Return to Ravenholm, also referred to as Ravenholm or Half-Life 2: Episode Four, was the working title of a cancelled Half-Life 2 spin-off developed by Arkane Studios from 2006 to 2007. The player takes the returning role of the HECU marine Adrian Shephard from Half-Life: Opposing Force on a trip to the zombie-infested European town of Ravenholm. It was planned to take place after the events of Half-Life 2 but before the end of Half-Life 2: Episode Two.[1] The concept of a Ravenholm-centered episode was inherited by Arkane after Junction Point Studios' own project was cancelled.[2] Arkane's project was eventually cancelled by Valve as well much to the dismay of its developers, who were "extremely emotionally invested" in the project.

Father Grigori's classroom, with his Headcrab juicing machine visible. On the left, Grigori stirs a pot of Headcrab stew. 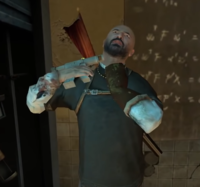 After the events of Half-Life 2, the unconscious body of the HECU marine Adrian Shephard is discovered by Father Grigori, who has taken refuge in a classroom in a large abandoned medical asylum somewhere in an abandoned city. It is unclear whether Shephard was taken out of stasis by the The G-Man or he was broken out of stasis by the Vortigaunts. Grigori, excited by the prospect of companionship, drags Shephard's body to his shelter.

Shephard eventually regains consciousness, immediately greeted with the sight of Grigori hastily running into the room and slamming the door shut behind him. Grigori comments: "I confess, I am en gladdened by your company. Too much solitude is not good for a man who like myself wishes only to serve." Grigori makes use of a machine rigged with live Headcrabs in order to extract their blood. He injects himself with the blood on the right side of his neck, which he believes helps build an immunity to their bite, and begins cooking Headcrab stew for Shephard.

Zombies abruptly swarm the room and destroy Grigori's barricades, forcing both of them to evacuate. From there, the two embark on a mission to escape the asylum, the city, and ultimately return to Ravenholm. Shephard helps Grigori work to get power back in the Eastern and Western wings of the city, so that they can escape. How and why Grigori escaped Ravenholm in the first place, as well as why he wants to return, remains unexplained.

Throughout the course of the game, Grigori grows addicted to injecting Headcrab blood, causing the right side of his neck and head to mutate, something he initially tries to hide from Shephard by wearing a hooded jacket. Once the mutation reaches a peak, Grigori "explodes" and appears as a monster. Arkane developers declined to explain the game's ultimate ending.

Much like Half-Life 2's Ravenholm, the game was to feature various devices that would aid the player in their fight against zombies, including a Movie projector that could distract a horde of zombies and electric Propeller traps. The gameplay appears to be largely focused on electricity, which in the form of arc discharge would propagate between broken outlets or torn power lines and nearby conductive objects, thus allowing creation of dynamic electrical networks. This mechanic was used in puzzles that required the player to provide power to certain appliances and could also be used offensively by making electrical traps for the enemies. The player's suit could provide protection from short-term exposure to electricity: a small amount of energy, indicated by the "Absorption" meter on the HUD, could be absorbed without dealing any damage. 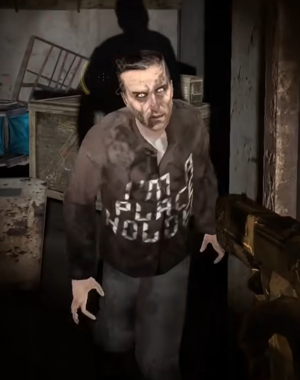 A Headcrab-less zombie in a brown citizen jumpsuit.

Zombies, Headcrabs, and Fast Headcrabs are all shown as returning enemies in gameplay footage. Curiously, however, no Headcrab Zombies or Fast Zombies are present.

Zombies are much faster than their Headcrabbed counterparts from Half-Life 2. They are also shown to have a more dynamic gore system, being decapitated and torn apart by Grigori's traps. Zombie AI was updated from Half-Life 2 to make them smarter and more dangerous. They attack in large hordes, and can be seen carrying melee weapons like cleavers and wood planks. Zombies are also distracted by flashy lights and loud sounds: there is a part of the game where the player rigs and projects a film on a wall to distract the zombies, who gather around the film to investigate the light and noise.

Acid Zombies are described as more resistant but slower than other zombies. They also fire a toxic projectile. Arkane clarified that their Acid Zombie was conceptualized and developed before the Spitter zombie from Left 4 Dead 2, which behaves in a similar manner.

Hostile Zombie Monkeys, which are the result of Grigori injecting monkeys with Headcrab blood, also appear.

Zombie Monkeys are nocturnal and afraid of light, so if the player shines their flashlight on one, it will run and climb to get away. Their AI seems complex and sophisticated: they can be seen intelligently climbing and jumping across walls to pounce into vents to get away.

Zombie Monkeys are shown throwing chairs and other physics objects at the player, but it is unclear if they have a bite or claw to directly attack. 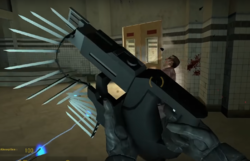 The Shotgun, SMG, and Pistol from Half-Life 2 all make returning roles, though they have been seemly re-animated. Due to a filename error in the Alpha build, for example, the Pistol incorrectly displays the texture for Half-Life: Source's pistol, making it look rather strange.

The player has the new ability to perform a Buttstroke with any weapon using its alt-fire. This is shown to be quite an effective way of taking down enemies at close range. It seems that this Buttstroke is intended to replace a melee weapon, as the player is never shown with a Crowbar or Pipe Wrench. 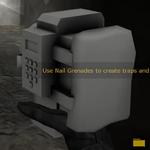 These nails carry electricity, which allows the player to create what is described as a "dynamic electricity network" to power appliances and solve puzzles.

Zombies also fry if they step across an electric current, so it can also be used as a defensive weapon against hordes.

The new Charge Gun charges when near sources of electricity. That charge can then be used to fire a large ball of energy that powers appliances and damages enemies.

Nail Grenades conduct electricity through their explosion. The infobox that shows up when the player picks them up reads "Use Nail Grenades to create traps and electricity currents". This is the only weapon in the build that has absolutely no texture; it appears entirely matte white.

An unnamed electric weapon is also ambiguously described as a tool to let the player "play with electricity". This may refer to the magnet gun described by Warren Spector and by Arkane elsewhere in the documentary, though this is unclear. The magnet gun is said to attract objects and enemies to each other, with an alternate ability to fire "spheres".

Shephard could also use a Leaf Blower weapon to "double jump" like in Quake, implying that he could use it to propel himself through the air by jumping and firing the Leaf Blower at the ground.

All weapons aside from the Shotgun, SMG, and Pistol have unfinished placeholder textures.

Following the network intrusion of Eidos' servers in May 2011 and the subsequent data leak, community members report that among the leaked CVs are several CVs of industry developers who appear to have worked on an Arkane/Valve project built on the Source engine from 2006 to 2007. In some CVs, the project goes unnamed, but in others, it appears to be titled "Half-Life 2: Episode 4", "Ravenholm", or "Return to Ravenholm". These individuals include Sébastien Gaillard, Nims Bun, Florent Perrin, and Régis Capotosto.[3][4] Most of the CVs have since been edited to remove any mention of the project or Valve.

On January 13, 2012, Marc Laidlaw confirms to LambdaGeneration that a fourth and now cancelled Half-Life 2 episode, titled Return to Ravenholm, was being developed by Arkane Studios from 2006 to 2007. He states that as big fans of Arkane and their work, Valve wanted to come up with a common project that both studios could work on. Valve threw ideas around, and Arkane built "some cool stuff", but Valve eventually decided that it didn't make sense to pursue Return to Ravenholm at the time. They felt like a lot of the staples of Ravenholm (Headcrabs and Zombies) were pretty much played out, and the fact that it would have to take place sometime before the end of Episode Two (so as not to advance beyond where Valve had pushed the story) represented a creative constraint that would hamper the project, as well as Arkane themselves. Episode Four and Return to Ravenholm are also confirmed by Laidlaw to be the same game.[1]

In the following years, some assets and images related to Arkane's project are revealed. On January 11, 2013, four screenshots of Return to Ravenholm are uncovered.[5] On June 3, 2013, several model renders of assets intended for the game are discovered, many reinforcing the idea of a hospital location.[6] On December 5, 2015, eleven additional screenshots from the project are revealed from the portfolio of Robert Wilinski, a Senior Environment Artist at Arkane between 2007 and 2008. The environment on display here depicts a dilapidated underground area with elements suggesting a relation to the previously seen hospital.[7]

On November 4, 2016, Arkane Studios art director Sébastien Mitton confirms that the player wouldn't have assumed the role of Gordon Freeman, but "a different, very interesting character."[8].

On October 31, 2017, ValveTime publishes Marc Laidlaw's e-mail in which he reveals that before Arkane started working on Return to Ravenholm, Junction Point Studios founded by Warren Spector was to be the studio responsible for developing a Ravenholm-centered Half-Life 2 episode. When Valve decided Junction Point Studios couldn't do it, Spector's version of the game was cancelled and the concept was passed along to Arkane; they started again from scratch. Laidlaw comments that he believes "Arkane stuck more closely to the atmosphere of horror" than the previous studio.

On May 26, 2020, the YouTube channel Noclip released a documentary about Arkane studios' projects called "The Untold History of Arkane: Dishonored / Prey / Ravenholm / LMNO / The Crossing". The video provides almost all of the known information about the secretive project.