"Well, we're in luck. There's a generator in the square outside. We're trying to disable as many as we can to loosen the Combine's grip on this sector."
― Alyx Vance[src]

Combine power generators come in several types and supply energy to various pieces of Combine technology. They are mainly found within the Citadel, but can also be found in certain locations in City 17, such as the Overwatch Nexus and the plaza visited in the Half-Life 2 chapter Anticitizen One, or near the White Forest Inn, in the Outlands.

Run by Energy Balls and often protected by Force Fields, generators are used to power devices such as Force Field gates, powered bridges, locks, or weaponry such as the Suppression Device. There are many more generators in the Citadel than anywhere else, supplying power to systems in the immediate area.

Anyone unlucky enough to step into or to be thrown inside a generator field will be disintegrated, just as they would be if they were hit by an Energy Ball shot by a Pulse Rifle. The Energy Balls launched from the Pulse Rifle are similar to that of the generators, but the latter are much more powerful, capable of damaging or destroying vehicles and Synths, such as the Strider confronted in the Citadel in Half-Life 2.

With the modified Gravity Gun in Half-Life 2 and Episode One, the player can throw enemies in generator fields and use Energy Balls against them, leading to often spectacular deaths.

This type has a core with Energy Balls floating within, which create a beam of electricity that runs from the top to the bottom of the generator. The Energy Balls are the actual objects that generate the power, as when they are removed (with the Gravity Gun, for instance), the generator will cease to function. To restart it, a new Energy Ball must be replaced (it can be achieved with the Gravity Gun or the Pulse Rifle). Generators powering critical systems typically have about three orbs inside them, but ones that power smaller devices will have just a single one.

This kind of generator is the one featured in the Overwatch Nexus, the plaza visited in the Half-Life 2 chapter Anticitizen One, near the White Forest Inn and the Barn Advisor. Most of the time the player must shut it down through Combine interfaces to proceed, while having to protect Alyx or Barney at the same time, sustaining heavy fire from Combine troops.

This other type is found only in the Citadel and has a constant flow of Energy Balls passing along a glowing white beam. These generators are often found in large elevator shafts and open areas found in the Citadel. It is however unknown if these are actual generators or if they just transport Energy Balls (vents located around the Citadel Core seem to fill the latter purpose).

Horizontal limitless Energy Ball-powered generators also exist. They feature sockets similar to that of the Confiscation Field and pod cleaners.

In Episode One, another type of generator can be found, resembling a wall socket. It is seen mostly in the lower levels of the Citadel and acts as a "system activation node", allowing the player to start equipment such as powered bridges or the Citadel Core's containment devices. This type of power generator can be activated by launching an Energy Ball into its center, causing its four arms to retract inwards to hold it in place and begin to siphon energy from it. Two of these need to be operational if powered bridges are to be in function, as a powered bridge consists of a pair of lasers, one per generator.

Stalkers always try to shut down player-activated generators of this type by popping the energy pellet with their face-mounted lasers.

This type of Combine generator is similar in function and appearance to the Aperture Science High Energy Pellet socket seen in the Aperture Science Enrichment Center, although the possible connection between the two is unknown, and the arms are only three, folding outwards into a flat accordion instead, placing 3 shields along the edges.

Only seen in the Citadel and not using Energy Balls, this type consists of a large cylinder made of liquid matter, with a solid base and top. This liquid matter is likely the same liquid seen in Combine Barricades. It does not seem to be contained in any particular vessel and yields no visible side effects other than massively reduced velocity while surrounding any thrown object or being with blue particles. The central beam however causes instant disintegration upon contact.

Another type of generator, sometimes used on itself, is sometimes located near an Energy Ball-powered generator or a Combine Heavy Door. It is prominently featured in the Overwatch Nexus. Its model is also used in the pod conveyors in the Citadel, where two are seen linked together by a laser, acting as detectors for Combine Prisoner Pod contents, and as an alarm light in the Citadel's core control room or the booth near the Depot's teleport platform where Alyx traps Mossman.

The mini reactor is featured with the Citadel schematics on Alyx's whiteboard at her hideout, where it is first referred to as such. At the beginning of Half-Life: Alyx, in a video conversation between Alyx Vance and her father Eli Vance and Russell, the latter two are shown heisting one such reactor from the Combine.

Introduced in Half-Life: Alyx, this type of generator consists of farms of Combine Prisoner Pods that contain enslaved Vortigaunts inside. The generator tortures the Vortigaunts and forces them to sing in order to extract the power of their Vortessence chants. The power output is then re-harmonized by a single "conductor" Vortigaunt via tuner apparatuses connected to cables.[1] When nearby, the slow, groaning chants of the Vortigaunts trapped inside can be heard.

While utilized extensively at many places, the most prominent use of such generators is at the various substations scattered throughout the Quarantine Zone and connected to the hovering Vault located above the area, and are used to keep the G-Man imprisoned inside. During Alyx, Alyx powers off the substation at the Northern Star by freeing the conductor Vortigaunt from its cell, who promises to liberate his other kinsmen and sabotage the remaining substations. 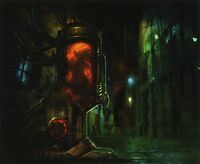 Concept art for the Vorti-Cell.

The idea of a Vortigaunt-based generator was first conceived during the development of Half-Life 2, as the "Vorti-Cell", designed by Dhabih Eng. This cell featuring a transparent panel showing the Vortigaunt inside in orange light was to be used throughout City 17 as a station siphoning power from trapped Vortigaunts as Gordon Freeman attempted to free them.[2]