Garry's Mod, or GMod for short, is a sandbox modification for Half-Life 2. It allows the player to manipulate objects and experiment with the physics of the Source engine, often with interesting results due to the power of the engine. Being a sandbox type game there is no goal as such or a way to win, rather users are able to modify the game and play the mod however they wish. Many different gamemodes have emerged with many different objectives and styles. Some even choose to remain in the sandbox mode to construct contraptions or scenery with the props and maps from most of Valve's games.

The current version of Garry's Mod is version 13, which still receives regular updates via Steam. An older, unsupported version, 9.0.4, is available as a free download at download.com, and is also available from Steam free of charge. Version 10, now known simply as Garry's Mod, has been available for purchase on Steam since November 29, 2006. It requires at least one Source engine game in the user's account to play, and therefore is offered in a reduced-price bundle with Counter-Strike: Source or Team Fortress 2 for those who do not meet that criteria. Valve also no longer categorizes Garry's Mod 13 as a modification, but rather as a full game, due to its ubiquity and popularity.

Garry's Mod is a game modification, created by Garry Newman in 2004, and a successor to JBMod, the original sandbox Half-Life 2 modification.[1] While GMod does not possess any actual gameplay value in a traditional sense, it enables the player to freely manipulate all of the objects and features of the Source engine except for the background features. As mentioned, this has allowed an extensive community to build up and create other mods and mini-games to distribute within the built-in workshop function in GMod'. GMod can be used as a map editing tool that interfaces with Valve Software's proprietary editor Hammer to add furniture and small items through its first person interface, letting users graphically interact with their map. GMod 9 is the last free version of the modification, and was last updated to version 9.0.4 on the 27th of November 2005.[2] Garry's Mod (previously known as GMod 10) is the first commercial iteration of the mod. It was released on 29th November 2006.[3] 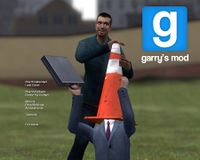 The old, and most iconic, Garry's Mod 10 game menu. 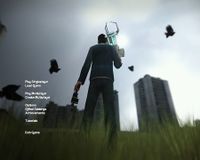 Most players familiar with Garry's Mod before its commercial release refer to the latest version as Garry's Mod 13. The current version of the game does have a price tag and also requires a Source engine game to run. Essentially, almost all functionality within Garry's Mod (tools, constraints, shaders, menus, etc.) can be altered using Lua scripts and therefore can be heavily customized by the player.

Features of the mod include:

According to The Steam Review Valve had given Garry Newman the full Source engine source code to overcome the limitations of the free Source SDK, in exchange for 50% of the profits from Garry's Mod 10.[4]

The tools of GMod are the most essential part of the game as they allow various aspects of the map the player is on, and the Source Engine in general, to be manipulated to create a variety of effects and contraptions, which are user built machines made from in-game props that can perform a variety of function.

Manipulates, rotates and freezes objects in mid-air, everything from ragdolls (used to create comics and ragdoll poses, with interesting results) to props. It is a slight edit of an original unused physics cannon script in Half-Life 2's code. It uses the skin of the supercharged Gravity Gun and the slightly altered icon of the Tau Cannon.

Camera Gun
Appearing as a cell phone to other players, this weapon or tool allows the one using it to take screenshots by clicking the left mouse button. The HUD and the weapon viewmodel are removed while using this.
Tool Gun

A new gun introduced in Garry's Mod that replaced the crossbow tool gun in earlier versions of the mod. The Tool Gun allows the player to use the many tools in the game such as; Rope tool, Weld tool, Balloon tool and the Thruster tool. 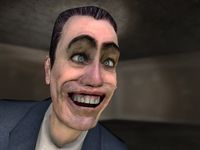 An exaggerated facial expression as seen on the G-Man.

Face Poser tool
Gives the player the ability to adjust the faces of ragdolls, and was first seen in Version 6a.
Paint Tool
A tool-gun which gives the player the ability to paint decals such as blood, bird excrement, beer splash, alien blood and other substances onto different surfaces such as walls, objects and ragdolls.
Spawn Menu
The player can spawn items or "props" into the map by using the spawn menu (opened by pressing and holding the Q key). This menu gives the player access to most physical objects, such as rocks or furniture, and character ragdolls, such as enemies and characters.
Camera Tool
This tool lets the player create a camera in the world that, upon the pressing of a designated numpad button, can shift the player's view to where the camera is pointing in order to see the world through the cameras eyes.
Rope Tool
Allows the player to make a rope between two solid surfaces such as; Walls, Ragdolls, NPC's and Props. The player can set how wide the rope should be and what it looks like.
Weld Tool
Allows the player to weld two objects together or to weld an object to a wall. The two objects will be tied together, essentially creating one object from multiple ones.
Pulley tool
The pulley tools takes four steps. The first step is selecting the object to be attached to one end of the pulley. The second and third shots are anchors for the constraint, where the rope must go through. (The pulleys) The last step is selecting the other end of the constraint. This tool can be used to let an object move along the pulley rope in a way that real pulleys work.
Axis tool
The axis tool creates a point on which an object will rotate on another object.
Ball socket tool
The Ball Socket tool lives up to its name: It creates ball-and-socket joints on which an object can pivot and rotate in any direction.
Balloon Gun
Attaches floating balloons to all kinds of objects. The upward force of a balloon can be altered. The balloons themselves used to be watermelons that had been altered to fall upwards, i.e. as if they were filled with helium. As of GMod 9, the watermelons have shiny, flat color textures to appear as balloons, as opposed to previous versions where they were merely watermelons with different colors. In Garry's Mod 10, a proper balloon model was implemented to be used instead of any re-textured and recolored watermelons.
Thruster Tool
Attaches thrusters to an object or wall that can be controlled by the number-pad. They are essential in the function of flying contraptions and applications where land vehicles are simply not efficient or fast enough with wheels.
Wheel Tool
Attaches rotating wheels to anything. Once applied, the player can control the direction and speed of the wheels. There are many different types of wheels, ranging from actual car tires to saw-blades and barrels.
Color Tool
Allows players to change the colors of objects or certain walls using RGB sliders.
Material Tool
Changes the textures of objects. Can be used in conjunction with the Color Gun to create props that are many different colors and textures.
Magnetise Tool
Converts ordinary objects, regardless of their materials, into magnets which attach to any object or ragdoll. This tool also has a few interesting side effects, such as making breakable props unbreakable, removing all constraints from a prop and unfreezing frozen props when used. The magnetism can be altered via a slider.
Dynamite Tool
Creates remote explosives that can be set off with a button on the keyboard. The player can control how power the explosion is. Dynamite has many uses including cannons and traps in-game.
Post Processing Effects
There are a number of post-processing effects that can be utilized in Garry's Mod. Some examples are depth of field - a blur effect that simulates how a camera/eye lens focuses on different distances. Bloom: an effect which causes light to spread or is an important component of HDR rendering. Color Mod: an effect that allows the way and the color intensity of the world for the player to be changed. Not all graphics cards support these features.

Thanks to the implementation of Lua code for Garrys Mod 13, there are countless scripted modifications for Garry's Mod. These can range from simple mods with increased life or speed, to incredibly complex gamemodes, to SWEPS (Scripted Weapons) or STOOLS (Scripted Tools) that can be distributed through the workshop. Some of the more popular game modes are:

Some of the most popular addons are:

Many users on Garry's forums, Facepunch Studios, have used Garry's Mod to create movies. Some examples are:

GMod has also become a tool for users to create music videos, comics and other forms of Machinima. For example the web-comic Concerned, which parodied Half-Life 2, was made using GMod.

Currently it is the most popular third party modification for Half-Life 2 with online player counts beating popular Half-Life mods such as The Specialists and Sven Co-op.[6]

As seen above, many different "Mini Mods" or gamemodes have been made by users. An example is "Wooden Wars", where teams make vehicles or buildings out of wood, and then add weapons made up of anything from gas canisters with thrusters on, to shells launched from "home made" cannons. They then destroy the other team's work.[7] It was even featured on the G4 series X-Play during a Half-Life 2 special episode as the best mod for the game.

Garry's Mod has a thriving internet community based around the game. There are multiple forum websites and servers creating smaller communities within the community at large. The official GMod related community is FacePunch Studios, the website run by GMod creator Garry Newman.

Garry's Mod 9 has won three Mod of the Year awards: