Get Your Free TVs! 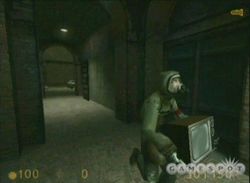 The only known official image.

Get Your Free TVs! was the very first Half-Life 2 test level to be created in 2000 when the Valve development team had only a rough script of the game, some concept art and was experimenting the new technology. It consisted of a test sequence designed to highlight all the new technology created for the game and test the NPCs and physics, not to be included in the final product.[1] Working on a very early version of the Source engine (reusing Half-Life’s HUD), this sequence was the real start of the game's development. It was presented at SIGGRAPH 2000, as part of a closed-room demo.

The concept was to simulate a street war between rioting gas mask Citizens and the Metrocops sent to contain them. Such a sequence would test the engine's ability to create a vast, believable world and lifelike characters. There would be APCs and tanks rolling down the streets. Citizens would throw Molotov cocktails at the vehicles, which would then explode. Other characters would start looting stores and yell, "Get your free TVs!". There was even a hand-to-hand fighting system so the Metrocops and Citizens could get into fistfights, a feature never implemented or seen in the final game.[1]

The small map used for the demonstration can be found in the WC map pack under the name city_test, albeit with some differences. It can be found as revisions 03 to 09, made from December 2000 to July 2001. It was also reused as testroom_signage (September 2001) showcasing Combine posters, billboards and technology.