Half-Life 2: Deathmatch, usually abbreviated as HL2DM, is a multiplayer first-person shooter video game developed by Valve Corporation. Released on Steam on November 30, 2004,[1] it uses many of the assets from Half-Life 2, and the same Source engine. It features unique levels, optimized for multiplayer arena play, and two new weapons. The game is the successor to the popular multiplayer component of the original Half-Life, but is offered as a separate product from Half-Life 2. Deathmatch, like Half-Life multiplayer, does not develop any part of the plot or story of the Half-Life series. 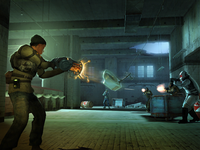 The Deathmatch (commonly abbreviated as DM) mode, includes more of the features seen in other games that can be played in deathmatch mode. Of these features, the most notable are: instant respawn, weapons have a specific spawn point, quick traveling and special abilities (sprint, flashlight, etc).

The point of the deathmatch is simple: the player must kill other players to score points, and if the player accidentally kills himself, they would lose points. If a player is killed, they will respawn with 100 health points and the default spawn weapons, but will lose all the weapons and ammunition they had before being killed.

In the Team deathmatch (commonly abbreviated as TDM) mode, players are organized in two teams, Rebels (Red) and Combine (Blue), both of them with different characters that appear exactly as they do in Half-Life 2. In the gaming aspect, TDM has almost the same rules like in deathmatch mode, except for:

The Half-Life 2: Deathmatch weapons are shared with Half-Life 2 with several differences (in use but not appearance) with the exception of the S.L.A.M, exclusive to the game, and the Stunstick, originally only used by Civil Protection.

Half-Life 2: Deathmatch features 8 maps, several of which are based on existing Half-Life 2 maps with several differences, others being exclusive to the game.

Upon the release and subsequent critical reception of Half-Life 2, reviewers expressed disappointment with the game's lack of multiplayer.[2] Two weeks after the initial release of Half-Life 2, Valve revealed and released Half-Life 2: Deathmatch on Steam, simultaneously with the Source SDK as a means of promoting game modifications built upon the platform.[1] Post-release, the game was supported with new maps from Valve as well as updates to the game and its engine.

Valve's The Orange Box does not include Half-Life 2: Deathmatch, however, the game was upgraded to use the Orange Box version of the Source engine in September 2010. In the same month, Deathmatch was released via Steam for macOS.[6] A Linux version came more than two years later, in March 2013.[7]

Half Life 2: Deathmatch received highly positive reviews with IGN giving it 9.7/10[8] and GameSpot giving it 9.2/10.[9] The latter lauded the game for the Source engine's "impressive use of physics" and the available selection of maps.[9] IGN paid similar compliments to the title, also speaking highly of the "fast play style that [Half-Life 2: Deathmatch] produces."[8] Multiple reviews stated that the game suffered from large amount of lag upon release, but GameSpy noted that this was remedied soon after as more servers came online.[10]