Prior to the Seven Hour War, City 17[1][10] was a grand city in an unknown Eastern European region.[11] Later taken over by the Combine as one of their numerous Cities, it was their main headquarters on Earth, home to Earth's administrator Dr. Wallace Breen.[1] Dominated by the imposing Citadel and surrounded by the desolate Wasteland, it was the only location of Half-Life 2: Episode One, and one of two major locations in Half-Life 2. 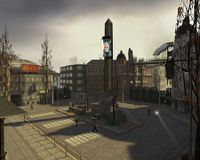 The Trainstation Plaza, under surveillance by Civil Protection units and equipment, with a "Breencast" monitor, which Doctor Breen uses to address City 17 citizens.

这座城市的核心主要由一栋栋一栋的建筑组成，由各种新旧建筑组成的低层建筑群。苏维埃风格的公寓楼在这座城市也有着明显的风格。在合并规则下，一些城区被划分为半隔离区，许多住宅楼被用作市民的住所。.[1] 这些住房的条件通常很差，实际上与贫民窟大同小异，很少有奢侈品，而且经常受到 国民护卫队的压迫.[1][12] However, some city infrastructure, such as power plants, were maintained by the Combine, and electricity was made widely available from both traditional sources and Combine generators.[1] The Combine themselves occupied some former government buildings, such as the Overwatch Nexus, to help keep control over the city.[1]

The city was large enough to provide all necessary needs for the citizens before the Combine's occupation. This is supported by the appearance of a hospital, several cafés and restaurants, office buildings, and underground city systems; much of said infrastructure was still relatively intact but disused.[1][13][14]

As there was little emphasis in maintaining non-essential parts of the city, many areas of City 17 suffered from urban decay prior to the Citadel's explosion.[1]

A Combine Razor Train passes by a canal and residential apartments.

City 17's transportation system had considerable variety. In addition to highways and city streets, City 17 included underground road tunnels that traveled beneath the city; during the Resistance uprising against the Combine, portions of the tunnel could be seen, badly damaged, with areas flooded with toxic substances.[1] Several railway lines ran throughout the city, with at least two large train stations connecting City 17 to other Combine controlled cities.[1][13] The Combine maximized the use of these transportation systems, developing ground-based APCs to patrol roads while utilizing pre-invasion trains and their own form of trains to transport citizens and goods in and out of City 17.[1][13][14] The presence of unused tramways on a street also suggest that the city once provided tram services before the Combine rule.[1]

A network of canals was also prevalent in and around City 17.[1] Much of the inner city canals, however, were made defunct after the Combine's draining of large bodies of water around City 17 left much of the area's canal system dry.[1] However, the industrial district canal systems remained usable, albeit shallower, with certain portions of the canals contaminated with hazardous materials.[1]

Gordon was pulled from stasis by the G-Man and left standing in a train pulling into a station. Leaving the train after hearing the other passengers comment, "I didn't see you get on," Gordon faced a large screen monitor with the administrator, Doctor Breen, smiling calmly down at the depressed citizens and welcoming them to City 17.

After failing a security check, Gordon was taken away by a Civil Protection officer for interrogation. Fortunately, he was delivered to an undercover Barney Calhoun who helped him escape from the train station. Exiting the station, Gordon finds himself in a plaza, with the ever imposing Citadel far ahead, and further evidence of the Combine's power in the city. Gordon's brief journey through the city revealed the level of repression by the Combine, and the level of fear and dread among citizens.

After stumbling his way into a building being raided by Civil Protection, Gordon is identified as a "miscount"[15] and is pursued by Civil Protection units over the rooftops and ledges of buildings before being rescued by Alyx Vance. Alyx brings Gordon to Dr. Kleiner's lab in a nearby building. There, Gordon is fitted with an HEV suit and is set to be teleported with Alyx to Dr. Eli Vance's lab in Black Mesa East. While Alyx successfully arrives at the destination, the teleport malfunctions as Gordon is about to be teleported, sending him to several locations (including Doctor Breen's office in the Citadel), and eventually back to City 17, just outside Kleiner's lab.

After being given a Crowbar from Barney, Gordon is advised to venture along railway lines, canals, sewage systems, and the wider canal routes to leave City 17 and reach Black Mesa East. Along the way, it is learned that parts of the route are also under attack by Combine units. An alert was put out from the Citadel to capture or kill Gordon after the teleportation incident at Breen's office. As Gordon reaches the wider canals, an Airboat is prepared by rebels to transport Gordon out of the city. As he rides the Airboat, Hunter-Choppers and additional Combine units pursue him once more, but are eventually evaded and defeated as he reaches Black Mesa East and escapes the city.

A view over City 17 from the Citadel, as seen by Gordon Freeman in a Stalker pod. The skybox texture used to represent City 17 from a bird's eye view is actually a nighttime satellite image of New York City, showing the Downtown and Wiliiamsburg areas of Brooklyn, a portion of Maspeth in Queens and parts of the Lower East Side of Manhattan (see Google Maps for comparison).

After Gordon and Alyx's failed attempt to rescue Eli and associate Judith Mossman at Nova Prospekt (in which Judith ends up teleporting Eli to the Citadel), they attempt to teleport back to Kleiner's lab, but find that they have reached their destination a week later in time, although it seems to Alyx and Gordon as though their teleportation was instantaneous. They learn that Gordon and Alyx's attack on Nova Prospekt sparked an uprising among City 17's citizens that sent the city into chaos: Combine units and citizens are fighting against each other, and powerful, more lethal weapons and equipment are being deployed in full force, damaging much of the city. While Gordon and Alyx race to the Citadel to rescue Eli, Alyx is knocked out, captured, and brought to the Citadel. Gordon eventually reaches the foot of the Citadel, with the aid of Barney and Alyx's robotic pet, Dog, and enters the structure to rescue Eli and Alyx and to confront Doctor Breen.

The final stage of the game reveals that Gordon, upon releasing Eli and Alyx and damaging the dark energy reactor that would power Breen's teleportation off of the planet, was about to trigger a massive explosion of the reactor that would "bring down the whole Citadel" and destroy the entire city. At the moment of the reactor's explosion, however, the G-Man reappears, stopping time, and transports Gordon back into stasis to await further assignment. 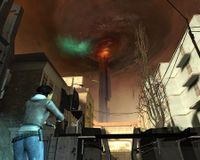 "You two have to get out of the city! The Citadel could blow at any moment!"
― Eli Vance[src]

Half-Life 2: Episode One takes place against a backdrop of a mass exodus from the doomed city, at the heart of which the Citadel has become a ticking time bomb. Hoping to open a portal to send valuable information back to the Combine leaders, the surviving Combine soldiers inside the Citadel deactivated the containment system for the Citadel's core. Though Gordon and Alyx managed to reactivate the system, it only bought a short amount of time. As they moved farther away from the Citadel, they witnessed its condition deteriorate. 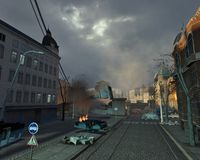 A ravaged City 17 street, close to the walls of the Citadel.

The city itself, especially the regions closest to the Citadel, had been damaged beyond recognition by Striders following the events of Half-Life 2, though regions farther out, such as a hospital and the train station, were still intact. Most of the railroad infrastructure was undamaged, though any train leaving the Citadel was subject to falling debris. Antlions roamed the city unchecked, and the remaining Combine forces struggled to keep order in the ruins.

The citizens of City 17, heeding the warnings of the Resistance, were all but gone during Gordon and Alyx's flight from the city. Only a few remained, pinned down by any surviving Combine troops and Civil Protection units. Thanks to the efforts of Gordon and Barney Calhoun, the last of the city's citizens were evacuated via train, despite the best efforts of the surviving Combine forces.

When the Citadel detonated, the explosion was powerful enough to send debris flying for miles and landing outside city limits. 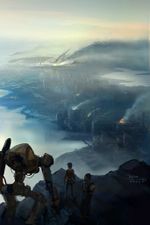 Concept art of Alyx, Dog and a rebel watching the destroyed city.

In a scene from Half-Life 2: Episode Two, the remains of City 17 can be seen from the countryside. A tornado-like vortex can be seen rising from what was the Citadel, and the center of the city is scattered with pieces of the Citadel. The outskirts of the city appear no less damaged and it is doubtful that there is anyone left alive in the ruins.

"One of the reasons that we liked Eastern Europe as a setting was that it represents the collision of the old and the new in a way that is difficult to capture in the United States. You go over there, and you have this collision between all of these things, the new architecture, the old architecture, the fall of communism...there's a sense of this strongly-grounded historical place. We left out the Gothic themes associated with Prague and vampires and looked into a different aspect of the region."
― Viktor Antonov[src]