Following the events of Half-Life 2, Episode One starts with Gordon experiencing some kind of vision or flashback that shows the explosion of the Citadel's Dark Fusion Reactor. As time stops, several purple glowing Vortigaunts appear and rescue Alyx Vance. The G-Man is then seen walking through the door made of light toward Gordon Freeman. As he opens his mouth to say something, he is distracted by blue lights and is separated from Gordon by another group of Vortigaunts. Several of them surround the G-Man and block him off from Gordon with a blue energy shield. Angered, he straightens his tie and looks at Gordon while saying in an irritated tone: "We'll see...about that." More Vortigaunts then surround and teleport Gordon, in the same manner as Alyx, removing them both from stasis.

Gordon wakes up outside the Citadel, buried under a pile of rubble. Dog digs Gordon out and he is reunited with Alyx, who embraces him. She contacts her father, Eli Vance, and Dr. Kleiner to inform them that Gordon is safe. Kleiner tells Alyx that the Citadel Core is at risk of exploding at any moment. Kleiner states that the explosion could be large enough to level the whole of City 17 and that the only possible way to survive would be to re-enter the Citadel and slow the core's progression toward meltdown. Eli interrupts, showing distress at placing his daughter in further danger, but reluctantly agrees when he sees no other option. Alyx and Gordon re-enter the Citadel to try to reactivate the stabilization mechanism for the core in order to avert disaster.

During the pair's time in the Citadel, they discover a recording of the discussion between a Combine Advisor and Dr. Breen before his confrontation with Gordon in Half-Life 2. Breen reprises his words, saying: 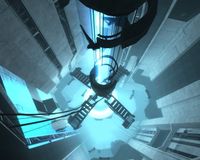 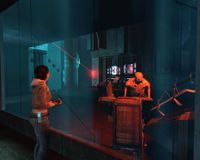 This chapter consists of Gordon Freeman entering the core to help slow down the meltdown. Afterward, they make their way to one of the still running Razor Trains and begin their journey to escape the city.

Later on, Gordon and Alyx are successful in re-engaging the reactor's containment system, delaying the explosion. Alyx subsequently discovers that the Combine are trying to use the reaction, and therefore the destruction of the Citadel, to send a message to off-world Combine forces. There is also a message from Judith Mossman, from an arctic environment north of City 17. She is talking about a Project which she and her team had discovered, but the Combine attacks the base and she had to cut the transmission. She is able to run away, presumably to safety, before Combine troops, and an unknown enemy invade the area she had been filming in. Alyx makes a copy of the message packet to take to Dr. Kleiner and Eli, ensuring that the Combine make them their prime target and even in their disorganized state use everything they have to stop them. 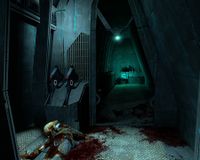 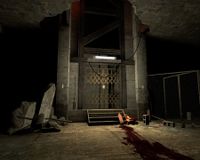 Alyx is trapped under a Combine Prisoner Pod with a restrained Stalker viciously attempting to break loose, relying on Gordon to set her free. After escaping from the train, the duo fights through the rubble of dark, deserted, underground parking garages and tunnels, searching for a way to head up to the surface of the city. In the process, they block off Antlion burrows, and battle various zombies in a pitch-black environment, including zombified Combine soldiers, which were never seen during Half-Life 2. These zombified soldiers, referred to as "Zombines" by Alyx, are a prominent sign that the Combine is losing control of City 17.

After Alyx opens the first EMP Field Gate, if the player zooms in on her face while standing next to her, she will nervously look away playing with her hair, and then look up at the player, smiling. She will do the same thing after leaving the underground in the next chapter, and again in Episode Two after opening the Radio Tower Base gate in Riding Shotgun.

Alyx and Gordon finally meet up with Barney Calhoun and a group of other survivors who are preparing to move on a train station in order to escape City 17. With the Combine still following, Gordon and Alyx split up from the group and move through a derelict hospital to draw the remaining Combine forces away from the refugees. Inside the hospital, Combine forces and zombies of all kinds are fighting throughout the collapsing structure, and hastily constructed defenses slow Alyx and Gordon down.