"Therefore, I repeat, evacuate City 17 at once, if not sooner! I cannot state this without enough undue emphasis!"
― Isaac Kleiner[src]

Dr. Isaac Kleiner is one of the main characters of Half-Life 2 and its episodes. An archetypal 'absent-minded genius scientist' (although somewhat more benign), he is a prolific author of several works on teleportation and interdimensional travel, and one of the few survivors of the incident that took place in the Black Mesa Research Facility. Later on, he becomes a key (if somewhat self-conscious) leader of the Resistance against the Combine, and a prime member of the Resistance science team. 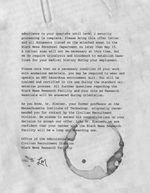 The second page of L.M.'s letter, where Kleiner is mentioned for the first time.

Kleiner first worked as a professor at MIT, where he was one of the mentors of Gordon Freeman. It appears that the two started their friendship already back then, and that Kleiner was quickly impressed by Freeman.[1] Kleiner would later take employment in the Sector C of the Black Mesa Research Facility, where he worked with Eli Vance and security guard Barney Calhoun.[2]

During this time, Kleiner appears to have become a widely recognized scientist, seeing that he is on the front cover of the magazine Popular Scientist, apparently in an article called "Next level of quantum physics", as well as the author to at least one book, From Here to There in Under a Second, likely about teleportation.[2]

When Freeman showed interest in a job at Black Mesa, Kleiner recommended him for employment in the Civilian Recruitment Division, and this recommendation combined with Freeman's experience at the Institute for Experimental Physics in Innsbruck, Austria,[1] ensured that he got the position instead of his competitor, Judith Mossman.[2] In Black Mesa, Kleiner would also compete for grant money with Arne Magnusson.[3] 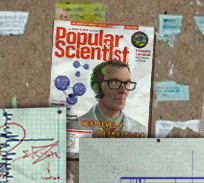 A brown-haired Isaac Kleiner on the cover of Popular Scientist. The hair was Photoshopped on a screenshot of his model.

Kleiner appears to have been working with administrative jobs prior to the Black Mesa Incident in Sector C, as he received carbon copies of several letters, from L.M. to other employees, such as his letter regarding Barney Calhoun's new Blue Shift assignment, sent on May 9, 200-,[4] and L.M.'s letter to Colette Green regarding the Xen crystal swap prior to the incident.[5] Kleiner also appeared to be a Hazardous Environment Supervisor or Instructor, as the Hazard Course Training Schedule sent by Gina Cross to Colette Green mentions that Kleiner was slated to instruct Green for a Hazardous Materials Handling on May 9, 200-, although it was postponed to June, and ultimately did not happen due to the Black Mesa Incident.[5] At this time, Kleiner was also on friendly terms with many co-workers, namely Gordon, Eli and Barney, although Richard Keller stated he did not understand what Kleiner was seeing in Freeman.[6] 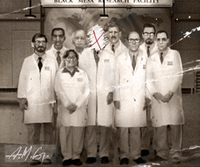 The Anomalous Materials team before the Black Mesa Incident. Kleiner is the third from the right.

When the Resonance Cascade and resulting Black Mesa Incident occurred, Kleiner managed to escape Black Mesa, although exactly how remains unexplained. Sometime after escaping the facility, Kleiner relocated to City 17, where he formed up the core of the local Resistance along with Eli Vance, Judith Mossman and Barney Calhoun. As Kleiner and Eli entered City 17, however, Eli lost his leg to a Bullsquid while helping Kleiner over a fence.[1][7] In the city, Kleiner set up a small lab beneath an abandoned Northern Petrol building located near the City 17 Trainstation, and began working on teleportation, among other works, while also staying in touch with Eli, who was working in Black Mesa East in the city's outskirts, as well as Mossman, and Eli's daughter Alyx, who was growing up.

Barney worked as a double agent for the local Civil Protection forces at this time, while in the meantime ensuring that Kleiner's Lab would go undiscovered and safe from the Combine. At one point, Kleiner finished his teleport, and tested it with a cat, apparently resulting in its death (which was apparently gruesome enough to mildly traumatize Barney Calhoun), forcing Kleiner to resume work on it. In this time, Kleiner also found a Headcrab, which he de-beaked, making it harmless, and named it Lamarr, before keeping her as a pet and, to an extent, domesticating her, much to the disdain of Barney. When Alyx grew older, Kleiner also worked with her and Barney to rescue Citizens from the Combine, and evacuate them through the Underground Railroad located in the City 17 Canals to Black Mesa East. At the time of Half-Life 2, Kleiner is finishing up his teleport. 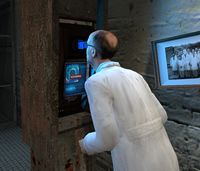 Kleiner operating a retinal scanner to open the door to the resurrected teleport.

Along with colleagues (and fellow survivors) Alyx Vance, Eli Vance and Barney Calhoun, he makes up the core of the Resistance against the Combine. Dr. Kleiner has set up a lab in City 17 in an old abandoned warehouse. A teleportation system, developed jointly by Kleiner and Vance, allows for near-instantaneous transportation between Kleiner's Lab and Vance's facility, several miles distant. As a pet, Dr. Kleiner keeps a debeaked Headcrab he calls "Lamarr". When Barney informs him that Gordon Freeman has arrived, Kleiner tells Barney to send Gordon on his way - although he forgot that Gordon would not know the way to the lab. Alyx eventually has to rescue Gordon and show him the way to the lab.

Kleiner proclaims that "This is a Red Letter Day" to Alyx, Barney and Gordon.

Kleiner then reintroduces Gordon to his HEV Suit which he has upgraded before sending him on his way to Black Mesa East, outside the limits of City 17. Unfortunately, Lamarr interferes with the teleportation process. Gordon is thrown through several locations before finally rematerializing outside the window behind Dr Kleiner. He is then required to leave Kleiner's Lab on foot and will not return until the City 17 uprising.

During the rebellion, Dog turns up to Kleiner who keeps him safe in his lab. Kleiner is apparently alone during most of the uprising (save for Lamarr) as Barney is leading on the rebellion fronts, so he protects himself with a shotgun. When Gordon and Alyx teleport in from Nova Prospekt a week into the rebellion, Kleiner is very optimistic about the Resistance's odds and tries to convince Alyx of this, at which he fails. He is not seen for the rest of the game but manages to escape City 17 at some point between when Alyx leaves to find Gordon and the start of Episode One.

A depiction of Kleiner's younger self can also be seen in the lab, appearing on the cover of Popular Scientist, a fictional magazine (and spoof of Popular Science magazine). In it, he sports sideburns and has more hair, which is seen as brown in color. Although this is a somewhat 1970s/80s look, the picture likely dates from around the Black Mesa Incident, thus in the mid to late 1990s. Below the magazine cover is a young Alyx's drawing of him, with the affectionate words 'Uncle Kleiner' on it. A book by Kleiner, From Here to There in Under a Second (likely about teleportation), can also be found in Eli's lab at Black Mesa East.

In Half-Life 2: Episode One Kleiner is not seen in person and is only spoken to directly once in a video transmission with Alyx during the first chapter. However, he is frequently seen during the later chapters on video screens and televisions previously reserved for Breencasts. This message is recorded and looped, simply instructing survivors to make their way to the nearest train station to evacuate City 17. Kleiner also amusingly informs people that the Combine's suppression field is no longer in effect so that "those so inclined should give serious consideration to doing their part for the revival of the species" to which Alyx comments, "is Dr Kleiner really telling everyone to... get busy?". The messages also include some vague information to try and rally people in the face of the fact that the Rebellion is only really beginning and will likely get worse before it gets better. It is likely that all these transmissions are broadcast from White Forest.

Kleiner, Eli and Alyx talking about the Borealis at White Forest.

Kleiner reappears once again in Half-Life 2: Episode Two. First, he is seen beside Dr. Eli Vance and Dr. Arne Magnusson on the first video communication with Alyx and Gordon; he is not seen again until later on when Alyx and Gordon reach White Forest (except during the G-Man's speech). He spends most of his time working with Dr. Magnusson on his rocket. Before the launch, Kleiner briefly notes Magnusson that there is an eight and a half pound anomaly, but Magnusson declares it is within tolerance and the rocket should be fired anyway. Unfortunately for Kleiner, the anomaly was Lamarr who had snuck onto the rocket while the nose cap was open earlier.

Towards the game's ending, when it is discovered that Judith Mossman found the Borealis, Kleiner is enthusiastic about the research contained on the vessel's use against the Combine, but Eli disagrees and states it could be responsible for another disaster on par with the Black Mesa Incident. After the rocket launch, Kleiner remains inside to help Magnusson with destroying the Combine Superportal while Alyx, Eli, Dog and Gordon go outside to see the Superportal dissipate.

Although Kleiner does not appear in person and he is not mentioned by any character, a copy of his book, "From Here to There in Under a Second", can be found in Alyx's Hideout.

Gordon Freeman was taught by Kleiner at MIT. He then recommended Gordon's position to the administration of Black Mesa, after which they became coworkers. At Black Mesa, Kleiner had apparently a habit of locking himself out of his office and Gordon would race Barney to "break in" to it.[8] Gordon became Kleiner's assistant again as a part of the human Resistance on Earth. He holds Gordon in the highest respects, even though he admits his heroic acts tend to cause trouble.

Dr. Kleiner probably knew Barney well through Gordon. Barney would often race Gordon into Dr. Kleiner's office via the air ducts to retrieve Kleiner's keys when he locked himself out. Barney would later aid Kleiner in the human Resistance in various ways, though mainly by working undercover in the Civil Protection, keeping the Combine away from his Lab, at no doubt tremendous risk to himself.

Kleiner and Alyx in Kleiner's Lab.

Dr. Kleiner knew Alyx when she was an infant at Black Mesa, and they were close enough for her to call him "Uncle" in a collage she made. In Half-Life 2 they both work together in his lab, and on sending refugees on foot through the canals.

Eli is almost the polar opposite to Isaac. He is laid back and confident, whereas Kleiner is reserved, logical, and cautious in most situations. Coincidentally, this is probably why they make such a good team. They have both known each other and worked together since the days of Black Mesa. Kleiner is also affectionately nicknamed "Izzy" by Eli on various occasions.

While Eli is the opposite to Isaac, Arne is simply headstrong with a very short temper. He has no patience for most of Kleiner's input and at times appears to give him many tedious and long tasks. Back at Black Mesa, the two competed for grant money. 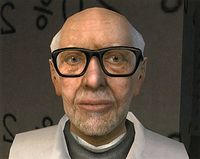 Kleiner in the Episode Two trailer.

Combine OverWiki has a list of quotes for Isaac Kleiner.
Retrieved from "https://combineoverwiki.net/index.php?title=Isaac_Kleiner&oldid=452732"
Categories: