"Welcome to the lab anyway. It's not Black Mesa, but it's served us well enough."
― Eli Vance[src]

Black Mesa East is a Resistance base located at the Wasteland end of the Canals outside of City 17. It is nestled inside the hydroelectric plant of a nearby dam and its reservoir, and right next to the abandoned mining town of Ravenholm. Black Mesa East is where Doctor Eli Vance, Doctor Judith Mossman, Alyx Vance, and many other Resistance members, including several Vortigaunts, used to live before its destruction. It was named after the Black Mesa Research Facility. (see below)

Black Mesa East is set several stories underground, and includes many facilities that make it self-sufficient, such as its own power generators recharged by Vortigaunts, kitchens where Vortigaunts can be seen cooking Headcrabs, recreational areas, and most importantly, Eli Vance's lab, where he is constantly refining the teleportation technology salvaged from the Black Mesa Research Facility, from which Black Mesa East took its name. Eli works with Isaac Kleiner, who also has his own lab, hidden in downtown City 17. They eventually established a working teleportation system between their labs that would have reduced any journeys on foot from City 17 to Black Mesa East, and finally eliminated the need for the Citizen-operated Underground Railroad, but Alyx Vance was the only person to be successfully teleported to Black Mesa East before it was invaded by the Combine.

The Vortigaunts at Black Mesa East appear to do a lot of the work around the place, such as preparing food or powering generators with their natural ability to generate electricity. They also help Eli around the lab, by manning computers or installing or powering parts for various machines. Another area briefly seen is the dormitories/barracks for members of the Resistance, which is shared by both Vortigaunts and humans. In this area Rebels rest and pass their free time.

All entry points to Black Mesa East are under constant surveillance by CCTV cameras, and contain decontamination chambers with heavy blast doors and turrets to hold anyone or anything that is not meant to enter. Black Mesa East is directly connected to Ravenholm via a tunnel that has been barricaded off since the shelling of Ravenholm took place, to prevent Zombies and Headcrabs from entering the facility. 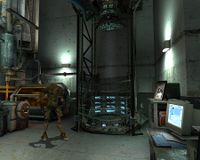 At the end of his journey through the canals, Gordon Freeman arrives at Black Mesa East for a short visit. He is greeted by Judith Mossman in one of the decontamination chambers, and she brings him up to speed on the scientific breakthroughs that have taken place in the last few months. She soon after takes him down to Eli's lab, where Eli and Alyx talk to him, and show him that much of the research begun at the original Black Mesa is continuing at this new facility. 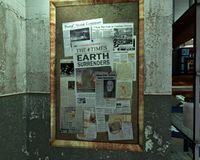 Newspaper clips revealing some details about the story setting.

In Eli's lab, Gordon also learns about events such as the Seven Hour War and the Portal Storms by reading newspaper clippings found in the lab: "Earth surrenders" on a cover of The Times with a picture of the damaged United Nations Headquarters in New York City under it, "Wallace Breen Declared Interim Administrator", "Black Mesa Admin Charged with Human Affairs Bureau", "Portal Storm Continues", "7 Hour War Ends in Combine Victory" and other unreadable newspaper clips. Other interesting things such as a Cremator's head in formaldehyde can be seen, as well as a machine, called the Rotato,[3] simulating a small Resonance Cascade, and containing a Xen crystal similar to the one used in the original experiment. Several books can also be seen (see below). Eli will make comments on various other things around the place, such as an old family photo containing him, Alyx, and his deceased wife, Azian Vance. The photo has been salvaged somehow from the Black Mesa East destruction and can be seen in White Forest.

Soon after Gordon arrives in Eli's lab, Alyx takes him to an outdoor scrapyard, and gives him training with the Zero-Point Energy Field Manipulator (or Gravity Gun) Eli built. Originally designed for heavy lifting and the handling of hazardous materials, Gordon finds a much better use for it - turning it into a weapon which will serve him well throughout the rest of his mission. Alyx also introduces Gordon to Dog, the robot built by Eli to protect her while she was young. Gordon and Dog play a game of fetch using a Combine Rollermine which has had its ability to electrocute people disabled, and use the Gravity Gun on various other objects such as crates, found in the scrapyard. Alyx also introduces the limitations of the weapon, ordering Dog to throw something bigger and stopping him upon choosing a dumpster the regular Gravity Gun cannot hold.

Black Mesa East is eventually raided by the Combine. They launch a massive attack using Scanners, Headcrab Shells, Hunter-Choppers in the air and Combine Soldiers in the facility. The Vortigaunts present attempt to fight off the internal attack, but are overpowered and Eli Vance ends up being captured and taken to Nova Prospekt. The raid was actually made possible by Judith, as it was revealed while watching a conversation she has with Doctor Breen over a screen at Nova Prospekt that she had provided him the information on Black Mesa East's location, during which her secret alliance with the Combine is revealed.

During the course of the raid, Black Mesa East is heavily damaged, and much of its personnel are presumed to either have escaped or been killed. Due to hallways being blocked off by rubble and collapsed ceilings, Gordon Freeman is forced to go through Ravenholm on his way to the Coast, as it is the only remaining exit from the facility. After this, Black Mesa East is not seen again for the rest of the game. 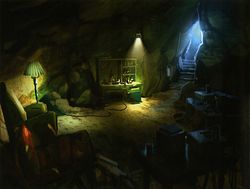 Some players have been confused about Black Mesa East being the "east" section or wing of the Black Mesa Research Facility, the research facility where the majority of Half-Life takes place. However, this is not the case - they are actually two separate places. The Black Mesa "Research Facility" was located in Black Mesa, New Mexico, USA, while Black Mesa "East" is situated outside of City 17, which is located in Eastern Europe, hence Black Mesa "East". A possible reason why "Black Mesa" is in the base's name is because it may have well been founded by Eli Vance, who originally worked at the Black Mesa Research Facility, and might have wanted the name to live on. The only things the two facilities share in common is the name, and that it is self-sufficient on its own level somewhat like Black Mesa. It is, however, doing similar research. Eli Vance explicitly states, "It's not Black Mesa, but it's served us well enough."