"Russ? Do you think a Headcrab could turn a gorilla into a zombie?"
― Alyx Vance[src]

The Central Zoo was once a comprehensive and well-equipped zoological park, and had its dedicated City 17 Metro station connected to line 5. However since the Combine occupation it has been cordoned off and deserted inside the Quarantine Zone. The Xen infestation there has been left unchecked, and the zoo is now swarming with Antlions, possibly being also connected to the vast colony underneath. Many of the zoo's former staff members were zombified by the roving Headcrabs and still roam the exhibits. As the habitats are now all emptied and in complete disarray, the previously housed animals have either long escaped or did not survive in the ensuing chaos of the Portal Storms and the Combine invasion, and the skeletal remains of some of them are still present on the grounds. The zoo also includes an aquarium, whose advertisements can be seen on newspapers. These aquatic exhibits are also in a state of disrepair, with most of the glass tanks either shattered or filled with Headcrabs.

Entering an embedded Combine seal in the Distillery, Alyx traveled to the zoo through the underground Antlion galleries. At the time of her journey, the facility appears to be already surrounded by Combine constructs such as smart barriers and watchtowers, and Overwatch troops are obviously trying to repel the various alien creatures there. However it seems that they have also suffered sizable casualties, evidenced by the corpses of soldiers scattered all around the place. Near the margins of the zoo, there is also a small Combine station similar to the ones in the Tanker Yard where several Antlions are being "milked" for their Cleanup Solution. 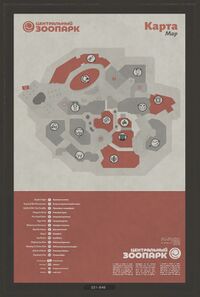 Map of the Central Zoo, detailing its various exhibits.

When the Central Zoo was still in activity, it was home of a large variety of animals and would showcase 14 different exhibits. The ones visited during the course of the game are marked by a red asterisk.

3D billboard for the "Морская рыба" (Russian for "sea fish") exhibit, written as SeaFishes on the zoo's map.

The bodies of Grunts strewn about the Reptile House exhibit.

The children drawings displayed near the gorilla's enclosure feature animals not found to be showcased in the zoo, including pandas, a lion, a narwhal, a sloth, bears, etc.

One of the rooms in the Zoo has headcrabs inside cages, suggesting that one of the zoo's workers has tried to raise them as pets, but was turned into a zombie themselves.

One of the zombies can be found "looking" at the children's drawings, and will not attack the player unless they are approached or provoked.