"Well actually, the word quarantine comes from the Italian, "quaranta giorni," uh, which means forty days — the period that all ships were required to be isolated before crew could go ashore during the Black Death."
― Russell[src]

The Quarantine Zone, dubbed the QZ for short, is a segregated area in City 17 established during the Combine occupation of Earth. Much of Half-Life: Alyx takes place within its boundaries.

In Half-Life, the rift opened by the Black Mesa Incident allowed alien flora and fauna from the Xen borderworld to infest areas of Earth. After their successful conquest of the planet following the Seven Hour War and the worldwide Portal Storms, the Combine established the Quarantine Zone to sequester the Xen infested sections of City 17 and prevent further propagation of alien species. The whole area is encircled with an outer wall made up of Combine Smart Barriers, and a second inner wall encompasses the area underneath the Vault, a large floating prison structure above the QZ in which the Combine had seized an entire apartment building to capture the G-Man within. Numerous Combine facilities and substations are scattered around the area, although there are scarcely any personnel manning them.

Considering the number of prominent buildings and facilities in the QZ, it may once been an important district of the city, but had since become home to a large number of hostile species such as Headcrabs, Zombies, and Antlions. The Combine organized a cleanup force known as Infestation Control who were sent inside to help combat the spread of the infestation, but this attempt apparently either failed or has been abandoned,[1] as many of those hazmat crews were killed or zombified and the infestation continues to run unchecked. As stated by Russell, the Combine is having difficulties dealing with Barnacle spores, and occasionally a Zombie still manages to escape the containment area.

Access to the QZ is monitored by the Combine. Only one access is directly seen during the game, as a large, unguarded hatch installed at the entrance of a train tunnel near the Underground station Metro Area, and controlled by a control panel installed at the damaged corner of a former railway interlocking tower. Railway access also exists, as seen by Razor Train traffic passing through the former Metro station Fairview Junction. Despite these security measures, intruders are still able to enter the QZ and survive in it. These include Gary, a lone Vortigaunt living in a tunnel hideout isolated from his peers after the Combine severed his connection from the Vortessence after drilling into his brain, Larry, a Human who has been living in the Golden Lion Distillery for several years, and briefly finally Alyx Vance, who was able to access the area through a hatch to go rescue her father.

At the time of the events of Alyx, the Quarantine Zone is said to actually have been deserted for several years, but Alyx had recently spotted the Combine moving supplies into it for unknown reasons. She ends up venturing into the zone during a mission to rescue her father and eventually discovers the existence of the Vault.

Hatch and interlocking tower at the entrance to the QZ. 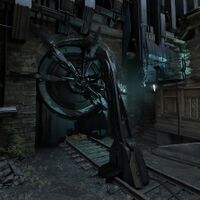 Closeup of the hatch.

Unused loading screen text suggests there are multiple quarantine zones due to the Xen infestation manifesting in localized areas of the planet.