"Gordon, I can't move. These snipers got me pinned down."
― Barney Calhoun[src]

The Combine Sniper[2][3] is a soldier class of the Combine Overwatch, trained in the use of the Overwatch Sniper Rifle.

Snipers are adept at marksmanship and will take leading shots, which means firing ahead of any moving target so the pulse from the rifle hits them dead on. They are encountered hiding in high, concealed areas where they can get a good field of view. Their bodies and weapons are not directly seen and are instead detected by the blue targeting laser the rifle emits and the gunshots they make. Even on Easy difficulty, snipers can anticipate the movement of targets and fire ahead; on Hard difficulty, they almost have a guaranteed hit and can take down a player without armor in 2-3 shots. Despite their accuracy, the rounds they shoot travel much slower than other types of ammunition, so sidestepping the shot is not too difficult at long range. They will also shoot breakable objects to limit the amount of cover available to the target or ignite inflammable barrels to damage them.

Snipers seem to take the doctrine "shoot anything that moves" quite literally, shooting at any living creature except allied Combine forces. An example of this behavior would be birds.

Snipers usually set up in well-fortified "nests", effectively invulnerable to ordinary gunfire. Explosives are a different matter, however, and if the player can get close enough, a hand grenade will blow the sniper out of his hole nicely. This is easier said than done, however, because the sniper often spots the player before they're within dangerous range, so the player has to avoid his fire to get close enough. The Submachine Gun's secondary fire and the RPG's rockets are also ideal and can substitute for grenades. Another alternative is to practice using the Gravity Gun as a grenade launcher to extend the range of grenades. In Episode One if the player grabs a reprogrammed orange Rollermine and throws it right in the window where a sniper is, the Rollermine will take it out in no time.

Due to snipers being able to destroy objects, the player should never stay behind breakable or volatile covers, such as wooden crates or barrels. 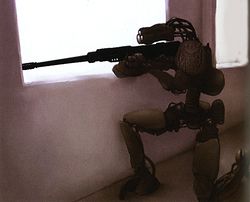 An early piece of concept art for the Combine Sniper presents it as completely robotic, with a set of binoculars for eyes. It is said it was to work in concert with an early version of the Combine Elite,[1] though the specifics are unknown. Also, in the Half-Life 2 leak, the obsolete camouflage Combine Elite model was to be able to use the Sniper Rifle.

As seen in the Half-Life 2 leak, the player was to be able to carry an early version of the Overwatch Sniper's rifle. However, it was replaced by the Resistance-built crossbow.

During the sequence when Alyx Vance uses a sniper rifle in Episode 2, a bug may occur sometimes: if the player manages to detonate any form of explosive in the sniper's nest Alyx is supposedly occupying, the corpse of a Combine Soldier will inexplicably fly out. This is because a Combine sniper's NPC is reprogrammed to consider the player as an ally and represent Alyx using the rifle.

If spawned using console commands, the sniper's model is a normal Combine Soldier which the sighting beam emitting right in front of the soldier's groin. This is because it was never meant to be seen in this context by the player, and the appearance is most likely a placeholder, being immune to small arms fire and can only be killed by explosives. When it is killed it will always be propelled forward by the mechanism they use to fall out of the nests in-game. If this model is blasted with the charged Gravity Gun, it will produce an infinite amount of ragdolls.

If the ammo cartridge for the sniper rifle is spawned using console commands, the texture on the ammo box is pink with the repeating words "OBSO1337" ("leetspeak" for obsolete) wrapped around it. The box cannot be picked up, as the game doesn't recognize it as ammunition.

Upon seeing an incoming grenade a sniper will often shout " Look out!", " Watch it!" or " Shit!", which are reused Civil Protection lines. However, the sound scripts for the Sniper references the names of sound files that indicate that snipers were originally to talk over their radios like Combine Soldiers. The Snipers were to be designated as "Scalpel" and say lines referring to scanning for enemy motion and breaking obstacles. Only one sound file of the unused sound-script voice lines called sn_blockdown.wav still exists alongside the used sniper weapon sounds, however, it is never played in-game.

In the game codes, Snipers have 125 HP; however, this is never shown in normal play, as they are scripted to die from a single hit from any weapon capable of damaging them. For example, Reprogrammed Rollermines in Episode 1 will take two hits to kill a Combine Soldier with 50 HP but will still instantly kill a Sniper in only one hit. Due to snipers being able to destroy objects, the player should never stay behind breakable or volatile covers, such as wooden crates or barrels.

Though the player never gets an opportunity to use the weapon, Alyx Vance occupies a sniper's nest and uses the rifle on two separate occasions: