From Combine OverWiki, the original Half-Life wiki and Portal wiki
(Redirected from Episode One)
Jump to: navigation, search

Half-Life 2: Episode One is the first in what was intended to be a trilogy[1] of episodic games that served as a continuation of the 2004 first-person shooter game Half-Life 2. The opening cinematic of Episode One takes place immediately after the end of Half-Life 2; however, the bulk of the game takes place a few days later[2] in and around the war-torn setting of City 17. Once again, the player assumes the role of Gordon Freeman as he deals with the consequences of his actions in Half-Life 2. Episode One is a stand-alone game that does not require Half-Life 2 to be installed or registered to a user's Steam account to play. It takes advantage of several major upgrades that were made to the Source engine since the release of Half-Life 2, primarily its high dynamic range rendering capabilities and the upgraded facial animation system.

Continuing the plot of Half-Life 2, Episode One consists of five chapters that tell the story of Gordon and Alyx's struggle to escape City 17 before the total destruction of the Citadel.

Episode One's focus is on character development, in particular that of Gordon's female sidekick and friend Alyx Vance, to the extent that she accompanies the player for virtually the entire game:[3] "It's kind of ironic that despite so much of the theme of Half-Life 2 being about other characters and other people, you spent most of the game alone," project lead Robin Walker said in the episode's announcement article in PC Gamer UK.

"Episode One deals with the events and issues set in motion during Half-Life 2. You've done critical damage to the Citadel. The whole place is going to go up, taking out City 17 and what's in its immediate radius. You and Alyx are leading the flight from the city getting up close and personal with some of the creatures and sights from the end of the game."

Despite this comment and much fan speculation, the Combine Crab Synths and Mortar Synths were not present in Episode One; however, Stalkers and previously glimpsed areas of the Citadel are instead encountered and explored by the player.

After some initial confusion, sparked partly with an attempt at humor by PC Gamer UK, which suggested that Alyx was Episode One's playable character, it was confirmed that players would indeed play as Gordon Freeman – unlike the original Half-Life expansion packs, which all dealt with different characters. Part of the reason for this change of direction may lie with the in-house development of Half-Life 2: Episode One: previously, Half-Life expansions were developed by third party Gearbox Software (albeit with scripts produced by Valve).

The game runs on an incrementally upgraded version of Valve's proprietary Source engine, and features both the engine's high dynamic range rendering capabilities, and a new version of its facial animation/expression technology. It also features the commentary node system debuted in the Lost Coast tech demo.

The renaming of Aftermath to Episode One[5] was an indication of Valve's confidence with their episodic structure, an implication confirmed in February[6] and May[7] of 2006, with news of a trilogy of episodes covering the present story arc. While the plots and dialogue of Half-Life and Half-Life 2 were written solely by Valve's in-house writer Marc Laidlaw, the "Half-Life 2 Episodes" were collaboratively written by Laidlaw, Chet Faliszek and Erik Wolpaw with Laidlaw retaining overall leadership of the group.[8]

In addition to the enemies featured in Half-Life 2, Episode One introduces the Zombine — the Zombie form of the Combine Soldier, equipped with a Fragmentation Grenade. Furthermore, Stalkers now serve a gameplay purpose and the player can engage in combat with them.

Behind the scenes and Trivia[edit] 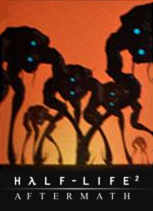 Critical and public response to Episode One was broadly positive, with some reviewers praising the game for having more intricate, well-paced action than the acclaimed Half-Life 2,[10] though a common critique of the game has been its short length;[11] depending on the player's skill (or patience) the game can take less time to complete than the company line of 4–6 hours, which has caused various observers to raise the issue of whether it justifies the price tag.[12]

The game's interactivity, particularly in the shape of the character of Alyx, has also received praise.[13]

PC Gamer magazine gave an 85% in the US edition and 90% in the UK edition to the game. In Australia, the magazine PC Powerplay awarded the game with a rarely seen 10/10. Edge gave the game 8 out of 10, praising the "deftness" with which the game was able to direct the player's eyes, and the strength of Alyx as a companion.[14]

Episode One received the "Best First-Person Shooter" of 2006 award from IGN.[15]

Combine OverWiki has more images related to Half-Life 2: Episode One.