Half-Life: Source is a direct port of the original Half-Life game to Half-Life 2's Source engine, introducing improved water and atmospheric effects, as well as better lighting. Generally, all of the same assets are used. It was included in the collector's edition of Half-Life 2 and is also sold separately on Steam.

Half-Life: Source became available to pre-order on October 7, 2004 as part of the Silver and Gold packages of Half-Life 2[2] and was first released as part of those editions on November 16, 2004 alongside HL2 itself.[1] 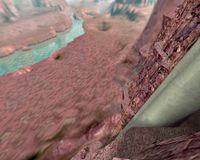 View of the Surface Tension canyon from the cliff in Half-Life. 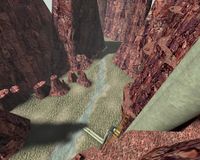 The same spot in Half-Life: Source.

As opposed to an actual remake of the game, it is simply a direct copy of the game's contents. All of the same assets are used, more or less, and most of the differences are due to the fundamental features of the new engine (more detailed lighting and water effects, for example). Some additional optimizations have been made, however, such as increased quality textures, the replacement of drawn bitmap skies with 3D skyboxes, and the addition of new or improved atmospheric effects in some areas. The game's front-end user interface has also been overhauled to resemble that of Half-Life 2, with a chapter selection and dynamic menu backgrounds featuring scenes from the game.

The port was described as a test to see what modders would experience if they attempted to bring their Half-Life mods to the Source.[3]

The game was not received well by fans. Many of them expected a remake, while this was just a simple port. It was shipped with many bugs and glitches.