Half-Life: Decay is an add-on included in the PlayStation 2 port of the first-person shooter game Half-Life, developed by Gearbox Software and published in 2001.

Like Gearbox's other expansion packs Opposing Force and Blue Shift, Decay returns to the setting and timeline of the original story, but with different player characters: two female colleagues of Gordon Freeman, Gina Cross and Colette Green. Dr. Cross is the model for the Hazard Course hologram, and can be seen at a point in Blue Shift. Dr. Green is a new character invented for Decay.

Decay is not available through Valve's Steam service. On September 23, 2008, it was unofficially ported to Windows as a modification for Half-Life by a team of Ukrainian modders.[2] 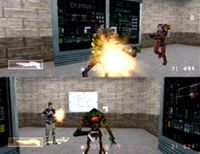 Decay begins with Gina Cross and Colette Green arriving at the Anomalous Materials Labs at Black Mesa Research Facility and reporting to Dr. Keller, who is readying the day's analysis of an unknown specimen. Despite the objections of Dr. Rosenberg to pushing the analysis equipment beyond its design capacities, Cross and Green are assigned to assist in setting up the experiment for Gordon Freeman. When Freeman inserts the specimen into the scanning beam, however, it triggers the Resonance Cascade, causing massive damage to the facility and teleporting alien creatures into the base. Keller and Rosenberg agree that Black Mesa cannot deal with the situation on its own, and so decide to call for military assistance. Cross and Green escort Rosenberg to the surface, where he sends a distress signal to the military. However, the military is ordered not only to contain the situation but to silence the base by killing its employees. Rosenberg elects to stay behind to meet with the military on arrival and Cross and Green return to Keller.

Once reunited with Keller, Cross and Green work to seal the dimensional tear to stop the invasion. The military arrives and tries to remove all personnel as well as the alien force. After resetting key equipment to prevent a second-dimensional rift, the two are tasked with preparing a satellite for launch. The satellite, which is launched by Freeman in Half-Life, is used in tandem with ground-based equipment to significantly weaken the effects of the resonance cascade. Keller tasks Cross and Green with activating this set of prototype equipment, a displacement beacon, which through the satellite may be able to seal the dimensional rift. However, after activating the beacon, both characters are caught up in a "harmonic reflux", a distortion caused by the rift. Despite this, Cross and Green are able to return safely and Keller congratulates them on their success.

The unlockable Vortigaunt mission provides background information explaining how the Xen Crystals used by the rift-sealing machine in Half-Life: Decay are acquired and used by the Nihilanth during the final boss battle in Half-Life. The two player-controlled vortigaunts battle through marines and Black Ops in the underground Black Mesa complex to find the orange crystals in the back of a military van. At this point, the screen fades and the mission is declared a success. 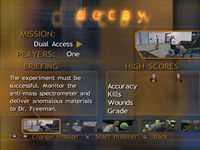 Unlike the other narrative-based Half-Life games, which are single-player only, Decay is designed for co-operative play. While it can be played by one person, swapping between the roles of Dr. Cross and Dr. Green, the game is intended to be played by two players in split-screen. Various puzzles and combat situations throughout the game require the co-operation of the two characters.

The game is also unique in the context of the Half-Life series by being the only game divided into separate missions, instead of a single unbroken narrative. Decay has a ranking system for all of its nine missions, ranging from F (worst) to A (best), based on accuracy, number of enemies killed, and damage taken. If all missions are achieved with an A level, a bonus mission, Xen Attacks, can be played as a pair of Vortigaunts, X-8973 and R-4913. The game was originally to feature twelve campaign missions. However, it shipped with only nine, leaving three to have been cut from the final product.

In addition to the enemies featured in Half-Life, the players encounter a "boss" version of the Alien Craft at the Gamma Labs.

The players can obtain most of the weaponry found in Half-Life excluding the Tau Cannon, the Gluon Gun, and the Crossbow. Also, in Xen Attacks the players get the opportunity to play as a pair of Vortigaunt Slaves, thereby giving them the ability to fire energy bolts and hit other NPCs with their claws.

A cooperative Half-Life game was first alluded to by publisher Sierra Entertainment in November 2000 with the announcement of a PlayStation 2 version of Half-Life. At the time, however, it was unclear how a cooperative version of Half-Life would be implemented; the developers, Gearbox Software, were still experimenting with finding the most balanced amount of players to build a cooperative game around.[3] Decay was originally called "Hazard Team" (map file names still bear the "ht" prefix), and "Operation Decay" was also used at one point, though by E3 2001, the game had acquired its current title, named after the scientific concept of exponential decay for consistency with the scientific names used by previous Half-Life titles. While the E3 convention only provided a demonstration of the main Half-Life PlayStation 2 game, further details were released relating to Decay`s premise and story, as well as confirming that the cooperative mode was to be designed for two players.[3] The game's use of new model sets were also showcased. These new models were updated versions of Gearbox's High Definition Pack pack for Blue Shift, featuring higher numbers of polygons and animation features such as facial expressions.[4] The enhanced models were around twice as detailed as those in the High Definition Pack, which itself was of a much higher quality than the original models in Half-Life.[5] Media updates through the months following E3 showed various screenshots and the trailer to the game.[4][6] On August 18, 2001, Sierra announced that Decay was nearly complete, and would be submitted to PlayStation 2 manufacturer Sony for verification within days.[7] The entire Half-Life for PlayStation 2 package achieved gold status on October 30, 2001,[8] and the game was released on November 14, 2001.[9]

Although Gearbox completed a PC port of the game, Decay was never released "due to powers beyond [Gearbox's] control,"[10] in October 2005, work was begun by a group of developers to port Decay over to Windows, as a modification for Half-Life. The port relied on the discovery of a method that allowed Decay`s PS2 game files to be deciphered, thereby allowing the files to be ported to Windows.[11] The port went into the beta development stage on March 22, 2008 and was released complete on September 23, 2008.[2] The port was received well by journalists in the industry; British journalist Alec Meer stated that it was "fantastic to have this short but sweet lost Half-Life episode on PC at last, and it even has something the PS2 version didn't — online play".[12]

Decay received a weak but overall positive reception from the video games industry's critics. Writing for GameSpot, Doug Radcliffe argued that Decay was "impressive", praising the design of puzzles required players to work together, as well as how the ranking system discouraged players from competing against each other.[13] GameSpy reviewer David Hodgson was more reserved in his views of the game; although describing it as "great fun", he noted that it could become "tedious, with one member waiting for minutes at a time, while the other scratches their head, then completes an objective". In addition, Hodgson felt that the more puzzle-orientated nature of Decay left the action elements "a little muted compared to Gordon's single player quest".[14] The site Allgame described Decay as an "added bonus" for the PlayStation 2 version of Half-Life, but noted that as the game was designed for two players, it significantly suffered when a single player attempts to play it by switching between two characters,[15] a point that both GameSpy and GameSpot agreed on.[13][14] In his review for IGN, critic Doug Perry felt that Decay was "neat in its own limited way", but that it was more of a distraction from the main game, "a complementary cup of vegetable soup than a piping hot main dish of New York steak".[16] While The Electric Playground reviewer Steve Smith stated that the control scheme for the PlayStation 2 version of Half-Life "is about the best we have seen on the PS2 or any console", he concluded that although Decay was a "nice add-on", it was "no reason to buy this port".[17]