Sierra Entertainment was an American publisher founded in 1979 as On-Line Systems by Ken and Roberta Williams. Based in Oakhurst, California and later in Fresno, California, the company was owned by Activision, a subsidiary of Activision Blizzard.

Sierra handled the retail publication of several Valve games under its proper name and later under its holding name, Vivendi Games, until Electronic Arts took over.

Following the release of Half-Life, Sierra offered a "Congratulations for Raising the Bar on Action Games" award to Valve in the form of a golden crowbar. It is showcased in the lobby at Valve's headquarters, also featuring the replica of the Half-Life 2 crowbar. 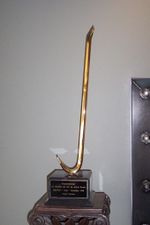