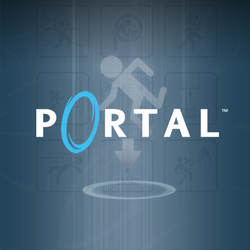 Most of Portal's soundtrack is non-lyrical ambient music composed by Kelly Bailey and Mike Morasky, somewhat dark and mysterious to match the mood of the environments. It was released in part on The Orange Box Original Soundtrack, which includes both GLaDOS's in-game rendition and Jonathan Coulton's vocal mix of the closing credits song, "Still Alive".

"Still Alive" was written by Jonathan Coulton and sung by Ellen McLain as the GLaDOS character. A brief instrumental version of Still Alive is played in an uptempo Latin style over radios in-game. Erik Wolpaw noted that Coulton was invited to Valve a year before the release of Portal, before it was clear where Coulton would contribute. Wolpaw stated: "Once Kim [Swift] and I met with him, it quickly became apparent that he had the perfect sensibility to write a song for GLaDOS."[1][2] The use of the song over the closing credits was based on a similar concept from the game God Hand, one of Wolpaw's favorite titles.[3] The song was released as a free downloadable song for the music video game Rock Band on April 1, 2008.[4][5][6]

Using an appropriate program, it is possible to extract all audio tracks heard in-game from the portal_pak_dir.vpk archive file. Portal's soundtrack was also included in the game directory of both the full and demo Audiosurf releases on Steam as part of Audiosurf's The Orange Box Soundtrack. Additionally, on October 30, 2012, it was released as the fourth volume in a four-disc retail release, Portal 2: Songs To Test By (Collector's Edition), featuring music from both games.[7] On September 25, 2014, the soundtrack was made available as free DLC to all owners of the game on Steam.