"GLaDOS' Song"[2] is the title of a song cut from Portal 2, written and performed by Ellen McLain. Offered by John Patrick Lowrie and his wife to Valve for use as an Easter egg, it was eventually never utilized.

The song hadn't been known to wider public until Jagger Gravning from Motherboard asked during the making of his "GLaDOS and The Sniper: A Voice Acting Love Story" article whether the couple would ever release the track. After finding time at a local recording studio, "GLaDOS Song" was brought out afresh.

McLain said she wrote most of the song in her head while she was in the bathtub, and then worked out the details while taking a long walk. John arranged the guitar accompaniment, and they initially recorded it in their living room. Interestingly, "GLaDOS' Song" is the only musical piece Ellen McLain has ever written. 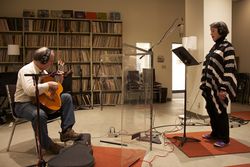 You were in my dreams,
While I slept forever.
I've been drifting here
So long.

When I found you near,
I hoped you would wake me.
You won't say goodbye.
Never say goodbye.

Now that I'm awake,
I hope you will find me.
If you want a cake,
I'll bake.
Did you bring the eggs?
I'll mix in the sugar for you.
Don't say goodbye.
Sweet, don't say goodbye.