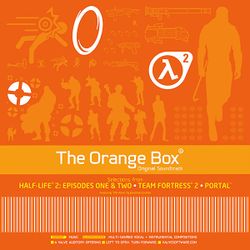 The Orange Box soundtrack is a compilation of tracks selected from the soundtracks of the games included in The Orange Box, such as Half-Life 2: Episode One, Half-Life 2: Episode Two, Portal, and Team Fortress 2, the first two by Kelly Bailey, the third one by Mike Morasky, Kelly Bailey and Jonathan Coulton and the last one by Mike Morasky. It also includes the acoustic version of "Still Alive".

The compilation was released on December 21, 2007 as The Orange Box Original Soundtrack and was originally available at the official Valve Store. It can still be found on various web stores such as Amazon and digital music service websites such as iTunes.