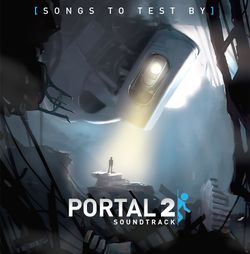 Cover art for Portal 2 Soundtrack: Songs to Test By, as given with downloadable soundtrack, featuring concept art of Chell facing GLaDOS, with the bird flying on the right of GLaDOS' head.

The Portal 2 soundtrack was composed by Mike Morasky (credited in the soundtracks as "Aperture Science Psychoacoustic Laboratories")[1], with the exception of the songs "Want You Gone" composed by Jonathan Coulton, "Offering," composed by Larry Stephens, an arrangement of Little Prelude in C minor, BWV 934 by Johann Sebastian Bach, and "Exile Vilify," composed by The National.

The soundtrack is marketed as "aural stimulus" released for free on MP3 over the course of mid-2011, alongside ringtone versions for the Android and the iPhone.

A Collector's Edition of the soundtrack has been released in October 30, 2012 which includes a fourth volume containing Portal 1 soundtrack.[2]

While the music can be found in the game files, most tracks are unmixed stems and can only be fully experienced in-game, as most of the time the testing elements provide additional musical tones. Mixing in-game is usually sequential or layered samples, the latter being mostly looped. The soundtrack is largely electronic and differs from the quiet ambient music used in the Portal soundtrack in that it is often upbeat.

On September 24, 2014, the soundtrack was made available on Steam as a free DLC to all owners of the game, under the name Portal 2: Songs to Test By.

Filename paths when unspecified are assumed to be /sound/music or /media for videos.

On May 25, 2011 on the official Portal 2 blog, the first volume out of three of the complete soundtrack titled Portal 2 Soundtrack: Songs to Test By was released featuring the fully mixed tracks. Below are sections outlining the tracks from this volume.

On July 1, 2011 on the official Portal 2 blog, the second volume out of three of the complete soundtrack titled Portal 2 Soundtrack: Songs to Test By and featuring the fully mixed tracks was released for free. This one includes exclusive ringtones of some of the in-game sound effects.

On October 1, 2011 on the official Portal 2 blog, the third volume out of three of the complete soundtrack titled Portal 2 Soundtrack: Songs to Test By and featuring the fully mixed tracks was released for free, with a link to download the entire soundtrack.

The following tracks haven't made the final cut due to their original artists' copyrights.

Plays on an Aperture Science Radio. This song is composed by The National, and is the only pop rock song in the game besides "Want You Gone".

Location played: The Rattmann Den near Test Chamber 03 in Chapter 2.

A smooth jazz played to tranquil testers in the face of almost certain death. This song is composed by Larry Stephens and is from his album also titled "Offering".[3]

Location played: The original Test Chamber 04 from Portal as seen in Chapter 1. Only a small segment is played before the speakers glitch and shut down.