The Turret Opera is an opera made of Aperture Science Sentry Turrets featured at the end of Portal 2, where they sing the song "Cara Mia Addio," a cinematic, operatic song.

"Cara Mia Addio" is an Italian aria, but it is not accompanied by official lyrics. Fans of Portal 2 with an understanding of Italian have both transcribed them in their original tongue and translated them into English. The song was composed by Valve composer Mike Morasky, but the librettist is unknown.[1] Ellen McLain is the vocalist for the song,[2] as she also voiced GLaDOS and the turrets. In an interview, McLain claimed that she "made up the words out of [her] bad Italian [...] on the spot".[3]

The Turret opera when the Animal King starts.

The opera can be seen/heard after Chell awakens in GLaDOS' main control room and is subsequently expelled from the facility via an elevator. The game then cuts to an ending cinematic where Chell first encounters a group of four sentry turrets who, after aiming their lasers at Chell, begin to play the music of the opera as if they were accordions.

After seeing these turrets, the elevator continues its upward path and eventually ends up in a large amphitheater-like room full of turrets. The singer appears to be a turret that is wider/larger than the other, more typical turrets and also has a spotlight on it. The thicker size of the apparent turret could be a play on the American stereotype that Grand Opera sopranos are typically overweight and related colloquialism that "it ain't over 'til the fat lady sings."[4] The official Portal 2 guide gives further credence to such conjecture, as it refers to the "fat" turret as the "Soprano Turret.".[5]

Also of note is an enormous, crowned animal king sentry turret in what seems to be jaguar-print camouflage, which can be seen in the back of the amphitheater during the opera. It appears to be playing the deeper bass tones of the opera.

Through the song, the turrets say goodbye to Chell, showing some affection for her and advising her to continue her life away from GLaDOS and science.

The lyrics were partially improvised.

"The composer, Mike Morasky was the driving force behind the Turret Opera. He wrote all the music. He requested that I use my legit voice (operatic sound) on some of the takes. He chose the takes to use. He asked me to make up some words. So I did so in my bad Italian."
― Ellen McLain[6] 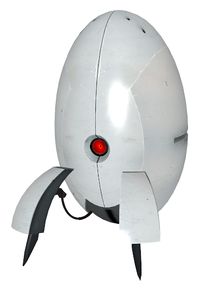 A render of the Turret Wife.

The Soprano Turret, also known as the "Turret Wife" in the game files and song title by it, or the Fat Lady, is first seen in Test Chamber 11, going up in a lift right before Chell enters her own lift. It is next seen in Test Chamber 16, where the Turret Quartet plays the song "Turret Wife Serenade," as titled by volume 1 of the Portal 2 soundtrack. She is last seen in the Single Player campaign Turret Opera. She is also witnessed in the ending credits of the Cooperative Campaign.

In the first test where Turrets can be destroyed with Thermal Discouragement Beams (Test Chamber 16), there is a Turret behind a metal grating. If this Turret is destroyed, the grating will come off, and one can then enter the vent and discover four singing Turrets below, each in a separate compartment and with the Soprano Turret, idle, opposite them. The vent also features scribblings done by Doug Rattmann.

The Quartet is seen again during the opera song at the very end of the game, which they open at the first elevator stop, before being picked up by the Turret group in the amphitheater.

The Animal King turret appears at the back of the Turret Opera's primary room, serving as the source of bass tones.

The initial Turret Quartet which begins the opera.