Fetchbot is a black and white dog-like Item Retrieval Core appearing in The Lab. It is used by Test Travelers for object retrieval training. 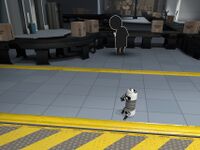 Fetchbot sitting next to the conveyor belts in the hub.

The robot is first introduced in the first Lab experiment, Postcards. In all four postcard locations, object retrieval training can be practiced with the dog by throwing it sticks. Fetchbot subsequently appears in the hub where object retrieval can continue and where it can be further interacted with.

Fetchbot is made of two rounded white elements connected together with an extensible gray rubber bellow and four piston-like paws. Its head consists of a big black eye protected by a transparent dome, that reacts to the surroundings and has eyelids for expression. It also has an antenna-like tail that can wiggle along with its rear when excited.

Unlike most Aperture robots that have gendered personalities, Fetchbot is neither male nor female.[2]

Fetchbot was designed to behave like an actual dog and thus has a personality and behavior very close to that of an actual dog. In Postcards, it will always fetch any stick thrown by the player. Back in the hub, it will do the same with any item, even when it was thrown in an out-of-reach location. Each time the Test Traveler picks up an object, Fetchbot will always be ready for them to throw it. It will also chase Xortex 26XX's drone or the balloons made with the Ballooninator. It can also be shot with the arrows brought back from Longbow, after which it will contract itself into a pill-like shape, allowing to be picked up. However it will ignore Bendies, and they will ignore them in return, much like the ignore the Test Traveler.

The dog will lie on its back for belly rubs whenever the player ducks nearby, and will exhibit dog behavior such as chasing its own tail, stretching its body, sitting, yapping, frolicking around, or growling at random.

Fetchbot has no mouth so it uses a zero-point energy field manipulator to pick up objects,[1] a technology also found in the Gravity and Portal Guns, as well as JoeJeffs in Moondust's Rock Crushing section.

Player interacting with Fetchbot at Snæfellsjökull. 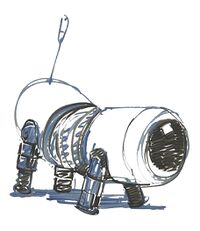 Fetchbot doodle from the hub's whiteboard.

Fetchbot was first used in the Slingshot experiment as a special ammo type for the slingshot that was to come on the conveyor belt from behind the player, among other random objects, objects that were added on the belt because the team thought it was underused and would make a fuller and livelier 360° experience for an experiment that is essentially a 180° one. Upon being picked up it would turn into a pill, a feature kept in the final game when shooting the dog with an arrow. Ultimately, the dog being used as ammo didn't work.

Meanwhile, animators Mike Belzer and Paul Thuriot were doing a lot of tests for animation purposes to see what could work in VR and what could be fun to peruse or interact with. When Belzer remembered the existence of the now unused Fetchbot, he asked Tristan Reidford to use it for testing, after which Thuriot rigged the model. Mike Stevens and Belzer then started to play with the notion of playing fetch with the dog. While Stevens's contribution was short-lived, it was enough to help hook up elements that allowed the developers to play fetch with the dog in VR. Initial playtesting was successful, as the players had fun with the dog and found it rather cute.

Subsequently, Belzer and Thuriot continued on to expand the library of what they could do with that dog. They started to explore what it could do with not only fetching, but behavior elements as well. Playtesters wanted to interact with him more than just tossing a stick, so Thuriot implemented interactions such as the dog getting ready to be pet if the controller gets close. More interactions and reactions were then implemented (subtle or explicit), such as looking at the player and being generally aware of its presence, as well as a large library of different sounds (barking, cooing, growling, panting, scratching, shacking, sleeping, spinning, yelping, etc.), turning the dog into a very interactive character.

At the time of the game's development, Belzer had a Golden Retriever named "Buddy", and he would look at his motions and mimic some of his movements with Fetchbot. Specifically when the dog is laying down and the player pets it, his leg kicking about is exactly what Buddy did and Belzer thought that was a fun element to implement. The more playtesters played with the dog, the more they wanted.

Among the playtesters was Thuriot's son who was so young he didn't even know what a video game was. Upon being given a controller, he would instantly know how to act around the dog and pick up a nearby ball and throw it to the dog, and also expect the dog to do "dog" things. The more playtesters interacted with the dog, the more they wanted it to behave like an actual dog, prompting the team to add more detail and complexity in its behiavior.

Fetchbot's item retrieval abilities were also designed to solve the problem of players accidentally throwing items outside their play space, as it can travel up to that area. When the first playtester grabbed his Face-Mounted Portal Sphere, he threw it away because tossing stuff around was one of the first things players wanted to do when, well within the game's development, they finally got controllers, but were unable to get it back when it went beyond the play space. While the ability to throw Portal Spheres was removed, Fetchbot can still bring back any item that was thrown outside the play space.

After repurposing Fetchbot to its final iteration, it was initially to appear just in the hub and not in the Postcards experiment. However playtesters had a tendency to get attached to the dog and were then surprised and disappointed that the dog would stay behind and not follow them in the postcards, so the team decided it would be a great addition to the postcards. It was very well received by playtesters, because added to visiting a pleasant environment, the dog feels very real and enhances the experience by being a companion to interact with, and enhances the player's feeling of being part of the game's world, the postcards being initially static environments where there is nothing specific to do, and the dog also allows to connect the postcards and the hub together. For the team, it was an important stepping stone towards understanding how to conceive VR characters and what the minimum bar for a character would be.[4][5]

The Polaroid of Dog featured at the start of Half-Life: Alyx features the model of an early iteration of Dog that has the same legs as Fetchbot. Additionally, a sketch pad in Alyx shows several upgrade ideas for Dog with one sketch depicting it with body similar to that of Fetchbot.