"Have you been able to get the beverage machine to work yet?"
― Black Mesa scientist[src] 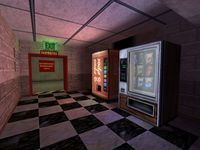 Vending machines are one of the special objects the player can interact with in Half-Life and its expansions. They come in two main forms: beverage machines and snack machines. Beverage machines dispense a single soda can each time a button on its panel is pressed, although some personnel in the facility are seen struggling to receive their item. Each can gives the player one health point, serving as a makeshift Medkit when none are available. Beverage machines have a limited capacity, the default amount being ten cans, and will eventually deplete if used enough times. Destroying a beverage machine may cause its contents to eject onto the floor. While the generic snack machines in Half-Life cannot be used by the player, the "Carousel Snacks" machine introduced in Half-Life: Opposing Force can be activated to yield a chocolate bar. This bar does not provide any health.

When a soda can is dispensed, one of six different brands is randomly chosen. These soda brands are, in the model's internal texture order: "Hai!", "Glub", "Grope", "Guthrie" (a nod to John Guthrie), "Yuck", and "Dante" (a nod to Dante's Hell in the Divine Comedy). The soda cans were remade for the unreleased Dreamcast version of Half-Life with a higher polygon count and greater texture resolution. These revamped brands include "Captivation" (the logo of Captivation Digital Laboratories), a green can with no brand, "Grape Ape", an illustration of Cthulhu's head (with no brand), a frog peaking out at the viewer (with no brand), and "Dante" again. The Playstation 2 version only uses the default "Hai!" soda can without any alternate brands.

Beverage machines returned in Half-Life 2 in the form of Dr. Breen's Private Reserve. While still producing cans upon use, these items do not provide health. 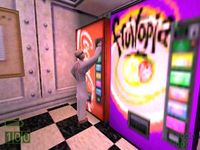 Scientist using a Coca-Cola beverage machine in an early screenshot.

During Half-Life's development, real world brands were used on the beverage machines including Coca-Cola, Fruitopia, and Minute Maid. The original dispensed soda can brands can be found in Worldcraft's files. These include: Coca-Cola, Sprite, Diet Coke, Orange (Minute Maid), Surge, and Moxie.[2][3] However, the Sprite soda can was still included in the game as one of the garbagegibs models, having a chance to appear whenever a trash can is destroyed.[4]

While they were still using these real world brands on the vending machines, Valve reached out to Coca-Cola asking for permission to use them in the final game. The company was close to agreeing with the proposition, but while these talks were taking place, a level designer at Valve introduced a new form of interaction with vending machines by making them breakable, dispensing numerous cans of soda as a result. When Coca-Cola learned of this, they then decided to decline as they didn't wish to encourage vandalism and have people think they could obtain free soda by destroying their machines. In light of this, Valve repainted the vending machine textures with generic brands.[5]

The brand of chocolate that can be found in Opposing Force is named Captain Koso's Pure Highspeed Candy Bar. While presumably an in-joke, the meaning behind the term "Koso" is not known. There is a player configuration file named koso.cfg in the game files left by a developer that went by the alias "Diggem", most likely a model designer judging by its contents. There is also an unused line again referring to "Koso" spoken by the scientists in Half-Life: Decay: "Do you know what the word Koso is referring to, exactly?".

There are two unused animations for the security guard pertaining to vending machines. These two sequences, pepsipush and pepsiswing, depict the guard toppling a machine, possibly to block a pathway or crush something.[4] An early video demonstration for Half-Life, offices.mpg, featured a sequence in which a Zombie attempts in vain to obtain an item from a snack machine. This scripted event was cut in the final game, while the associated animation was used elsewhere for an unrelated purpose.

In Half-Life: Day One, the OEM demo version of the game, soda cans don't heal the player when collected.