"Unbelievable! You, Subject Name Here, must be the pride of Subject Hometown Here."
― GLaDOS[src]

A Test Subject is a human, animal or robotic individual used by Aperture Science in their computer-aided Enrichment Center.[3] A Test Subject traveling to Pocket Universes is referred to as Test Traveler.[4]

The generic stick figure Bendy[5] is often used to represent Test Subjects, although it can also represent any type of Aperture employee, or real-world players. 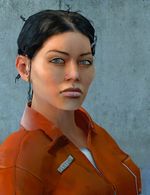 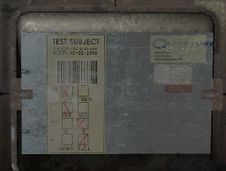 The panel on the back of a Relaxation Center room that labels the test subject.

As of the events of Portal 2, both Wheatley and GLaDOS imply that Chell is the last surviving Test Subject of the 10,000 residents that were stored there before the Enrichment Center was locked down. Shortly before GLaDOS's murder at the hands of Chell, a robotic replacement program was being developed to render Chell and any human-based Test Subjects as unnecessary and irrelevant. However, during the co-op campaign, ATLAS and P-body discover a room full of humans in suspended animation, apparently giving the facility even more subjects to test. Later, in the Art Therapy co-op course, GLaDOS admits that all the humans had died during her failed attempts at turning them into "killing machines".