The Lab is a compilation of 8 virtual reality experiments / minigames developed by Valve to test, validate and promote their virtual reality technology. It was announced on March 7, 2016[1] and released on April 5, 2016 on Steam for free.

The game was previewed at the 2016 Game Developers Conference, where a demo featured four of the eight minigames (Slingshot, Longbow, Xortex 26XX, and Postcards) was showcased. The concept for the minigames in The Lab were based around ideas on how to transfer other genres and game types into the VR world in an innovative way.[2]

Bendies and the first Aperture Science Face-Mounted Portal Sphere at the game's start.

The Lab, set in Pocket Universe Lab 08 from which the game takes its name, and one of the many Aperture Science pocket universes, begins in the Aperture Science Sub-Universe Exploration Center, a hub that serves as an "entirely theoretical bridge" to connect to "several contemporaneous parallel universes". The female Lab Announcer, in her first appearance, guides (and warns if needed) the player and reports on things occurring in the lab. She reports things occurring in other labs as well, and also informs and warns other Test Travelers in these labs.

Each universe can be accessed by "test-transitting" through a themed testing element station, or "relic", with its associated Aperture Science Face-Mounted Portal Sphere that the player must place near their head to teleport to the related universe. Moving around within universes is used with a Spatial Reassignment Wand, the in-universe equivalent of the VR controllers. Visiting a universe consists of a scientific experiment that works as a minigame for the player, a human "Test Traveler", the term used for Test Subjects journeying through pocket universes. Each relic has a clipboard (also known as Aperture Science Information Display Board) that gives a short summary of the experiment, its in-universe scientific name (referencing an actual scientist), and various comments. These experiments have been carried out since at least 1989.[3]

Completing an experiment leads back to the hub in which the player can interact with items gathered from each game after completion, and placed on a large table at the center of the hub, save for Fetchbot who roams freely. The area also includes a whiteboard on which the game progression is displayed, with various colored dry erase Marka markers and an Ez-Raze eraser that the player can use (later featured in Half-Life: Alyx). Various marker doodles also appear at random next to the experiments list each time the player returns to the hub. The area is stated to not be exited until a Decontamination Associate has cleared the Test Traveler of quarantine from possible diseases, incubating egg clusters or malicious super-parasites they may have become host to during their test-transits.

Bendies are also present in the adjacent triage / storage areas filled with boxes and crates - one with tape drives and one with conveyor belts. Some Bendies are working, some are not, and a few others appear behind the locked door near the Postcards relic. Bendies can be shot at with the bow retrieved from Longbow, prompting various reactions from the Announcer. The conveyor belt moves "recycled props" boxes that sometimes reveal targets or release balloons that can be shot at with the bow. A Bendy will occasionally trip and drop a box containing black balls of an unknown nature. They can be retrieved with the drone from the Xortex 26XX experiment, but not used. Near the conveyors are two elevators, and next to them are two signs related to Test Shaft 09 appearing in Portal 2: one indicating "To Enrichment Sphere Juliet Planck", found in the game files only, and one indicating a measure of 3375 meters, originally featured in the shaft through which Chell and PotatOS landed in Test Shaft 09 in the game. A Bendy driving a forklift recklessly regularly passes between the player and conveyor belts area. The conveyors area is separated from the gameplay area by yellow stripes as well as the words "CAUTION KEEP CLEAR" on the player side and "TOO MANY LOTS OF CRATES EVERYWHERE" on the other side.

Several dev kit boxes for the Knuckles EV3, Valve Index's controllers, can be found in the hub, placed there as an Easter egg. One is on a beam above the hub that can be retrieved with the bow or the drone, and three are stacked behind the locked door near the Postcards relic. That area can be accessed and these boxes can be picked up by creating a large VR play area, which prompts various warnings from Announcer.

The game's sound files contain Lab Announcer lines reacting to the player throwing around Face-Mounted Portal Sphere, clipboards and paperclips. In-game however, the spheres cannot be dismounted, throwing the clipboards doesn't prompt any reaction, and paperclips are not present.

Lab Practicum from the Half-Life 2 soundtrack is used for the loading screens.

Following the game's initial release, it underwent two major updates: the Appliance of Science update on June 6, 2016, which added global leaderboards for the minigames Longbow, Xortex 26XX, and Slingshot, among others,[4] and the Hands-On update on August 29, 2019, which added viewmodel hands and overhauled the physics-based interaction, among others.[5]

Player interacting with Fetchbot in Postcards.

Player firing the slingshot in Slingshot.

Player firing the bow in Longbow.

Roshan appearing to a player at the end of Secret Shop.

Partial view of the solar system, with Saturn and Jupiter. 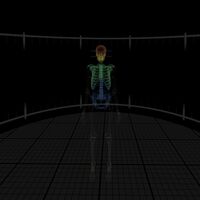 Full view of the skeleton in Human Body Scan.

Consists of visiting real-world locations made using photogrammetry, and playing fetch with Fetchbot.

Consists of destroying all of the storage units of an Aperture Storage Annex by throwing Personality Cores with a slingshot.

Consists of defending a castle with a bow against waves of a horde of Bendies.

Consists of a shoot 'em up / bullet hell video game.

Consists of exploring the Secret Shop from Dota 2.

Consists of repairing a damaged ATLAS robot, a test to get a job into Aperture Science's Human Diversity Outreach Program.

Consists of interacting with the planets in the solar system.

Consists of observing a detailed human body model made from a series of CAT scans.

This cut minigame would have consisted of a simple arcade-style shot-em-up set in a theme park-like simulation of City 17.

Other experiments not performed by the game's protagonist are mentioned by the Lab Announcer (by their in-universe scientific name) in her various messages and warnings.

Named after physicist Enrico Fermi. Connected to Pocket Universe Lab 28, the Announcer warns of a negative mass leak occurring there and advises evacuation of the lab until mass density returns to zero or higher.

Named after physicist Ludwig Flamm. Connected to Pocket Universe Lab 03, the Announcer warns that the experiment leads to the magma-filled lower intestinal tract of a planet-eating radioactive whale and asks Test Travelers to immediately discontinue transit.

Named after astronomer, mathematician, and astrologer Johannes Kepler. Tthe Announcer states that Test Travelers containing organs that would be considered 'vital' to their survival should avoid test-transit to that experiment until further notice.

Named after physicist Albert A. Michelson. The Announcer states that the experiment leads to a binary star system and that both stars are currently exploding in Type One and Type Four supernovae, respectively, and that protective eyewear is recommended for all test-transit to the experiment.

Named after mathematician Richard Swan. The Announcer warns that data suggests the experiment leads to a gravitational singularity, and that Test Travelers with non-theoretical mass are discouraged from entering the experiment.