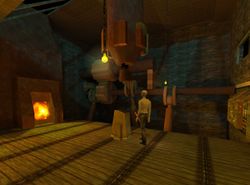 GoldSrc, or Goldsource, is the retronym used internally by Valve Software to refer to the heavily modified Quake engine that powers Half-Life, its expansions and related games of the same era. 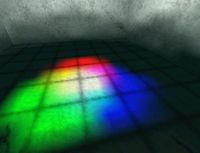 GoldSrc is a heavily modified version of the QuakeWorld engine codebase, which in turn is a development of the Quake engine's codebase.[1] Some minor fixes from the Quake II engine were incorporated as it was developed over time.[2]

Originally, GoldSrc's netcode, the coding that handles online multiplayer, was similar to the one in the QuakeWorld engine. However, in 2001, Valve implemented a new netcode that was designed to make it easier for players with high ping to play well via "lag compensation".[3]

During the early development of Half-Life 2, an experimental engine known now as Source was made, debuting with Counter-Strike: Source and Half-Life 2 in 2004.

While officially abandoned in favor of the Source engine (except for minor maintenance updates), the GoldSrc engine is still used by third party developers.

Similarities with the Quake Engine[edit]

"When we were getting very close to releasing Half-Life (less than a week or so), we found there were already some projects that we needed to start working on, but we couldn't risk checking in code to the shipping version of the game. At that point we forked off the code in VSS to be both $/Goldsrc and /$Src. Over the next few years, we used these terms internally as "Goldsource" and "Source". At least initially, the Goldsrc branch of code referred to the codebase that was currently released, and Src referred to the next set of more risky technology that we were working on. When it came down to show Half-Life 2 for the first time at E3, it was part of our internal communication to refer to the "Source" engine vs. the "Goldsource" engine, and the name stuck."