Black Mesa (previously known as Black Mesa: Source) is a third-party total remake of the original Half-Life. Its first part, including the Half-Life storyline up to the chapter Lambda Core, was released as a mod on September 14, 2012,[1] while an improved Steam version of the game was released on May 5, 2015. The remaining Xen chapters omitted from the initial release were released on December 24th, 2019, and the Steam release left early access March 5th, 2020.[2] On November 25th, 2020, the final “Definitive Edition” update was released, adding further improvements to the game.

As in Half-Life, players assume the role of the protagonist, Dr. Gordon Freeman, a recent MIT graduate in theoretical physics, and also a recent employee at the titular Black Mesa Research Facility. After an experiment that goes horribly awry when an unexpected Resonance Cascade (an apparently completely fictitious occurrence) rips dimensional seams that devastate the facility, Gordon must fight to escape the now alien-infested facility as creatures from another world — known as Xen — subsequently enter through these dimensional seams.

The ultimate goal of the game is to recreate the original Half-Life from the ground up, using the advanced capabilities of the Source engine to create a new and more engrossing in-game world with more varied, complex environments and more challenging, realistic gameplay. Black Mesa features original textures, models, sounds, voice acting, and music (composed and produced by the game's sound designer, Joel Nielsen; fully available here) designed specifically for the game. However, the developers intended to preserve all of the gameplay elements from the original game, without adding entirely new enemies, weapons, or levels. The exception being the Xen chapters, which now consist mostly of original work, with cues taken from the original Half-Life. [3] 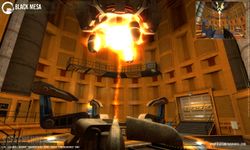 Development screenshot of the Anti-Mass Spectrometer.

Black Mesa was born of the discontent fans experienced when playing Half-Life: Source; when considering the living environment Valve created with Half-Life 2 using the Source engine, the original game fell far short of what many players thought could be done with the software, basically being a straight port, except for improved water and lighting effects along with the inclusion of ragdoll physics. Black Mesa was born out of two separate mod teams: "LeakFree", formed in September 2004, and "Half-Life: Source Overhaul Project", formed in October 2004 and led by Jimmy Headdon. Neither team knew of the other’s existence until Leakfree’s lead Jon Dominski began publicising in the Half-Life2.net, now ValveTime.net forums. After discussions between the two project leads, the two development teams merged, resulting in a team of 13 members by the end of December 2005. According to the developers, "Black Mesa: Source was built and founded on the principle that Half-Life: Source did not do the original title enough credit... [Black Mesa] set out to reconstruct the original title, giving it new environments, models, and abilities.". Development was officially announced on January 1, 2005.

The release date for the project was originally set for 2009, but was delayed,[4] gaining the mod the status of vaporware,[5] until its final release date was announced on September 2, 2012, when the soundtrack was made available for download.[6] Black Mesa was eventually released in September 2012, causing the official website to crash.[7] The mod was available at no charge, and requires the free Source SDK Base 2007 to work as it uses Half-Life 2 models with custom textures, such as the crowbar, the Colt Python, the Headcrab, the Barnacle or the crow.[8] At some point, a remake of Half-Life: Uplink was planned, but it was eventually made by another person.

Most likely due to the amount of publicity given to an unofficial third-party mod, Valve Corporation privately asked the producers of the mod to remove the "Source" part from the title to avoid confusion on whether it is an official Valve product or not.[source?]

On November 19, 2013, the fifteenth anniversary of Half-Life's release, the developers announced that the complete version of the mod would be made available for purchase on Steam. There will also be a free version with minor differences from the paid version. The mod is also going to be on a "new engine" related to Source, but no more information had been released on this subject due to the contract with Valve. [source?]

On August 18, 2014, a Black Mesa Content Pack DLC for the Source FilmMaker was released.

On December 24th, 2019, the long awaited Xen chapters were released.

On March 5, 2020, Black Mesa 1.0 was released, and the game was announced as no longer being in early access.

On November 25, 2020, the final “Definitive Edition” update, which brought numerous improvements to the audio, visual and gameplay aspects of the game, was released.

Although the cooperation mode was said to be included in the mod, on March the 17th 2010, it was announced that due to the great amount of problems to port and make co-op code working, the developers decided to stop its development and focus only on single-player and deathmatch.[9] It has been stated that since dropping the co-op mode, Black Mesa's chapters have been redesigned with only single-player activity in mind, and that the new "level design and gameplay don't lend themselves well to a co-op experience."[10]

During its development, Black Mesa has received attention from several video game publications. It has been featured in articles from Computer Gaming World, PC PowerPlay, and PC Gamer UK magazines. Valve published a news update about the modification on Steam platform in 2007 saying that "We're as eager to play [Black Mesa] here as everyone else."[13]

After receiving a development version of Black Mesa in December 2009, PC PowerPlay magazine said that the game's setting "looks, sounds, [and] plays better than ever before". The "subtle" changes from the original Half-Life were said to have a "substantial" overall impact. They also noted the project's "frustrating" then-five-year development time, and current lack of release date, but added that the developers were making progress.[14]

After the mod was released, early impressions of the game were very positive,[15] receiving a score of 86/100 on Metacritic, based on nine reviews.[16] The game was praised for its high polish, with many critics comparing its quality to that of an official Valve title.[17][18] Destructoid praised the game for the improvements it made over the original Half-Life, saying it was "something that felt very familiar, [but also] very fresh."[19]

Both versions of Black Mesa featured 25 Achievements. The 1.0 version on Steam added an additional 25 for a total of 50 achievements.

The Black Mesa and Black Mesa: Xen soundtracks were composed by Joel Nielsen.[31]

The team contacted Mike Shapiro, the original voice actor behind Barney Calhoun and the G-Man. While he showed interest and support in the mod, he politely declined indicating he was not available to devote time to contributing to the mod.

The official website and its respective wiki served as the main source for most official images throughout the mod's development, though most have since been deleted from the site following a redesign after the game was released on Steam. All personal websites of the respective team members also provide further, exclusive images. This gallery consists of only a sample of all pre-release media released by the developers since development on Black Mesa began in 2005.