"Did you see that thing, with the... the missing leg?"
― Black Mesa security guard[src]

The Houndeye is a tripedal creature that teleported to Earth from Xen after the Resonance Cascade. It is introduced in Half-Life’s third chapter, Unforeseen Consequences. 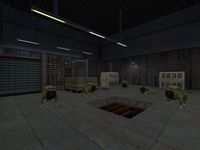 Houndeyes in captivity in the Advanced Biological Research Lab.

Possessing only three legs and a thorax, the Houndeye is a faint yellow-green in color, with electric blue tiger-like stripes adorning its spine. In place of a head there is a large, black, insect-like compound eye protected by eyelids. Houndeyes apparently communicate through a series of high-pitched sounds somewhat similar to the barking of dogs, on which its behavior and movement are also partially based, hence its name (its sounds are actually based on that of dogs).[2] Like most of the creatures found on Xen, Houndeyes are studied in Black Mesa's Biodome Complex.

The Houndeye is an excellent example of a social animal in terms of pack hunting. Like many other enemies in Half-Life, Houndeyes move in squads up to a maximum of four members. While a shy and timid creature by itself, groups display resonant behavior, emitting destructive harmonic sonic attacks in shock waves, capable of injuring those they attack or destroying nearby objects such as wooden crates or windows. Their eyelids are seen moving only when they are excited. Although they are not seen displaying this trait often, Houndeyes appear to be carnivorous creatures, as one is seen eating a dead security guard in Half-Life: Blue Shift. The Houndeye's mouth is located on the underside of its belly, close to the eye, filled with what appears to be fang-like incisors.

In a pack, Houndeyes may doze off after a while, awakening if they hear a sound nearby or the pack leader sees danger.

The damage and the color of the Houndeye's sonic attacks change depending on the number of units in a squad.[4] Squad members lose their ability to charge their shock waves and revert to their base attack when their leader gets killed. However, this does not occur when a random unit in the squad gets killed:

The Houndeye is one of the few creatures from the series that went virtually unchanged from the first sketch.[2] It was originally nicknamed "Roundeye".[2] According to Ted Backman, designer of the Houndeye, its anatomy was inspired by a huge three-legged tabby cat named Tripod that lived in his neighborhood as a child.[2] Its eye was originally to feature prismatic coloring,[2] possibly cut for difficulties in implementation at the time of Half-Life's release. However it was apparently made for the cut Half-Life 2 model. The markings were designed to break up its silhouette.[2]

This creature was initially designed as a friendly character, but play-testing revealed players’ tendencies to "shoot first and ask questions later".[5]

In Online Gaming Review's early Half-Life Monster of the Week Feature preview, the Houndeye was given the taxonomic designation "Sonicanis myriops" [Lat. "Many-eyed Sound-dog"].[6] Houndeye were originally to use digestive fluid and its claws as attacks,[2] while it only uses its sonic attacks in the final version. The sonic attack had been intended to stun the player which would allow the other members of the pack to attack with their claws.[2] The pack leader was originally going to be more visually distinct from the other pack members by using a unique animation in which stood on its rear leg to survey its surroundings. This animation, named leaderlook, is still present but unused in the model and can be seen in pre-release screenshots for Half-Life.

Hostile Takeover, a cancelled expansion pack for Half-Life, was to have a larger version of the Houndeye, dubbed Big Houndeye. They were able to emit powerful blasts that could push the player over great distances. This ability would prove extremely deadly in areas with hazards such as cliffs.[7]

In Half-Life: Source, a new sound effect (sound/player/general/sonic_damage.wav) plays when the player gets hit by a sonic attack. 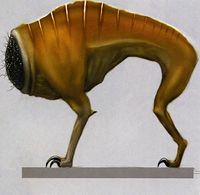 Concept art for the Half-Life 2 version.

The Houndeye was originally to appear in Half-Life 2.[1][2] Much thinner than the bulky, healthy Houndeye seen in Half-Life and its expansions, hunger was to have turned it into a fierce and voracious predator.[2] Its model featured in the playable Half-Life 2 leak files is broken and cannot be viewed nor used (it is a 0kb file). Only the image preview gives insight of his appearance, corroborated by concept art in Raising the Bar.[1]

In Half-Life 2: Raising the Bar, the final version as well as its uncorrected proof, it is featured in four vignettes written by Marc Laidlaw: In Timelapse Opening, distant cries of Bullsquids and Houndeyes can be heard in a desolated landscape during a timelapse visually showing the passage of time between Half-Life and Half-Life 2.[8] In the story Train to City 17, it is glimpsed during the original train ride to City 17.[9] In the story The Slideshow Briefing, in a slideshow shown to Gordon at Eli's lab used as another way to describe the events between the two video games, one of the images shows packs of Houndeyes roaming in suburban areas.[10] In the story In the Ant Lion's Den, set in the Wasteland, Freeman glimpses the sounds and attack flash of an isolated Houndeye, and also wonders how they fare in the surrounding quicksand.[11]

In the WC map pack, it can be found in maps such as, among others, guard3 (September 2001), featuring a short fight between an Antlion Guard and a couple of Houndeyes in a cave, and Canals maps such as canals_01 and its variants (June to September 2002), canals_industrial01 (November 2002), and prefab_canals (December 2002).[12]

In the April 24, 2013 patch for the test version of Dota 2, an incomplete Houndeye courier model was added to the game. The model is based on its portly appearance from the original Half-Life carrying a brandy barrel akin to a St. Bernard rescue dog. The update included a normal and flying variation, the latter possessing wings.