The Xen Cougher,[1] also known as the Xen Fungus,[2] is a type of Xen fungus that first appears in Half-Life: Alyx. 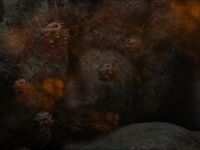 The fungi thrives on organic hosts, infecting and mutating them by producing infectious spores. When a host becomes infected by these spores through inhalation or otherwise, they transform into a monstrous creature riddled with fungal growths. Jeff, a former Combine Hazmat Worker met at the Golden Lion Distillery, is the only known victim of this.

Although parasitic, the fungus is not entirely dependent on a host for survival, being seen attached to walls and other parts of the environment. It is commonly seen in the City 17 Quarantine Zone. Alyx Vance came into contact with this type of alien flora, but was spared from mutation due to her covering her mouth when in close proximity.

The Xen Cougher is known to go through at least two stages: the harmless seedling, that comes in two models, and the mature fungus that spews spores.

The Xen Cougher was used specifically to solve a long-standing challenge that the developers had with illustrating Jeff's personal perimeter. At first, solutions such as glowing tentacles on Jeff are tried to indicate the dangerous zone around it, however they proved ineffective for the playtesters who soon became adept at avoiding Jeff, making the chapter unchallenging. In the end, Coughers are used not only as an environment hazard, but also as implants on Jeff itself to give players visual feedback of the safe distance.[3]

The fungus is similar to the Cordyceps Brain Infection from The Last of Us.