The Armored Headcrab is a Headcrab variation introduced in Half-Life: Alyx that features a bullet-proof shell across its top. It first appears in the chapter The Quarantine Zone.

The Armored Headcrab appears and behaves largely identically to the normal Headcrab apart from its hard green shell with protruding red spikes on its back and on the joints of its front legs that renders it impervious to all attacks except those to its underside or unarmored parts of its body. Like all Headcrab variants, the Armored Headcrab can latch onto the skulls of victims, creating Zombies that are immune to headshots. Once an Armored Headcrab Zombie is killed, the Armored Headcrab will detach and begin searching for a new host body. To kill an Armored Headcrab, one must wait for it to lift its front body before pouncing, exposing a glowing heart in its mouth which spontaneously explodes upon being shot, tearing the Headcrab's body into pieces. An alternative way to kill one is to aim for the sides of its body that lack the protective armor. This method will often require more ammunition, but will leave the Headcrab intact, with a non-glowing and inexplosive heart.

It is unclear how Armored Headcrabs are formed. However, armor-like growths are seen developing in areas overrun by Xen infestation. Loose armor shells scattered around these growths are also a common sight which Alyx will comment on with curiosity if picked up. One Armored Headcrab is seen initially hiding inside its shell by tucking its legs in, blending in with other nearby empty shells. 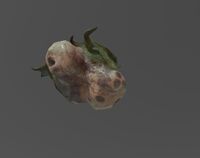 Xen fauna called a "Headcrab Cluster" in the game files is often seen growing near the armor-like growths mentioned above. The fragility of the Armored Headcrab combined with the bits of armor growth on their claws could suggest Armored Headcrabs are relatively young.[source?] Shells are often seen growing onto these clusters, which implies that Armored Headcrabs are born into these shells, and then when they're old enough, they shed them. This would explain all the discarded shells seen by Alyx in the Headcrab infested sewers.

An early render of the Armored Headcrab model includes an unused version with pink crystalline growths on the Headcrab's skin, implying that there were to be different variants of this creature.