Boids,[3] also known as Flyers,[4] are neutral manta ray/bird-like flying alien creatures seen in Xen in Half-Life and its expansions.

Boids on Xen in Half-Life.

The first seen variant of Boids have multi-colored wings resembling fish fins that are fused to its head and a total of eight pronounced red eyes, four each on the topside and underside of its body. They travel in flocks, each possessing a leader with all other members following its path. They can be seen in the background during the G-Man's concluding speech at the end of Half-Life. They also appear in Opposing Force in an area of Xen accessed with the Displacer Cannon when activated in the Biodome Complex.

A second variant is featured in Blue Shift. This variant was originally created for Half-Life but replaced during development. Primarily yellow in color, this version has a tail and a total of six small red eyes, three on each side of its body pointed straight ahead. They appear in Xen in the chapter Focal Point seen flying around an area with floating islands. In this appearance, the Boids here are prop models attached to moving brushes (func_rotating) with no artificial intelligence. 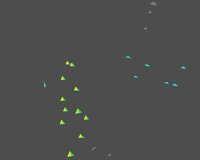 The flocking behavior was coded by Karl Deckard,[1] and Steve Theodore modeled, textured, and animated the creatures.[2] Prior to the game's release, Boids were prominently featured in early previews being highlighted in their own room of the technology demonstration map in the Half-Life Alpha.

They appear to be inspired by Boids, an artificial life program developed by Craig Reynolds in 1986 which simulates the flocking behavior of birds. The name "boid" corresponds to a shortened version of "bird-oid object".[5]

The Boids' flocking behavior is entirely dynamic, functioning without any need of navigation nodes or scripting in the levels. Upon map load, a group will select a leader and remain behind it in close proximity as they roam around. The leader will attempt to avoid obstacles in its path, turning its group away from any possible collisions. Originally, it was possible to injure and kill Boids. If a flock's leader was killed, the group would select a new leader to take its place. They were to emit cries of agitation (boid_alert) when a member in their group died.[6]

The multi-colored Boid model, boid.mdl, only has a single animation: its flying cycle. Only the yellow variant model, aflock.mdl, possesses a complete animation set showing the creature reacting to damage: hit (flinch from a hit), wounded (flying with visible strain), and crash (falling to its death). The code to utilize these animations was not implemented.[6]