"Jeff" is the nickname given by Larry to a blind, mutated creature featured in Half-Life: Alyx encountered in the eponymous chapter.

Jeff is a Combine Hazmat Worker in the Golden Lion Distillery who has mutated into a unique kind of zombie, due to sustained exposure to infectious spores and the lack of a Headcrab controlling any biological functions. His original human head is split in two and lined with rows of sharp teeth with a second mouth inside, resembling that of a monstrous Venus flytrap. His right arm has swelled up into a colossal, muscular limb with protruding fleshy spikes, and several large Xen Coughers have overtaken his back which continually release spores clouds into the air, which causes any nearby humans to violently cough. Jeff is hostile to any living beings around him, and will not hesitate to attack anyone in his proximity, as he can be seen brutally killing several Headcrabs during the chapter. Because he still retains his Combine authorizations of a Hazmat Worker, he can freely travel through Force Fields to chase after targets. On his belt are several pieces of equipment such as a flashlight and pouch, unseen on any other Hazmat Workers.

Alyx Vance is first introduced to the creature by Larry while she's passing through the Distillery. Larry instructs her on how to use sounds to predictably lure Jeff around and to cover her mouth so as not to cough when inhaling spore clouds emitted by Jeff and the Coughers dotting the place. Alyx attempts to lock Jeff in a fridge and sneak onto an elevator to safely travel to another floor, but after an electrical mishap, she ends up needing to unlock him again and bring him along on the ride. Jeff follows her to a storage room where she searches for three batteries to power up a Combine tunnel seal. At the end of the chapter, Alyx manages to trap Jeff inside a trash compactor, and the player is given a choice to either activate the machine and fatally crush him or to spare him and leave him trapped. After Jeff is crushed in the trash compactor, his corpse will spew one last cloud of spores if the player gets close enough to examine it. 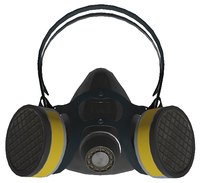 Respirator to use to prevent coughing.

Although completely blind, Jeff possesses an extremely sharp sense of hearing, so he can quickly locate the source of any sound made and go after it. While this makes him hard to avoid at times, it can also be exploited to Alyx's advantage, as Jeff can be easily distracted by the sounds of thrown objects, especially the vodka bottles scattered in great numbers around the Distillery. He is immune to all gunfire which only sends him into a state of rage, so it is definitely not advised to waste ammo and attract him.

Jeff is unbelievably powerful, being able to tear apart metal and rip up flesh with ease. Upon catching a victim, he will spew out enormous amounts of what appears to be a black corrosive liquid on it before dismembering it with brute force. The spores he and Xen flora spreads will make Alyx cough, alerting him of her presence, but it can be avoided by covering one's mouth or wearing a respirator mask. After doing so, Alyx can stand near Jeff without alerting him, unless they come in direct contact.

The idea of a blind, unkillable enemy came up very early in the game's development. A model of a regular zombie was used for the initial tests, earning Jeff the "Blind Zombie" nickname by which he is referred to internally, while the level itself was just a large box he wandered around while the player had to avoid him. Even so, the concept proved to be largely successful with the playtesters. Several designs were made for the Blind Zombie's appearance; for a long time it was a Combine robot with damaged face to make its blindness apparent. The developers eventually decided on a unique appearance, not affiliated with the Combine or any of the game's creatures, as a way to signal to the player that this enemy requires a different approach.[3]

Early puzzle tests featured closer interactions with Jeff himself, like hanging objects on him or stealing a keycard from his pocket. The mouth covering gesture was added as a response to the playtesters doing so instinctively to avoid coughing from the spores released by Xen fungi that make Alyx cough.[3]

The first version of Jeff's ending involved the player's actions unintentionally resulting in Jeff being attacked and dragged away by Antlions. Part of the goal was to demonstrate that the Antlions are even more powerful than Jeff to amp up the tension just before the player has to square off against Antlions themselves. However, this ending left playtesters feeling a little empty, and they felt detached from Jeff's demise and wanted to be more directly involved.[4]

A couple of early concepts for Jeff depict a baby Tentacle among the Xen flora protruding from his head. The two creatures share some similarities as they are both blind enemies that hunt by sound, are extremely deadly, and cannot be killed through normal combat.