This article describes the Half-Life: Alyx storyline, chapter by chapter.

The original Half-Life takes place at the Black Mesa Research Facility in 200-. During an experiment, researchers at Black Mesa accidentally cause a Resonance Cascade which rips open a portal to Xen, a parallel universe, and the only known borderworld. Creatures from Xen flood into Black Mesa via the portal and start killing everyone in sight. The player takes on the role of Dr. Gordon Freeman, one of the scientists who has been involved in the accident, and who now must escape the facility.

At the end of the game, a mysterious figure referred to as the G-Man extracts Gordon from Xen, where he defeated the leader of most of the Xen forces, the Nihilanth, and "offers" a job to Gordon. Forced to agree, Gordon is subsequently put into stasis for approximately twenty years.

A view of City 17's landscape from Alyx Vance's balcony.

A Combine Ordinal interrogates Eli Vance while being restrained by a Combine Charger.

"I spotted the Combine moving supplies into the Quarantine Zone. That place has been deserted for years."
― Alyx Vance[src]

Half-Life: Alyx begins five years prior to Gordon Freeman's arrival and the uprising of City 17. Resistance members, 19 year old Alyx Vance, her father Eli and soon to be companion, Russell steal a mini-reactor from the Combine. However, Eli catches sight of a strange floating vault structure in City 17's Quarantine Zone, which triggers a massive manhunt by the Combine that results in the capture of both Alyx and Eli. Russell manages to rescue Alyx with the help of his drone and warns her that the Combine will transport Eli to Nova Prospekt, a feared Combine high security prison, for interrogation. Alyx is given a gun and a pair of Gravity Gloves. The gloves feature a display granting Alyx the ability to view her health, Resin and ammunition, and the ability to pull light objects to her grip by flicking her wrist.

Entrance to the Quarantine Zone within City 17.

Gary prepares to cook a Headcrab in his hideout.

"Just outside there's a second train that also leads out of City 17, through the Quarantine Zone."
― Russell[src]

Alyx ventures into the Quarantine Zone outside City 17 to intercept the razor train carrying Eli. Along the way, she meets an eccentric Vortigaunt named Gary that makes vague allusions about Eli Vance suffering an untimely death in the future. Gary explains that the Combine performed a procedure on his brain that severed him from the Vortessence, and as a consequence he is “alone in his head”. He asks Alyx to help free his fellow Vortigaunts, who are being used as biological batteries to keep the floating vault structure afloat.

Chapter 3: Is or Will Be[edit]

Gary says he will accompany Eli back to Russell's Lab.

"I will help the Alyx Vance! Look to the Northern Star."
― Gary[src]

After making her way through the Quarantine Zone, Alyx is able to derail the train, killing at least three Combine Advisors within it. Gary rescues Eli from the wrecked train and Eli warns Alyx that, while in custody, he learned that the Combine are apparently storing a superweapon in the floating vault in the Quarantine Zone. Gary instructs Alyx to “look to the Northern Star” to find and infiltrate the Vault and steal the weapon before the Combine can relocate it to a more secure location. While Alyx believes Gary’s instructions are simply another example of Vortigaunts speaking in riddles, it is proven that Gary speaks in a literal sense in this case.

Alyx navigates through The Terminal Gardens Metro Station where she must fight more Combine forces, before exiting the station and seeing the Northern Star, which appears to be an actual location (a hotel), across a courtyard.

The exterior of the Northern Star hotel with a Combine substation attached to it.

"No… the Vortigaunt will extract ourselves and exact our own vengeance. YOU must go to the weapon."
― Vortigaunt[src]

Alyx enters the Northern Star hotel and journeys to its rooftop, navigating through overgrown rooms full of Xen flora as she moves towards the Vault. In the hotel, she discovers "lightning dogs", Headcrabs which can enter host bodies and generate electricity. Throughout this, Alyx is also pursued by Combine soldiers attempting to hunt her down.

Eventually, Alyx is able to shut down one of the many substations keeping the Vault afloat in the sky. She discovers that each substation contains an enslaved Vortigaunt which is forced to channel its electrical energy to the Vault to power it. Grateful for its freedom, the liberated Vortigaunt promises Alyx to rally its peers to take down the remaining substations.

Alyx stumbles into an abandoned area and then makes her way through rooms full of zombies, barnacles and soldiers before finding a room filled with tripmines, blocking entry to a vodka distillery, where she must disarm the tripmines before fighting more soldiers to enter the building.

A long since abandoned Vodka distillery. 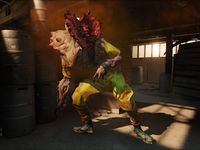 "I'm taking off. But good luck in there. And don't underestimate our boy Jeff. He, uh, he doesn't have much patience."
― Larry[src]

Inside the distillery she meets a human survivor, Larry, who appears to be stranded with a monstrously mutated Combine Hazmat Worker nicknamed Jeff. Jeff appears to have been mutated due to exposure to spores, turning into a bizarre and violent creature that is blind but can detect movement via sound. Alyx maneuvers her way around the vodka distillery while avoiding Jeff, ultimately tricking him into a trash compactor where he is incinerated or confined (depending on the player's choices).

The shattered aquatic exhibits at the Central Zoo.

Alyx then descends past an abandoned zoo and into a network of tunnels full of Antlions. Eli then gets into contact with her and warns her that the vault isn't storing a weapon, but is in fact a prison containing something or someone that even the Combine fears. The vault appears to have been constructed around an entire apartment building in order to contain whatever or whoever is inside it -- the vault, containing the entire apartment complex, was then made to levitate in the sky in the Quarantine Zone as an extreme containment measure. Alyx continues on, reasoning (along with her father) that whatever or whoever is inside the vault, can help them fight the Combine.

The Vault and the back up Combine substation.

The silhouette of the Scientist speaking to a Combine Advisor.

"Look, this guy we've got there survived Black Mesa. He raised holy hell and then just disappeared. We finally caught him and you're going to let him go again?"
― The Scientist[src]

After witnessing the deactivation of the last Combine substation, the entire Vault structure crashes into the ground. However, a back up device emits a field which raises the Vault back to being suspended in air. Alyx immediately sets her focus on disabling the back up device, and begins journeying toward it. After battling through a swarm of Antlions and Combine Overwatch soldiers, her and Russell notice someone through the window of a building. Upon entering, Alyx overhears a mysterious unidentified woman (known as The Scientist) venting her frustration at a Combine Advisor for not being able to keep the vault sufficiently guarded. The woman is seen talking via video relay to the Advisor, whom she urges to move the vault away as quickly as possible before Alyx can get to it. During the conversation, Alyx overhears the unidentified woman mention that the vault contains a survivor of the Black Mesa Incident who "then disappeared". Eli deduces that the woman must be referring to Gordon Freeman, and tells Alyx it is of utmost importance that he is freed.

A Combine Strider and a Combine Mounted Gun.

Alyx fights her way through the Combine Overwatch forces and finally causes the Vault to come crashing down to surface. Alyx awakens in debris caused by the Vault's collapse and ventures down into a destroyed parking garage. Eventually, she finds a Combine Grunt kicking an incapacitated Strider with another Grunt ordering him to "stop kicking it". After Alyx deals with the two soldiers and restores power to a nearby elevator, the formerly incapacitated Strider regains consciousness and begins firing at her. This forces Alyx to flee through the debris of various destroyed structures while simultaneously battling various squads of Combine Overwatch soldiers. Eventually, Alyx finds a Combine Mounted Gun on a damaged Combine Prisoner Transport and uses it to defeat the Strider.

Moments later, Alyx walks into a green beam that appears to be pulling objects into the Vault. Russell wishes Alyx good luck as she ascends up into the Vault just before Eli interjects with a warning but is seemingly cut-off by radio interference caused by the structure.

The exterior of the icosahedral cell containing The G-Man.

Dog stands behind Eli Vance who's handing a crowbar to Gordon Freeman.

"Some believe the fate of our worlds is inflexible. My employers disagree. They authorize me to… nudge things in a particular direction from time to time."
― The G-Man[src]

Boarding the Vault, she finds a seemingly abandoned apartment complex which it was built around, but suspended in a highly surreal state: bedrooms, kitchens and living rooms are superimposed on top of one another and people living within the complex are seemingly trapped in a certain point in time, and seem to constantly fade into and out of existence. Indescribable physical phenomena permeate the entire apartment complex, which appears to be under the influence of some powerful space-time disturbance, rendering its existence bizarre and unpredictable.

Alyx navigates through the surreal contents of the Vault, battling the last bastion of Combine Overwatch soldiers stationed there using a form of power similar to the Vortigaunts. After defeating the soldiers, she crosses a narrow energy bridge and finds a strange icosahedral prison cell in its center which she breaks open. However, instead of finding Gordon Freeman, she instead releases the G-Man, a mysterious human-like being who possesses an incredible level of power over the fabric of space and time.

The G-Man explains that his “employers” authorize him to occasionally “nudge” the course of fate, and as thanks to Alyx for freeing him, offers to “nudge” something of her choice for her. Alyx asks for the removal of the Combine from Earth, but the G-Man replies that such a request is too much and contradicts his “employer's” interests. However, the G-Man instead offers Alyx the chance to save Eli, and shows her the future event where Eli is killed by a Combine Advisor at the end of Episode Two. Alyx uses her Gravity Gloves to kill the Advisor, saving Eli and changing his fate. However, the G-Man then points out that Alyx has proved herself capable of replacing Gordon, whom the G-Man has grown dissatisfied with due to Gordon being unable or unwilling to carry out his given mission. The G-Man then leaves, having trapped Alyx in stasis.

In a post-credits scene, Gordon regains consciousness in the Resistance's White Forest base (during the ending of Half-Life 2: Episode 2) and finds Eli alive but Alyx missing. Eli becomes furious when he realizes that the G-Man must have taken her and promises to "kill that son of a bitch". Unbeknownst to Eli, the G-Man can be seen watching from the far left of the warehouse, before walking away and seemingly fading out of existence. Alyx's giant robotic guardian, Dog, arrives with Gordon's crowbar, which Eli returns to Gordon, telling him that they "have work to do."