Half-Life 2: Episode Two is the second in what was intended to be a trilogy[1] of episodic games that served as a continuation of the 2004 first-person shooter game Half-Life 2. Continuing on from the end of Episode One, players once again assume the role of Gordon Freeman as he and Alyx Vance travel through the Outlands on a mission to prevent the Combine from opening a superportal to the Combine Overworld.

Continuing with Valve's method of orienting each episode around a particular theme or set of technologies, Episode Two focuses on expansive environments, travel, and large, nonlinear battles. Following the closing events of Episode One, it sees Gordon Freeman and the series' other major characters moving away from City 17 to the surrounding wilderness.

Episode Two was developed concurrently with Episode One by a separate team. It was released on October 10, 2007 as a part of a bundled package, The Orange Box, but it can also be bought separately through Steam.

Continuing the plot of Half-Life 2 and Episode One, Episode Two consists of seven chapters telling the story of Gordon Freeman and Alyx Vance's journey to a large Resistance base called White Forest.

Half-Life 2: Episode Two generally concentrates on more expansive locales as compared to the claustrophobic Episode One, particularly in its latter chapters, although it ends similarly to Episode One with a pitched battle in a fixed environment. The Muscle Car chapters are very reminiscent of the Highway 17 Chapter of Half-Life 2. Episode Two is also longer than Episode One, at approximately two thirds the length of Half-Life 2.

One of the focal points of Episode Two was meant to be increased use of vehicles in open areas. However, the game retains its original linear style until the final battle.[2] Episode Two has more puzzles than Episode One, including the biggest physical puzzle yet in the series—a damaged unstable bridge.[2] 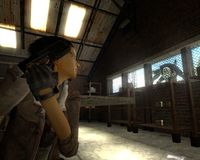 In addition to the enemies featured in Half-Life 2 and Episode One, Episode Two introduces the Hunter - a tripodal fast and efficient Synth used by the Combine as a scout, and the Antlion Worker. As it was discussed in the commentary of the game, both display new, sophisticated types of A.I.: the Antlion Workers' in their 'standoffish' approach, and the Hunters' intelligent flanking and flushing out maneuvers. With the Hunters in particular, due to their resistance to conventional attacks, their deadly close combat moves, and their weakness to thrown objects, the developers hoped to encourage players to interact with the game environment more closely, and try different tactics when battling them. Antlion Grubs are also featured in the earlier levels of the game, though they do not play a combat role.

The game also reveals the characteristics of the sinister Combine Advisors, which play a much more central role to Episode Two than in previous installments.

Although no new weapons as such are introduced, the Strider Buster, used to defend White Forest against a Combine offensive, is crucial to the last stages of the game. Valve stated before the release that they were not interested in creating new weapons, as they were more interested in exploring every dimension of the Gravity Gun, the Strider Buster being the outcome of this. This decision came in spite of the fact that the lack of new weaponry in Episode One was one of its most criticized aspects.

Episode Two was developed simultaneously with Episode One by a development team led by David Speyrer. This schedule of simultaneous development aided them in streamlining the story between the two games to create an immersive storyline. The technology used was the same for both games, allowing the development teams to quickly fix any technical problems that might arise from either game; this happened often because of the multi-platform release.[3]

An announcement was made on July 13, 2006 stating that Episode Two would be released on Xbox 360 and PlayStation 3 in addition to the PC, where previous iterations of the series separated. On June 14, 2007 Valve confirmed the release date for Episode Two to be October 9, 2007 for all announced platforms. Valve handled the development of the game for the PC and Xbox 360, while Electronic Arts British office in Chertsey worked on the PlayStation 3 version of the game.[4] It was announced on September 7, 2007 that the PlayStation 3 version of the game would be delayed because the development studio behind the game was in the United Kingdom, away from Valve's development team, and therefore lagged behind in its schedule. Valve's marketing director, Doug Lombardi, gave assurance that the Xbox 360, PlayStation 3, and PC versions of the game would be identical in functionality and performance.[5] 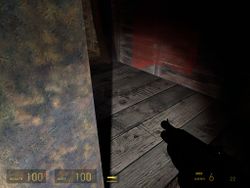 An example of the dynamic flashlight shadows featured in Episode Two.

Running on the so-called "Source 2007" version of the Source engine, Episode Two comes with numerous technical improvements and new features as well as those introduced in Episode One (such as Phong shading and HDR lighting). Some of the more important technical improvements seen in Episode Two are: motion blur, improved dynamic lighting and shadowing, soft-particle system, and dual and quad-core CPU optimizations.

In addition to the widely-publicized new features, there are also a number of less noticeable but nonetheless significant improvements. Lighting effects have been improved even further since Episode One, with the bloom effects toned down slightly to give the game a slightly less surreal look. Many character models have been improved upon once more, while the A.I. is slightly more sophisticated, most noticeably in the behavior of the new enemy - the Hunter synth. Most textures have been improved, special shaders have been applied to many characters and objects and almost everything is bump mapped.

Dan Adams of IGN rated the game 9.4 out of 10 and praised its improved visuals and expansive environments, but cited the short six-hour length as a drawback.[8] He said: "Any way you look at it, Episode Two stands out, even among the Half-Life series, as something special ... a burly experience packed into roughly six hours or so that offers up all the diversity, level design, and thoughtful gameplay we've known while making sure to propel the story forward and leave us wanting more."[8] Bit-tech.net awarded the game a 10 out of 10 score, citing approval of how the story turns and the introduction of side stories and new characters.[9] 1UP.com praised the game, noting that the game's "entire five-hour experience" was "vivid, emotionally engaging, and virtually unsurpassed."[10] PC Gamer UK also applauded Episode Two, noting it "is the most sumptuous chapter of the Half-Life saga, and by a country mile."[11] The New York Times enjoyed the gameplay, saying, "The battles in Episode 2 of Half-Life 2 often require as much ingenuity as they do fast reflexes."[12]

Computer and Video Games commented on the game's graphics, saying that although the game's engine was "starting to look its age," its "wonderful art design and the odd bit of technical spit-shine ensure that Episode Two [...] doesn't lose any of its wow factor." They also noticed that the game "goes about fixing a lot of the niggling complaints we had about Episode One," especially applauding the open forests and rocky hills from Episode Two.[13]

Several reviewers noted shortcomings. The New York Times commented on the story for Episode Two, noting, "While it sows a few seeds for the final episode of the trilogy, the game lacks the driving force of the previous episode."[12] GameSpy criticized the game, saying it is "a little more inconsistent than its predecessors," and that the opening segments of the game were "arguably the weakest" parts.[14]

There are 19 Achievements in Half-Life 2: Episode Two worth 210 Gamerscore points.

The Half-Life 2: Episode Two soundtrack was composed by Kelly Bailey.