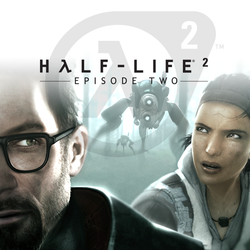 The Half-Life 2: Episode Two soundtrack was composed by Kelly Bailey. It was released in part on The Orange Box Original Soundtrack.

Using an appropriate program, it is possible to extract all audio tracks heard in-game from the ep2_pak_dir.vpk archive file. The soundtrack was also included in the game directory of both the full and demo Audiosurf releases on Steam as part of Audiosurf's The Orange Box Soundtrack. On September 24, 2014, the soundtrack was made available as free DLC to all owners of the game on on Steam. On March 16, 2020, Valve partnered with independent record label Ipecac Recordings to release several of the Half-Life series soundtracks on streaming services.[1]