Valve Corporation is an American video game and digital distribution developer based in Bellevue, Washington.[2] Their first game, Half-Life, was highly acclaimed and they have since gone on to develop more franchises, including Team Fortress, Counter-Strike, Day of Defeat, Portal, Left 4 Dead, and Dota.

Valve also developed the popular Steam content delivery client, which is now the market leader with, as of December 2012, over 2000 games available, 54 million active user accounts, and with 70% of the market share.[3] Valve releases all of their games via Steam.

Valve was founded on August 24, 1996[4][5] by two former Microsoft employees, Gabe Newell and Mike Harrington. They originally started out as an L.L.C. company based in Kirkland, Washington, however, after incorporation in 2003, Valve moved from Kirkland to Bellevue.

Following the success of Half-Life, the Valve team expanded their portfolio, creating mods, spin-offs, and sequels. Valve has accumulated rights to at least seven different series which include Half-Life, Team Fortress, Counter-Strike, Day of Defeat, Portal, Left 4 Dead, and Dota. Valve are also noted for their support of the modding community. In fact, their games Team Fortress, Counter-Strike, and Day of Defeat all started out as third-party mods before becoming full-fledged games. Valve distributes some community mods on their content delivery system, Steam. 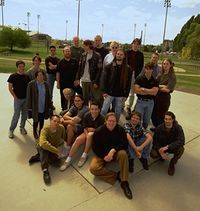 Possible blueprint from offices at Valve featured in the background images of the Half-Life instruction manual, presented like a BMRF blueprint.
Main article: Half-Life and Portal universe

Valve began working on the first game of the Half-Life series soon after the company's formation, and settled on a concept for a horror-themed 3D action game, using the Quake engine as licensed by id Software. Half-Life was a hit at the 1997 E3 convention, where its animation system and artificial intelligence were demonstrated. The game's success led to its first expansion pack, Half-Life: Opposing Force, which was developed by Gearbox Software, a company based in Plano, Texas. Randy Pitchford, founder of Gearbox, said in an interview that he believed Valve gave them the opportunity to produce a sequel to Half-Life to allow Valve to focus on future titles. The game was demonstrated at the 1999 E3 convention, where new locations, characters, and the storyline were revealed.

On November 16, 2004,[6] Half-Life 2, the sequel to the original game, was released. Following its release, the series was continued using a trilogy of episodic games. Half-Life 2: Episode One was the first of these, set around City 17 after the events of the original game, in which Gordon Freeman and Alyx Vance must attempt to escape the city after a dark energy reactor core they damaged at the end of Half-Life 2 threatens to destroy the city. It was released on June 1, 2006,[7] and introduced several new graphical effects including new lighting features and facial animation.

The second episodic game, Half-Life 2: Episode Two, was released on October 10, 2007,[8] and continues the story soon after where Episode One ended. This episode focuses on expansive environments, travel, and less linear play. It was released in The Orange Box along with Half-Life 2, Episode One, Portal, and Team Fortress 2.

On March 23, 2020,[9] Half-Life: Alyx was released for SteamVR compatible VR headsets, marking Valve's return to the franchise after more than a decade of absence. A feature length VR game, it takes place five years before the events of Half-Life 2.

Portal is Valve's professionally-developed spiritual successor to the freeware game project Narbacular Drop, the 2005 independent game released by students of DigiPen, who are now all employed at Valve.[10][11] Released on October 10, 2007,[12] the game was only available as part of The Orange Box, however after its success it is now available separately on Steam. The game follows Chell, a test subject in the Aperture Science Enrichment Center, who must use the Handheld Portal Device to navigate through nineteen Test Chambers, all the while being guided by a sinister AI who offers "consoling" advice.

On March 1, 2010, Portal was updated to tie in with an alternate reality game, which was eventually revealed to be promoting a full sequel, Portal 2. Portal 2 was officially announced on March 5, 2010[13] and was confirmed to be a full-priced standalone game, taking place in an unknown area of Aperture Science Enrichment Center.

Valve announced its Steam content delivery system in 2002. At the time, it looked to be a method of streamlining the patch process common in online computer games. Steam was later revealed as a replacement for much of the dated framework of WON and Half-Life multiplayer and also as a distribution system for entire games since 2005. It was released on September 12, 2003.[14]

As part of Steam, Valve developed the Valve Anti-Cheat system, an anti-cheat solution that prevented players from changing the game code to gain an advantage over other players. It is now implemented as a part of Steamworks, a publishing suite that gives developers access to every component of Steam.[15]

In 2015, Valve announced the HTC Vive VR headset together with consumer electronics manufacturer HTC. Standout features at the time included the inclusion of a pair of controllers, as well as a pair of tracking stations that allowed the user to walk around freely in and interact with their virtual environments.[16]