"The next five years, when you look back, it's going to make today look like the stone ages."
― Gabe Newell[src]

Gabe Logan Newell[2] is the co-founder and current president of the independent game development and online distribution company Valve Corporation.

After dropping out of Harvard University (1980 - 1983[source?]), Newell spent thirteen years working for Microsoft Corporation (November 1983 - June 1996),[source?] ultimately becoming a "Microsoft Millionaire". Newell has described himself as "producer on the first three releases of Windows".[3]

Later on, inspired by Michael Abrash (who left Microsoft to work on the video game Quake at id Software), Newell and another Microsoft employee, Mike Harrington, left Microsoft to found Valve in 1996.[3] Harrington and Newell used their money to fund Valve through the development of Half-Life, starting with twenty-eight people.[4]

The main goal with Half-Life was to build the most exciting and technologically advanced game possible.[5]

To get inspiration for the design of some parts of Half-Life, Newell played a lot of Resident Evil 2 and Super Mario 64.[6]

During the production of Half-Life 2, he spent several months focusing on the development of Steam.[7]

In 2007, Newell openly expressed his displeasure over developing his software for gaming consoles, particularly the PlayStation 3. In regard to the system, Newell was once quoted as claiming that developing processes for the console in general was "a waste of everybody's time"[8] and "a disaster on many levels ... I'd say, even at this late date, they should just cancel it and do a do over. Just say, 'This was a horrible disaster and we're sorry and we're going to stop selling this and stop trying to convince people to develop for it'."[9] Nevertheless, at E3 2010, Newell appeared on stage at Sony's keynote; while acknowledging his past outspoken comments on console development, he discussed the open nature of Sony's PlayStation 3 platform, and announced Portal 2 for the console, remarking that with Steamworks support it would be the best version for any console.[10] Newell has also criticized the Xbox Live service, referring to it as "a train wreck".[11]

In December 2010, Forbes named Newell as "A Name You Should Know" mainly for his work on Steam having partnerships with multiple major developers.[12][13] In March 2012, Forbes estimated the net worth of Newell as $1.5 billion dollars, ranking 854th out of 1,226 global billionaires.[14]

On an older version of Valve's official website, his function was described as follows: Gabe held a number of positions in the Systems, Applications, and Advanced Technology divisions during his 13 years at Microsoft. His responsibilities included running program management for the first two releases of Windows, starting the company's multimedia division, and leading efforts on the Information Highway PC. Then he started Valve. His most significant contribution to Half-Life, the company’s debut title, was his statement: "C'mon, people, you can't show the player a really big bomb and not let them blow it up."[15] 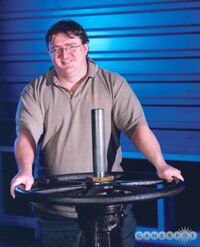 Newell is married to Lisa Mennet (he married August 24, 1996 - the same day he founded Valve) and has two sons.[16] He suffered from Fuchs' dystrophy, a congenital disease which affects the cornea, but was cured by two cornea transplants in 2006 and 2007.[17]

Since at least the late 1990s, Gabe Newell is most of the time seen wearing polo shirts, often of the Ralph Lauren brand.

His surname appears in Half-Life as an Easter egg on a Sector D sign.