"Casting choices are incredibly hard, especially considering the time gap. With the game being a prequel featuring an even younger Alyx, when we heard Ozioma's performance we knew we'd found the right Alyx."
—Greg Coomer[src]

Ozioma Akagha is an American voice actress who provided the voice of Alyx Vance in Half-Life: Alyx, succeeding Merle Dandridge in the role.

Akagha has been acting in television, film, and video games since 2012. Before being cast as Alyx Vance in Half-Life: Alyx, Akagha provided the voice of Plastic in Mirror's Edge Catalyst and the voices of Barbara Casey, Zena Woodard, and Angela Cummings in Wolfenstein II: The New Colossus. Notable recurring television roles include Bumblebee on Teen Titans Go! and Tamar on the Marvel Television series Runaways.[1]

Although Valve initially worked with Merle Dandridge, the voice of Alyx Vance in Half-Life 2 and its episodes, on Half-Life: Alyx, they eventually decided to cast another actress in the role,[2] in part due to the length of time that had passed since Episode Two.[3] Akagha started recording her lines as Alyx in September 2019. Though she had not played any of the Half-Life games before booking the role, she had previously heard of the series through her brothers, who she described as "big gamers". Akagha did not speak with Dandridge about the role of Alyx, saying that she "leaned heavily on the writing and the world that these characters live in" to form her own "interpretation of what this character is and who she is, as well". Akagha stated that the response she has received since her role was revealed has been nothing but supportive, adding "Half-Life fans are the warmest people".[4] 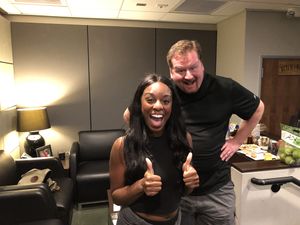 A photo of Akagha and Jay Pinkerton taken by Erik Wolpaw after Akagha's first recording session as Alyx Vance.[5]