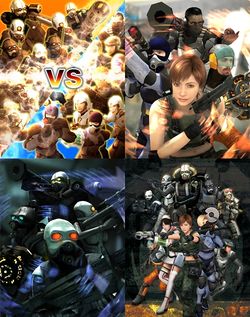 Menu images of the Battle mode.

The Battle Mode is one of the three game modes of Half-Life 2: Survivor. It is the main Survivor's game mode, featuring most of the custom made content, which includes 5 playable characters with a total of 50 various weapons and items available to them, as well as 14 maps to play on.

Players are divided in two teams, red and blue, with four players in each. The main objective is either to earn more points than the enemy team within the 5 minute time limit, or to earn a total of 25,000 points. Team points are awarded for dealing damage to enemy players. Players drop dog tags upon death, enemy dog tags can be picked up to recover 25 points of both health and suit charge, a certain amount of team points is also given depending on the submode and the killed player. Friendly fire is disabled, but explosions and some of the weapons deal damage to both teams.

Five playable characters with different stats and equipment are available: Ranger, Soldier, Sniper, Engineer and Medic. Each character can be either male or female and belong to Combine or Resistance faction, however unlike the Half-Life 2: Deathmatch, in which Combine and Resistance forces are matched against each other, Survivor allows both teams to have players of any faction.

Each player can only use the weapons they start with, no other weapons can be picked up during the game. Available weapons depend on the character and faction, additional equipment can be obtained by leveling up or through the in-game shop. Each map contains several resupply cabinets which provide infinite supply of primary ammunition (bullets for the SMG and Pulse Rifle). Ammunition is not replenished on respawn and is therefore limited for most of the game's weapons, additional ammunition for many weapons can be obtained from the Special Magazine, which is itself also limited.

Four submodes are available in the Battle Mode:

The Battle Mode includes several status effects — special conditions that can be applied to the players, usually by special weapons or items, that affect their performance in a positive or negative way.[1] These conditions are temporary and will be removed after a certain amount of time or player's death. Many of these effects may also be cured by water or the Recovery Injection, an item used by the Medic. 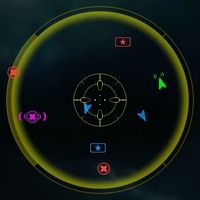 The radar is a circled area located in the middle of the screen, around the crosshair. The radar's border shows approximate positions of the enemies. It is divided in four segments, each representing a direction. Each segment's color will increase its brightness based on the number of enemies in that direction, or will stay transparent if there are none. If the enemies are near the player, the inner part of the radar will begin to glow, but no further information about their position will be provided.

Different icons marking exact positions of the players from both teams may also appear on the radar:

All characters have male and female variants, which differ only by appearance, and can also be of Combine or Resistance faction. The Combine characters have higher firing accuracy, but the Resistance characters have a slightly higher ammo capacity for their weapons. They also use different melee (Crowbar and Stunstick α) and primary (SMG and Pulse Rifle) weapons. The third weapon from the initial equipment is also different, but each faction can obtain the other faction's one by reaching the D-Class. Some of the additional equipment items are also unique to a single faction, with Resistance characters using mostly defensive items, while the Combine prefer more offensive ones.

The stats of all the characters are following:[2]

Note: these are the stats that are displayed in the menu and on the official website, not the ones used in the game. They do not precisely indicate how much a certain character is better than another, they are mostly used to indicate just who is better.

The Battle Mode features all 12 weapons from the Half-Life 2: Deathmatch, and adds another 38 new and unique only to the Battle Mode, making it a total of 50 weapons and usable items available to the players.[3]

The Battle Mode features 14 playable maps,[4] two of which are modified Half-Life 2: Deathmatch maps and 12 were created specially for the Half-Life 2: Survivor. Most maps are based on the different locations visited during the Half-Life 2 storyline.

When maps were to be updated, new revisions were added instead of rewriting the existing files. As a result, the final version contains 68 Battle Mode map files comprised of 14 maps with 8 revisions.

Battle Mode's first updates focused solely on the maps. First, Collapsed City, Truss Bridge and Sunset Coast were added. Several updates were made to the maps, each time a new revision number was added and all of the existing maps were updated to that revision, in some revisions new ones were also added: revision 1.1 did not introduce any new maps, Grit Lake and LostTown were added in revision 1.11, and revision 1.2 added Dark Fortress.