Half-Life 2: Survivor is an arcade game based on Half-Life 2. It was released on June 28, 2006 on Taito's Type X+ arcade system, with a 32" widescreen high definition LCD running at 1360x768 resolution. The network service was shut down on February 1, 2010 resulting in multiplayer modes being not available. 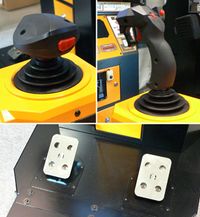 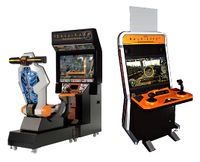 The deluxe (left) and space-saving (right) versions of the arcade machine.

Players control the game using two joysticks (one for each hand) and floor pedals. The left joystick is used to control player's movement, pulling it back twice in a quick succession allows to make a 180 degree turn. A button accessible by the thumb is only used in the Battle mode for opening the radio command menu. Movement of the right joystick allows the player to look around and aim, trigger button performs the primary attack, while the secondary attack is performed by a button on the back of the joystick. A wheel similar that of a typical computer mouse is also present, and is used for switching weapons. Crouching and jumping is done with the left and right foot pedals respectively.

Because of the simplified control scheme, such features of the original game as the flashlight, suit zoom and manual reloading are not available. Lack of a dedicated use key also means that the player cannot pick up random objects by hand, however all the necessary interactions are either performed automatically by walking up to the object, or require shooting at it.

Half-Life 2: Survivor is running on two types of arcade machines.[2] The first one, also known as the deluxe version, has a bigger housing with a seat, and was described by several reviewers as looking similar to a racing game cabinet without a steering wheel.[3] The smaller space-saving version is also available, featuring the upright form-factor. Besides the size and the chair, the main difference between both arcade machines is the sound system: while in the deluxe version speakers are placed both on the front panel and behind the player's head, allowing for 5.1-channel surround sound, the space saving version only has two front panel speakers.

An early version of the space-saving arcade machine also exists and is much more rare to encounter. Its screen assembly appears to be reused from the deluxe version, while the game controls are located much farther away from the screen to make space for the arcade hardware located underneath. The machine incorporates a subwoofer along with front-facing stereo speakers. Unlike in other machines, the left joystick shares the same design as the right one.[4]

The Story Mode offers a single-player campaign that approximates the original game's storyline. In order to make it more suitable for playing on an arcade machine, substantial parts of the game were removed with just the combat sections left behind. Some of the main plot elements are outlined in skippable cut-scenes.

The main Survivor's game mode, featuring most of the custom content and the only mode to receive content updates after the game's initial release, the Battle mode is essentially four-on-four team deathmatch. The players can choose from five playable characters: Ranger, Soldier, Sniper, Engineer and Medic. Each character can be of either Combine or Resistance faction with different stats and available equipment, additional items could also be unlocked by playing.

In Mission Mode a team of up to four players fights against various enemies from Half-Life 2 in order to complete a certain objective within given time. A total of three missions are available, their objectives being to collect gems dropped by the killed Antlions, destroy Zombie houses and escape the level while avoiding traps and fighting Combine forces. Each mission is available in three difficulty levels.

Some of the NESYS card designs.

Like several other Taito's arcade games, Survivor uses the NESYS game network. Special NESYS smart cards were required to save data like the results of the played games for the online ranking, player's name and character.[6] Each card was limited to a single character only, who was chosen during the card registration process and could not be changed later. While it is possible to play without the card, some of the features are inaccessible without it, most notably the accumulation of Battle Points and Survivor Gold. Initially the card was also required to advance past the third chapter of the Story mode and to unlock a difficulty higher than normal in the Mission mode, however these requirements were removed in update 2.07.[7] Each NESYS card was limited to 100 uses, after which a new card would need to be purchased, insertion of a card with no uses into the arcade machine would trigger the process of transferring the saved data onto a new card, during which character's name could also be changed.[8] Cards also had an expiration period: if a card was not used for 90 days, it became unusable and its data could not be recovered.

An online service called the Survivor camp was available to all NESYS card owners, accessible by mobile phones and personal computers.[9] Up to 20 NESYS cards could be registered to a single camp. Players could view the results of their previous games and browse the global leaderboards, as well customize their characters:[10]

Expired cards were allowed to be used with the Survivor camp, however if none of the cards were used for 90 days all the camp data was removed with no possibility to restore it.[11]

Half-Life 2: Survivor was announced on November 1, 2004, 15 days prior to the public release of Half-Life 2.[12] In a self-published press release Taito stated that they are aiming for realistic first-person shooter experience with the help of their new Type X arcade hardware featuring 5.1 digital surround sound and widescreen display. The game was first revealed to the public at Taito's private exhibition in Tokyo on November 29, 2005.[13] It was originally meant to be released in summer of 2005,[12] but was later pushed back to March 2006[13] and then to June 28.

The space-saving version of the arcade machine was showcased at AOU Amusement Expo on February 17, 2007[14] and began operation after March.[2]

On July 6, 2007 a massive update named Half-Life 2: Survivor version 2.0 was announced.[15] Public testing was held from July 13 to July 26 in 5 Taito-managed stores and 6 third-party stores,[16] on September 15 Survivor 2.0 was showcased again at the 45th Amusement Machine Show.[14] Testers were required to have a special Survivor 2.0 NESYS card, which did not work with the regular Survivor, but could be used after the release of the 2.0 update.[16]

End of the network service[edit]

On October 1, 2009 an announcement was made about the network service termination soon after the launch of the Cyber Diver – Taito's new arcade FPS and a spiritual successor to the Half-Life 2: Survivor.[18] The last random map week began on January 22, 2010,[19] after which since February 1 NESYS cards can no longer be used.

Half-Life 2: Survivor players were able to obtain special titles for the Cyber Diver.[20] Since the Survivor Camp ID was required, registration remained possible until February 25,[18] after which the Camp was shut down.

On June 18, 2013 the complete Half-life 2: Survivor 2.0 content dump was released,[22] soon after that the game was modified to run on a regular Windows PC. The port gives access to the developer console which was disabled in the original arcade version, therefore making multiplayer possible through the use of console commands.

The game requires the screen resolution to be at least 1360x768, as the position of most of the user interface elements was optimized for the arcade machine's resolution and cannot be changed.

The game was met with a generally positive reception. Reviewers found it interesting to play the game in an arcade environment, and considered the shift to an arcade setting an excellent introduction of the Half-Life series to Japan.

Most reviewers agreed that the control scheme, while seeming unusual at first, behaves very intuitively, allowing even people unfamiliar with first-person shooters to play with relative ease.[13][23] Game Watch reporter Kazutaka Toyotomi felt that pressing the floor pedals to crouch and jump "makes [him] feel like 'doing something' rather than just pressing a key". He also praised the developers for paying maximum attention to reducing the possibility of the motion sickness.[13] 4Gamer concluded that the arcade machine might be an interesting opportunity to enjoy the game without having to invest in a new computer or sound system, and encouraged the owners of powerful computers to also try out the experience of Half-Life 2: Survivor.[23]