The Armored Personnel Carrier (APC) is a Combine armored transport used by Overwatch units. It first appeared in the Half-Life 2 chapter Point Insertion and is first seen in combat in the Canals. 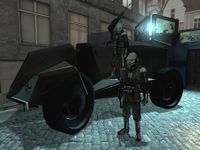 A parked APC, with Civil Protection units on guard.

Combine APCs are adequate for a number of tasks. In urban areas, APCs are used to rapidly deploy Civil Protection teams to trouble spots. Outside the cities, both Civil Protection and Overwatch forces use APCs extensively to patrol isolated areas such as the Canals and the Coast, where they are occasionally airlifted in by Dropships to patrol highways and transport troops to areas in need of maintenance or guarding. They can additionally function as electrical generators to reactivate Restrictors and power Force Fields. As the main assault vehicle of the Combine, APCs are armed with guided missiles and a powerful mounted Pulse rifle. The missiles are fired through launch tubes placed between the two front platings, and the pulse rifle is installed on a swivel turret near the top viewport. The pulse turret may be remotely operated, as nobody is visibly seen manning it.

As its name implies, most of the APCs in City 17 are parked and repaired in the APC Garage, a human warehouse-turned Combine facility in the Canals.

The APC made its debut in the chapter Point Insertion in Half-Life 2, where it is seen on the streets of City 17 with Metrocops. More of them are seen in the Canals where several participated in the pursuit of Gordon Freeman. One APC is seen reactivating a Restrictor on the coast, and another is parked at the Petroleum Station along Highway 17 where it powered a Force Field which prevents the player from advancing with the Scout Car until the APC has been pushed far enough away to have the cable disconnected. To achieve this, its parking wedges must be pulled out so that it will roll off from the cliff. More APCs are used during the City 17 uprising to counter the Resistance offensive.

In the Episodes of Half-Life 2, not many APCs were encountered. Some of them are seen combating Antlions to little success in the ravaged city, and two are seen towing an Advisor Platform in the Outlands.

Although powerful and extremely sturdy, APCs are vulnerable to damage from certain weapons. Hand grenades, SMG grenades, rockets, and the Hunter-Chopper gun mounted on the Airboat all damage the APC to varying degrees. As the APC takes damage, pieces of its armor start to fall off until it eventually explodes and disintegrates. Additionally, much like how a Gunship can shoot down the player's missiles, the APC missiles can be shot down with the Airboat's pulse gun.

Like Striders, airlifted APCs can also be destroyed midair, so it is advised to destroy them before the Dropship reaches its destination or simply escape quickly to avoid prolonged battles.

Since originally the Combine were to recycle and reuse human materials for their needs, they were also to reuse existing military vehicles from Earth, trains (which is still the case in the final version[4]), school buses, tanks or APCs, most of which can be identified. When this concept was dropped, an entirely new model was created by Viktor Antonov in the current Combine style. The earliest APCs consist in four different static brushes apparently based on the French VAB (an amphibious APC entered in service in 1976) or another existing APC. The first one is a basic troop carrier with no particular equipment (a simplified version, with rubber tires, can be found in the map e3_seafloor). Two others are equipped with heavy cannons, one of which has six wheels instead of four. While these two feature two cannons, the four wheeled has a variant with a single cannon (see VanceHQ, c17_01_15, train_depot06 or apc_canal for these three versions).[5] The fourth type is a flying version, simply nicknamed "Shuttle", equipped with wings and two rear reactors emitting red lights (pairs can be seen flying in c17_01_15 or sky_walk10).[5] The first known model to be subsequently created is mostly the VAB brush turned into a model. The first trailer for Half-Life 2 shows it in the map e3_terminal,[6] and its preview image can be found in the Half-Life 2 leak's model files, while the associated model is the current APC, without textures. The second known model is apparently based on the American V-100. However, a version made it into the final game as it can be seen above a crushed car in the Half-Life 2 chapter Anticitizen One. The last known previous version is the one featured in the Half-Life 2 leak, which is slightly different (the front mudguards are more covering the wheels, like in the original concept art, and the bodywork is rusty).[7]

Remains of the APC drivable feature in retail Half-Life 2.

The APC was originally to be a player-driven vehicle. On some occasions the APC could also be used as a disguise,[10] allowing the player to stay undetected in Combine territory. This feature was to be showcased in a cancelled E3 2003 demonstration "Outpost".[5] Playtesters found that the slow movement was not as satisfying as the Buggy, and it was recast and used by the Combine forces only.[2] In the Half-Life 2 leak "scripts" folder can be found the script file for the driveable APC, named "driveway.txt". There it is said that the vehicle speed was to be of 15 mph (c. 24 km/h).[7] In the chapter Point Insertion, remains of that feature can still be found near the rooftops: in the map d1_trainstation_03, when the player jumps on the street (with god mode enabled) and reaches for the two APCs that finished their course on the right, using the "Use" key will trigger something. In the Xbox 360 port of Half-Life 2, the screen turns beige, controls for it show up, and they can be driven. On PC, the player will only find themself under the vehicle, and nothing more will happen. Pressing the "Use" key again will bring the game back to normal. That feature was brought back in several Source mods.

The APC was mentioned as an example for creating vehicles in the Spore Prima Official Game Guide. The example is called the "Combined SPC", and in its description it notes "...make sure that its targets don't escape with even half a life."