Civil Protection[6] is the designation of the Combine's oppressive police force in all Combine-controlled urban areas on Earth, including City 17. Its officers are named "Metro Cops",[2][3][7] while the spelling "Metrocops"[8] is also used. "CPs"[6] is mostly used by the Citizens and Resistance members to refer to Metro Cops. The entity uses the term "Metropolice" (the original term[9][10] ), and the subtitles use "MetroPolice". The Overwatch Voice simply uses the term "Protection Teams".[6] They are mentioned to be part of an entity known as the Ministry of Civil Protection.[7]

Part of the Combine Overwatch,[1] Civil Protection officers are ordinary human volunteers who have "willingly" joined the Combine,[11] either for more privileges, such as additional food, better living conditions, an increase in authority and status over others, or out of genuine sympathy and identification with the Combine's aims. As such, they are not bio-mechanically modified in any way, unlike the two other Overwatch units. Barney Calhoun is notable for having infiltrated the Combine by joining the Civil Protection ranks as an undercover Resistance member.

A Civil Protection officer on watch during a sweep while another passes through a forcefield.

Civil Protection officers wear white masks hiding their faces, with built-in vocoders to disguise their voices; these each contain a radio and air filters, and appears like a cross between an old Soviet PMG and a PBF gas mask. They also wear a combat vest, leather boots with a black-green uniform, an armband on the right arm, with "c̄17:i4" emblazoned on the armband written in a squeezed Impact font and "C17" in the back of the collar. For City 17's uprising, the Resistance has retrieved a high amount of Civil Protection combat vests for the Rebels, who wear them above their Citizen attire.

Civil Protection officers are typically armed with 9mm Pistols and Stun Batons - they are known to beat unarmed Citizens at the slightest provocation; Barney Calhoun mentions being "behind on [his] beating quota". In more critical circumstances, they will be issued with Submachine Guns (which they fire from their hip), use Emplacement Guns, and are provided with fire support from APCs and Hunter-Choppers. Some officers are also armed with a deployable Manhack and/or Flare Gun to call for help.

Civil Protection officers are almost always encountered in squads or teams (terms used by the Overwatch Voice), and will employ very basic tactics, such as covering one another and running to cover when injured or reloading. Civil Protection officers normally attack in an aggressive manner, and will give pursuit to evading suspects. The Overwatch Voice also suggests that each squad has a particular leader. They are generally kept separate from Combine military units, such as Combine Soldiers or Synths, and stay in a policing role within the cities. They travel in APCs and Dropships and are often accompanied by City Scanners or Manhacks. They are also seen stationed on Combine Watchtowers from which they can fire flares to alert the other nearby Civil Protection officers.

Civil Protection heavily communicate with the Overwatch Voice over their radios; they are thus constantly fed mission objectives, rewards, reminders, and are directed to respond to certain incidents (such as the locations of downed units or other criminal acts). Civil Protection officers do not communicate with each other like they once did as citizens, using instead complex procedure words. When a unit speaks to another unit, the unit being spoken to will say "copy" and then proceed on listening to the other unit's words. He will say "copy" to let the other unit know he has his attention. The unit that first started speaking will say the other unit's number code so the latter will know that he is the one being spoken to. The constant radio chatter usually gives away unit positions before they are visible. When a Civil Protection officer is killed, its radio emits a prolonged tone similar to that of a flatlining ECG, followed by the Overwatch Voice declaring the unit down, along with his last known location and orders to nearby units to respond.

Certain transmissions heard over the Civil Protection radios suggest that officers are rewarded with, in the words of the Overwatch Voice, "non-mechanical reproduction simulation" for good job performance. Another reward addressed by the Overwatch Voice evokes a "family cohesion" being "preserved", suggesting that a mission failure might cause trouble to the family of an officer. Other radio transmissions imply that additional privileges are gained if a Civil Protection officer has its memory replaced, this being related to the promotion to Combine Soldier or Combine Elite by willfully surrendering more and more human features and characteristics. Another transmission suggest that Civil Protection officers are provided with "anti fatigue rations" of at least 3 mg.

Civil Protection conducting an inspection on an apartment block.

Civil Protection are first encountered in Half-Life 2 immediately after Gordon Freeman departs from a train inside the City 17 Trainstation. From the very beginning of the game, their brutality can be witnessed involving shoving a citizen into stack of suitcases for trying to locate his luggage as well as making various arrests on other citizens. During the opening chapter, they seen patrolling the city's plaza and streets, however when Overwatch detects a miscount, Civil Protection launches a raid on an apartment in an effort to apprehend Gordon. Shortly thereafter, Alyx Vance rescues Gordon from a group of Civil Protection officers who attempt to ambush him in an abandoned warehouse. Once Gordon departs from Kleiner's Lab, he is pursued aggressively by Civil Protection through the trainstation and surrounding canals leading to Black Mesa East.

During the Uprising, Civil Protection battle with Gordon and the Resistance throughout the streets of City 17.

Civil Protection appear briefly in Half-Life 2: Episode One towards the end of the game, ambushing Gordon Freeman, Alyx Vance and Barney Calhoun as they attempt to lead groups of citizens to a train in an effort to evacuate them from the looming destruction of the Citadel and City 17. Barney mentions that the remaining CPs are having second thoughts of still defending the city in light of its impending doom.

Civil Protection in Half-Life: Alyx serve a minor role compared to Half-Life 2. They are never directly fought, but they are seen in the first chapter either patrolling the streets or herding Citizens into prisoner transport trucks. After a shipment of Combine mini-reactors is intercepted by Eli Vance and Russell, Overwatch dispatches Civil Protection to conduct what Olga refers to as "not a routine sweep" of the surrounding area. Shortly thereafter, Alyx Vance is briefly detained and held inside prisoner transport truck by two Civil Protection officers before being rescued by Russell's drone.

Outside of the opening chapter, Civil Protection are not seen or encountered again.

Civil Protection officers are not as organized and effective as the two other Overwatch units, and generally use weaker, more basic weapons, and are not very accurate. They almost always work in groups, so when in a firefight with a squad or two, it is advised to hide as much as possible and shoot while they are reloading. As almost all of the combat they encounter is against unarmed and untrained Citizens, they will appear as being inexperienced with firefights against tougher, more competent opponents. Civil Protection officers also do not carry out melee attacks unless they are armed with a Stun Baton.

In the early Half-Life 2 levels, a few pistol shots will kill an officer. In close quarters, a couple of hits with the crowbar will kill them. If they drop a Stun Baton in combat, it can be used as a battery for the HEV Suit. Later in the game, the best weapon to use against them is the Submachine Gun which can easily dispatch large numbers of them at once.

In the Canals levels, many explosive barrels are scattered on, under or near wooden structures where an officer tend to stand. It is advised to shoot the barrels for more effective (and spectacular) results. Civil Protection officers will also occasionally use the barrels as improvised grenades, rolling them to Freeman after igniting them. It is advised to shoot them while they are still rolling. Civil Protection officers also often tend to throw themselves in the path of the Airboat or stand on breakable wooden structures, in a similar way to the Combine Soldiers with the Buggy in the Coast levels. This should be used as well for more effective results. 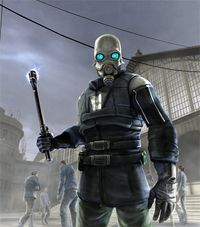 The Metro Cop was originally referred to as the Combine Guard (not to be confused with the Synth unit of the same name), which evolved into both the Metro Cop and the Combine Soldier. Much like the Combine Soldier in the final version, Civil Protection originally also had its elite variant, the Elite Metro Cop. Metro Cops were originally to have other colors on their uniforms, such as red or yellow, and the right armband colored red. One version also depicts them with bright blue eyes.[12]

Originally, the Civil Protection was to be named "Metropolice", name that survived in the Civil Protection entity, "npc_metropolice". Many Metropolice posters were to be seen around City 17, but were removed when the team thought that the Combine did not need to rely on subtle messages to achieve their ends.[9] Three posters, designed by Randy Lundeen, are known: one involves the Consul, an early Citadel, Combine Guards, and the slogan "It's great to be part of the greater good".[13] Two other posters, including again Combine Guards, bear the ironic slogan "They're here for you".[9][10] Some of these posters are featured in WC map pack maps, when propaganda was still an important storyline tool for the team.

A Civil Protection headquarters building was originally to be seen near the Manhack Arcade, with above it the sign "C17 MP", or "City 17 Metropolice", in the WC map pack map c17_04 and its variants.[14] In Raising the Bar, it is nicknamed "Cop Station", and was to be seen after and not before Kleiner's Lab.[15] CPs were also to stand in Door / Guard Towers, hanging cabins used either to operate gates or guard an area. Moreover, they were to use early Combine Watchtowers near Sensor Gates, another cut Combine device.

According to Valve's animator Doug Wood, the Metro Cop went through several sets of animations during its development. None of them felt right until the team decided to give the CP a more bullying personality. Then Wood put a slight swagger into the CP walk and changed the chest posture to a more leading position.[3]

In the Half-Life 2 leak files can be found several early Metro Cop sounds, with the prefixes "mc1ans" and "mc1que". They mostly consist of chat between at least two different idle cops (as there are two different voices). Sometimes a bit hard to make out, these sounds include things like "You're in helluva a mood", "Watch yer mouth", "You expect me to believe that?", "Yep, this was definitely the best career choice I ever made", "I'm feeling pretty good about myself, ok?", "I wouldn't have kids even if they let me", "Supposedly we're getting a raise next week", "Your wife doesn't like me, does she?", among others.[10] Setting Metro Cops on fire caused them to start screaming, while they do not in the final game.

The Half-Life 2 soundtrack track "CP Violation", played during the chapter Route Kanal, refers to the Civil Protection and Gordon running against each other to Black Mesa East. One of the most fast-paced tracks of the soundtrack, it also has a shorter remixed version. CP Violation is also a concept in theoretical physics.

Combine OverWiki has a list of quotes for Civil Protection.