This article describes the game modes in the multiplayer portion of Half-Life, also including the modes from the ports of the game and the expansion packs.

Half-Life features a deathmatch mode, and a team deathmatch mode, and it supports up to 32 players. The players are given the ability to customize the appearance of their characters, and can change their character model and its skin color from the options. The players can also select a "spraypaint image" from a list, or import a custom image, and apply it to any surface in a level. Some of the weapons have a different behavior in the multiplayer.

Half-Life and other GoldSrc-based games used World Opponent Network, an online gaming service, created by Sierra, until it was shut down on July 31, 2004, and replaced with Steam.[1] The multiplayer portion of Half-Life was included in the retail version of Counter-Strike as a mod. It was later ported to the Source engine, and released as a standalone game, under the title Half-Life Deathmatch: Source, which is barely functional, and has many game-breaking bugs. The maps were updated for this version.

The PlayStation 2 version features Head-to-Head, a two-player offline multiplayer game mode played via split-screen. There are six playable characters and ten maps. Due to performance issues, the weapon viewmodels are not visible to the players, instead represented by a weapon icon in the bottom left corner in each player's viewing area. No on-line capabilities are present as the development materials for Sony's planned internet features were not ready at the time and couldn't be implemented before the release of the game. There is also Half-Life: Decay, an exclusive multiplayer cooperative mode where the players take on the roles of Gina Cross and Colette Green. They must work together with the assistance of the science team to seal the rift between Earth and the borderworld Xen.

Although not supported, the multiplayer functionality works, but is barely functional in this version.[3] The multiplayer menu appears to be same as the one in Quake. There is no map or model selection. The only available map is warez_dm, which appears to be an early version of Stalkyard. The default player model is Ivan the Space Biker. Like in the singleplayer mode, the players have unlimited ammo, and they never need to reload their weapons.

Valve originally intended to include several multiplayer modes in Half-Life. One concept they initially announced was a mode featuring aliens against humans. The player would have been able to select a Xen creature from the singleplayer game as their character, each class possessing its own unique strengths and weaknesses.[4] Gearbox also had a similar concept in mind for the multiplayer component of Opposing Force, planning to have a capture the flag game mode featuring aliens battling the HECU soldiers. This concept was dropped early in development so they could focus on the singleplayer portion of the game. According to Randy Pitchford, it didn't make sense to invest time into it as, between Team Fortress Classic and other existing multiplayer modifications, the multiplayer aspect of Half-Life was well covered.[5][6]

Dario Casali stated that the map Boot Camp was originally designed for a multiplayer game mode called Loot which was ultimately cut from the game. The mode required a large map with varied areas to fight in and explore. Each round began with teams of two people each who shared items and damage, and they had to hunt around the level for a bag of loot as well as weapons. Players could only carry one weapon at a time. When the loot is found, the players had to bring it back to the flag pole area to win the round. Dead players had to wait for the next round to spawn again. Since the developers didn't have enough time to code additional multiplayer game modes, the level was converted to a regular deathmatch level.[7] 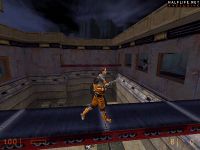 Soldiers present in an early screenshot of Subtransit.

There was to be a cooperative mode that was planned to use its own separate set of individual maps.[8] These maps were to be larger than the regular maps used for the singleplayer mode, the developers wanting coop to feel distinct with self-contained scenarios.[9] This mode was eventually cut due to time constraints.[10] The map Subtransit was possibly meant to be used as a coop mode level. There are navigation nodes scattered around the map, likely used by the soldiers seen in the early screenshots. Cooperative-specific starting points for players (info_player_coop) are also present.

In the standard deathmatch mode, there was to be a multiplayer map with a table that could be used to call in air strikes on a marked area on the map, a concept similar to the Tactical Map featured in the singleplayer mode. There was also a king-of-the-hill type of map where the players had to fight each other to reach the top of the hill, and press a button to blast everyone else in the map. The same concept is used in the map Crossfire.[8]

Originally, Half-Life was slated to only include a male (Gordon Freeman) and female (Gina) player model. However, it was planned for players to be able to import a scanned photo of their own faces to apply to these models.[11] It was also mentioned that the Crossbow could fire arrows with the player's name written on them, and these arrows would pierce and stick in enemy players and remain in corpses.[12] This was later removed as it was too difficult to read the names on the arrows, deeming the feature pointless.[13]

Aaron Stackpole created an internal translation of all of the original Quake deathmatch maps to Half-Life that were never released initially due to rights issues.[14]

The Dreamcast version was announced to have on-line multiplayer support.[15] However, this portion of the game was to be released as a separate product at a later date.[16] This second multiplayer-focused title was planned to have ports of Half-Life deathmatch, Opposing Force deathmatch (including its Capture the Flag mode), Team Fortress Classic, Counter-Strike, and one or more of the popular multiplayer modifications.[16][17] While the leaked version does not feature any multiplayer modes, unused multiplayer content can be found in the game files, including a player model and an exclusive map called Office. This map was later included in the PlayStation 2 version. Two other models, hgrunt.mdl and scientist.mdl can be found in the player model folder, but these are non-functional as they appear to be identical to the models used in the singleplayer mode. The textures for Datacore and Frenzy can be also found in the game files.