"My goal is simple: As a right now, you are all maggots! You will not speak until spoken to, you will not sleep unless told to do so! When I ask you to jump, you will reply with "How high?"! Do you get me?"
― Instructor Barnes[src]

The Santego Military Base is a United States Marine Corps-operated military base located in Arizona, west of New Mexico, where the Black Mesa Research Facility is located. It appears in the training chapter for Opposing Force, Boot Camp.

There Adrian Shephard receives his Advanced Training from before March 3 to c. March 15, 200-, under Drill Instructors Barnes and Sharp, among others. The base is guarded by the Military Police whose members prevent access to restricted areas, and operate on-base vehicles such as Osprey Heliplanes and M44 cargo trucks.

Santego includes barracks, offices in the Tactical Operations Command, helipads, and the Advanced Training Facility, which includes the following sections:

During Shephard's training, the G-Man came several times to check on him, around March 3 and March 7. 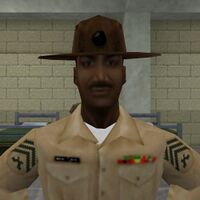