"There you are. I wondered what was keeping you. Hope you didn't have any trouble finding me. Uh oh."
― Alyx Vance[src]

The Hydra was to be a massive colonial organism made out of three neon blue tentacles that went up to the surface. Each tentacle was to end with a different "head". Its body was to be made of gelatinous, transparent flesh, with organs clearly visible. It was to be met during the City 17 uprising, in and above the underground sections set between Alyx's kidnapping and Barney's rescue from the Overwatch Sniper.[1][2]

The deployment, left and right movements of the Hydra are completely controlled by the game code.[1][2] The only real model animations are when it is idle and when it strikes, as well as the scripted animations for the E3 demo.[1]

The Hydra's design bears similarities to the Tentacle from the original Half-Life. It is also reminiscent of the real-life hydra, an invertebrate freshwater animal, notably a transparent body, and the Ancient Greek serpent-like chthonic water beast that possessed 9 heads, Half-Life 2’s Hydra also having several heads.

Several early maps are known to feature the Hydra, and can be found in the WC map pack and the playable Half-Life 2 leak.

The Hydra impaling a Combine Soldier in the E3 2002 demo "Strider".

The earliest use of the creature consists of a scripted sequence set in a small sewer area, designed for E3 2002, and to be featured at the end of the demo "Strider" (in the map e3_strider, also known as e3_sewer), in which Gordon and Alyx in her original model flee Strider attacks through a sewer system, only to be met with a Hydra. a Combine Soldier suddenly appears, and gets impaled by one of the Hydra's three heads. Then the other heads appear and all turn on the duo, ending the demonstration.

The Hydra part of the demo "Strider" was reused for the end of the E3 2003 demo "Tunnels", set in the map e3_under (e3_hydra also exists, and features the Hydra sewer only). The scene is almost identical, except that it features the Combine Soldier and Alyx models from the playable leak, and Gordon starts the demo separated from Alyx, to be reunited with her in the Hydra sewer.

The areas seen in the 2003 demo evolved into many more maps designed specifically for the creature by its coding and AI developer, Valve's Ken Birdwell, with longer underground sections filled with several Hydras. These can be found either in the WC map pack or the playable leak. In the mappack, the maps are very detailed and some have been recycled from Canals maps, such as maps derived from the d1_under series, namely d3_under_01, d3_under_02, d3_under0102 (featuring 10 Hydras, Metrocops being impaled by them and Manhacks). The Hydra maps in the playable leak are just sketches with mostly text information and not much detail. In the map d3_c17_07 in the playable leak, Alyx chooses to stay behind for no apparent reason after Gordon defeats the Gunship that destroyed the bridge (somehow explaining why the duo had to reunite in e3_under), while in the final game the bridge is already destroyed and Alyx gets kidnapped. The next map, d3_under_01, features a small sewer section, which is said to feature Hydras. The next map is d3_c17_08, set on a wide river, in which a "final Hydra battle" was to occur, as written in the map, to be followed by the Barney vs. Sniper part.[1][3]

When the Hydra was cut from the final game, these large sections had to be reduced and turned into the small version of d3_c17_08, which is now the equivalent of d3_under_01, replacing the wide river and reusing parts of the map featured in the E3 demo "Tunnels" and still set between Alyx's kidnapping and Barney's rescue from the Overwatch Sniper, in the Half-Life 2 chapter Anticitizen One. Instead of leading into the Hydra sewer, the pit with the many catwalks after the Manhacks leads into a large hangar with a diagonal elevator. 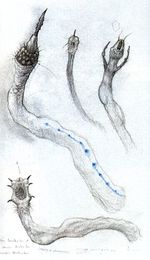 Concept art for several heads, including the pointed one and the "smacker" one.

One of its "heads" was to be pointed and capable of piercing through its victims, while the other's behavior is unknown. The pointed head model is unnamed and appears first in the scripted sequence; the two others appear right after, at which point the scripted sequence stops. One is named "seer", the other "smacker". "Seer" was probably to act as some kind of sensor (given its name and its finger-like protuberances), while "smacker" was probably to smack victims like a fist, or grab them like a hand, given its shape.[1]

The Hydra was Birdwell's pet feature, and a monster he wanted in Half-Life 2 from the start. While designing the areas of the game that would heavily feature the Hydra, he personally spent about six months on and off getting all the movement algorithms and physics to a working state. Everyone at Valve was pretty skeptical about his work on the creature when he started, so he kept it in a pretty low profile. However, once he got some of the early rough AI drafts up and running and showcased it to his colleagues, they got very excited about it and started pushing him to hurry up and finish it.[2]

But the closer it got to being done, the more its fatal flaw was becoming clear: while this great big glowing giant worm looked good while fighting other NPCs, snaking through the map, knocking stuff over and putting on a great show, it was unsatisfying in the first person, looking no more than a non-descript blob doing something vague, then the player would be dead without being able to see properly what they were fighting.[2]

It then had to be cut. It was personally very painful for Birdwell, but he states it had to be done since when a design is not working, it has to be given up. However he adds he would still like to see the Hydra in the Half-Life and Portal universe somewhere, suggesting he would start by rethinking its AI more along the lines of an Antlion.[2] This however has not been made yet, although the NPC named "Surface" used in the Source Particle Benchmark uses a model named "Hydra.mdl", but it is different. The Particle Benchmark files also feature Hydra textures.