The Tentacle, is a large hostile alien creature which responds violently to sound and vibrations. It is first seen in a rocket propulsion test chamber in Half-Life, but is also seen throughout the series on Xen, in other areas of the Black Mesa Research Facility in both Half-Life and Opposing Force, and in the Quarantine Zone in Half-Life: Alyx as a non-hostile entity. 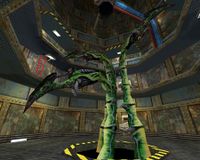 The three Tentacles in the chapter Blast Pit.

A large, green, segmented stalk supports a "head", which ends in a sharply pointed, blade-like appendage and features what looks like an eye and also two small gray "arm" tentacles near the sharp blade to grab prey. The "eye" appears to be a sensory organ, although the creature only reacts to sound and surface vibrations. Tentacles usually emanate from pits, into which they can retract when injured or in danger.

Typically several Tentacles use the same pit, suggesting that they may be appendages of a larger organism. Indeed in Half-Life, after the first Tentacle encounter, the player travels through the chasm the creature had occupied. The Tentacle's "body" encountered at the bottom of the chasm is somewhat squid shaped, with three stumps that connected to the tentacles that appear to have been severed after its death. Some concept art of the Tentacle, shows it to be cluster of three Tentacles attached to a bulbous base, which matches that encountered in the game. Although Tentacles usually come in groups or clusters of three, single Tentacles are also encountered, and the number of Tentacles present may reflect the size or stage of development of the base, or a more spread-out being, with Tentacles in various locales. Evidence that could support this assumption of a base organism or something similar is how the scientist pulled from the control room, when first encountered in the silo, is pulled down into the pit by a tentacle and possibly eaten.

Throughout the Half-Life series, only ten adult Tentacles have been encountered, of which eight are found in Half-Life while the other two are found in the expansion game Opposing Force. In Half-Life: Alyx, two developing tentacles can be found growing in a shower stall in the Northern Star.

In Half-Life, the first encounter is in the chapter Blast Pit where the player encounters three tentacles in a Rocket Propulsion Silo of Sector D. These tentacles act as a type of boss. As the player's weapons are useless, the player has to risk himself through the Tentacle-filled Silo and reach other places so that he can provide Oxygen, Fuel and Power to the Rocket Engine. After that, the player again has to risk through the same Silo back to the Control Room and Activate the Rocket Engine. The intense heat of the engine kills the Tentacles and the player progresses further.

The Tentacle is later encountered in the chapter Surface Tension. The tentacle here is surrounded with various items. The player has to distract the Tentacle in order to get the items. Later, a Tentacle is found in the chapter Interloper, after the first teleportation in that chapter. It is found outside the cave where the player teleports in. In the same area, three more Tentacles are present. This is the last encounter with the Tentacles and the player has to distract them in order to progress.

In Half-Life: Opposing Force, only two Tentacles are encountered. It is in the chapter Vicarious Reality where the player finds them in an Unconstructed Observation Area in the Biodome Complex. The player has to distract them to pass through and is unable to kill them.

Developing "baby" Tentacles can be seen in the City 17 Quarantine Zone in Half-Life: Alyx. They prove harmless and pose no threat to Alyx Vance, but they do continually try to face her, indicating they're able to detect her presence. They often appear in pairs.

In terms of behavior, Tentacles aggressively target prey in the immediate vicinity of their pits. While searching for prey, they gently tap the surrounding area, but when even the quietest noise or vibration is detected, the Tentacles will furiously and repeatedly strike at the location where noise or vibration was detected. When a Tentacle comes in contact with prey, it will attempt to pull it with their small grey "arm" tentacles near the blade into the pit, presumably where it is consumed and digested. In the game, this behavior is witnessed firsthand by the player when a scientist is grabbed by his leg and taken, screaming, into the pit at the base of the tentacles.

In the game, Tentacles cannot be destroyed with the player's arsenal, but shooting the stalk a few times will temporarily drive the creature into its burrow. Great care must be taken when moving near them, forcing the player either to silently crouch past the burrow or cause a distraction with explosives (preferably hand grenades, as those don't reveal the player's location with sound), allowing the player to sprint out of range. It is a good idea to use this tactic, as tentacles can kill the player with a single strike.

Chuck Jones designed the Tentacle and the Silo D scene where the creature grabs the scientist and hauls him screaming from Silo D-01's control room. According to John Guthrie, no one at Valve was prepared for anything like this scene. When they saw the effect it had on gamers in sneak previews, they knew they had made the right decision to put animated sequences directly into the game rather than setting them apart in cut scenes.[2]

In Online Gaming Review's early Half-Life Monster of the Week Feature preview, the Tentacle was given the taxonomic designation "Hypersuctor sensitiva".[3]

Originally, the Tentacle was able to attack the player through the doorway on the first floor of the silo. The unused attack animation[i] can be found in the SDK for the game.

In Half-Life: Alyx, early concepts for Jeff depict a baby Tentacle among the Xen flora protruding from his head. The two creatures share some similarities as they are both blind enemies that hunt by sound, are extremely deadly, and cannot be killed through normal combat. The final design for Jeff omits this use of a baby Tentacle.