The Zombie Assassin is a Zombie cut from Half-Life 2, and the only Zombie variant known to have been cut from the series. 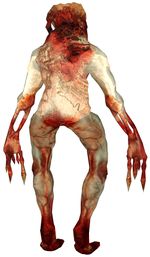 Its model can be found in the Half-Life 2 leak files, but it has no animations and no AI for the NPC are found in the files. Texture-wise, the blending between the limbs and chest/waist texture files is also not well finished, and it has missing bump maps on the arms, showing the standard checkerboard used for missing materials (fixed in our version). No sounds for it are present. The model also seems to have the wrong surface property, result in the game treating it as metal.

As seen in the model, the Zombie Assassin appears as even more transformed than the Classic Zombie, the Headcrab's rear left leg going inside the Assassin's back even further than in Classic Zombies, to reappear near the Assassin's right shoulder. The hands and feet have also turned a bright red, and the bones of the forearms have become visible.