The .357 Magnum Revolver is a powerful handgun: more accurate and powerful than the Pistols, though with less common ammunition and considerably slower fire and reload times. It is featured in most of the Half-Life series' titles.

The Magnum is a double-action revolver which fires one round. Whilst it is very powerful, it has a long reload time and low rate of fire. It has near perfect accuracy, but rapidly firing shots will cause accuracy to significantly decrease because of the weapon's fair amount of recoil.

The .357 Magnum's first appearance, in Half-Life. 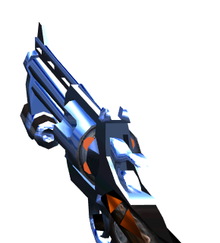 Half-Life viewmodel, multiplayer version, with scope addon under the barrel.