From Combine OverWiki, the original Half-Life wiki and Portal wiki
(Redirected from Cyril and Fred)
Jump to: navigation, search

Griggs: "Okay, Freeman! Be adequate!"
Sheckley: "What the hell does that mean, anyway?"
Griggs: "Ah, I dunno, sounds like something the Vorts would say."
―Griggs and Sheckley in the Victory Mine[src][listen]

Griggs and Sheckley, respectively nicknamed Griggsy and Sheck, are Rebels who appear in the Half-Life 2: Episode Two chapter This Vortal Coil.

Griggs and Sheckley were stationed at the main junction of the Victory Mine. Valiantly defending the area from Antlions for a long enough period to have painted elaborate designs on their reprogrammed turrets in the vein of WWII nose art,[2] they seem to have established a mutual camaraderie. 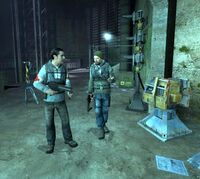 Griggs and Sheckley welcome Gordon to their outpost.

Digging deeper through the Victory Mine, Gordon Freeman discovers the Resistance outpost manned by Griggs and Sheckley. He is briefly mistaken for an Antlion by Griggs due to the Antlion Detector lighting up, but after a short time, he is given supplies and reunited with the mortally wounded Alyx Vance who is being taken care of by the Lone Vort; both were apparently given shelter by the Resistance fighters. Sheckley explains to Gordon how the sensors at the tunnel entrances work, and the group then prepares their defenses.

Soon, Antlions approach in great numbers. Griggs and Sheckley, having Hoppers, their last two turrets, and Submachine Guns at their disposal, and assisted by Gordon, have to deal with progressively larger and larger swarms until backup arrives in the form of several Vortigaunts. After eliminating the threat, Griggs and Sheckley stay to help protect Alyx, while Freeman and the Lone Vort go deeper inside the mine to retrieve an essence from the Antlion hive that would heal her. Gordon soon returns, bringing the extract with him. With Alyx conscious and accompanied by the Vortigaunt, he leaves the Victory Mine, while Griggs and Sheckley bid the team farewell.

"They’re a team through thick and thin—and Griggs can be pretty thick."
―The Orange Box Prima Guide

Despite his combat experience, Griggs is rather naïve, and, seemingly, a little thick. He’s not afraid to state the obvious, ask dumb questions, or just annoy his companion.[3] He often panics during Antlion assaults, but his lightheartedness provides comic relief. Griggs is a combat medic, and unlike other medics, he can throw Medkits to Gordon instead of having to be next to him to heal him. Griggs is the only character in the series to exhibit this behavior.

As opposed to his colleague, Sheckley is stoic and professional. He has inﬁnite patience when it comes to his partner, although under pressure he’s not above screaming at his buddy.[3]

Early diagram of the Episode Two journey showing Chet and Erik near the Muscle Car bridge.

Before Griggs and Sheckley came to be, a different duo was to appear in Episode Two. They were originally named Chet and Erik, referencing Episode Two writers Chet Faliszek and Erik Wolpaw,[4] but they were later renamed by Marc Laidlaw to Cyril and Fred, after science fiction writers Cyril M. Kornbluth and Frederik Pohl. During these early stages of development, the duo was to appear in the outpost near the Muscle Car bridge in the map ep2_outland_06.[1][4][5] The two were described as being car nuts and the original builders of the Muscle Car. One gag that was cut from this initial meeting with the characters was Griggs seeing legs sticking out from under a car and, assuming it was Sheckley, pulling them out only to reveal it was actually a Zombie torso.[6] Although the owners of the Muscle Car were cut from the final game, the Lone Vort, after emerging with Gordon and Alyx from the Victory Mine, mentions knowing "humans with a vehicle not far from here." References to a vehicle can be found in the Cyril and Fred audio file names listed in an Episode Two script file.[5]

The final design of Griggs and Sheckley was inspired by Abbott and Costello.[2][3] According to Erik Wolpaw, Sheckley was named after the science-fiction author Robert Sheckly.[7] Originally, both were only minor characters who informed Gordon how to defend the Vortigaunts from the Antlions before getting killed fairly quickly, leaving the player alone to kill the Antlions. However, the developers discovered that this led to the players being unsure of how to fight the battle and would often make them use the wrong strategies. This led to the team deciding to keep Griggs and Sheckley, making them constantly informing the player of how to fight the battle and even suggesting which tunnels to defend. This gave the team the idea of making them two humorous characters whose in-game conversations could serve as comedic relief during the battle.[2]

Griggs and Sheckley's comment about not stepping on the Grubs was originally intended for comedic effect. However, the developers discovered that some players took this comment too literally and would spend the rest of the level avoiding grubs in fear of spawning more Antlions.[2]

According to the actor's resume, Griggs may have been originally voiced by Earl Alexander, best known as the voice of Louis in the Left 4 Dead series.[8][a] Adam Baldwin recorded many more lines for Sheckley, but the character's full set of responses was not implemented into the game in time, leaving him only with his scripted dialog.[1] Temporary placeholder dialog for both characters had been voiced by Laidlaw himself.[9]

Examination of the map file reveals that Griggs and Sheckley are virtually invincible as they heal back to full health every time they take damage. They are nevertheless scripted such that, in the unlikely event one of them dies, they no longer chat with each other. Furthermore, both NPCs have their ammo resupply properties set to non-default values: 45 Submachine Gun bullets for Griggs and 3 Shotgun shells for Sheckley. However, an unchecked flag, in addition to Griggs's role as a medic, prevents them from ever supplying the player with ammo.

Combine OverWiki has a list of quotes for Griggs and Sheckley.
Retrieved from "https://combineoverwiki.net/index.php?title=Griggs_and_Sheckley&oldid=443197#Behind_the_scenes"
Categories: