"A shepherd must tend to his flock, especially when they have grown… unruly."
― Father Grigori[src]

Father Grigori is the only known surviving occupant of Ravenholm during the events of Half-Life 2. He appears to be mentally unstable, but is generally friendly. In Half-Life 2, he helps Gordon Freeman survive his trip through Ravenholm and escorts him to the mines on the far side of the zombie-infested town.

Although not much about Father Grigori's background is revealed in-game, it is known that he is not a native of Ravenholm, but rather sought it out during the Combine invasion, where he did his best to minister the occupants, implying that he is not actually a priest.[3] After the Combine bombardment of Ravenholm, he was angered and became mentally unstable, seeing it as his plight to liberate the town's zombified residents through death.

The presence of a survivor in Ravenholm is first revealed with ominous Biblical-sounding phrases heard quietly near the first propeller trap encountered by Gordon. Gordon finally sees the face of Father Grigori, after having battled through several groups of zombies and headcrabs. Above a flaming mound of zombie corpses, Grigori greets Gordon, telling him that he is free to use his traps, but to be careful not to fall into them himself.

He later shoots a Fast Headcrab that was about to attack Gordon from behind, and advises him to be vigilant in Ravenholm. Later, he also throws Gordon a shotgun, telling him "Aim for the head".

When Gordon finally meets Father Grigori on foot, it is near the church mentioned earlier by Grigori. From atop a roof, Grigori can be seen below, telling Gordon that he is moving a tram to the rooftop to allow him to come down. After Gordon has gotten into the tram and is face to face with Grigori, he informs him that they will have to travel through the graveyard to reach the mines. He then accompanies Gordon through the graveyard, helping him to fight off the zombies before allowing him to escape into the mines.

Father Grigori's eventual fate is left ambiguous; if the player remains at the gate after having been "escorted" to the mines, Grigori continues shooting at zombies, and tells Freeman to "Get going," and that "No one wants to stay in Ravenholm." Eventually, Grigori will detonate some nearby fuel tanks as zombies break out of a crypt; he runs through the flames laughing and firing before taking cover in the crypt entrance and continues killing zombies for some time, then disappears inside.

It is unknown whether or not Father Grigori survived the destruction of the Citadel. The time and distances involved are sketchy, but as Gordon manages to reach Black Mesa East in about 2 to 3 hours or so, and Ravenholm is just outside Black Mesa East, it can be judged that Ravenholm is around 20–40 km from City 17. Seeing as the forests outside City 17 are relatively untouched, it can be reasoned that Grigori escaped the Citadel explosion. It is not impossible that he escaped by waiting out the fire and running away, but being slightly insane, he may have fought to the end anyway. In Raising the Bar, it is stated that his eventual fate was left up to the players to decide, and that there were no plans to re-use the character in the series.

Father Grigori is a middle-aged man with a shaven head; he dresses in traditional embroidered clothing and red Converse sneakers covered with Headcrab ooze.

Around his neck, he wears a crucifix, signifying his religious position and outlook, which seems to have taken a turn for the extreme as he tries hard to return his "congregation" to their human state, or relieve them. He has a cross pierced into the skin of one of his hands.

His canny ability to move around Ravenholm quickly and inconspicuously suggests he is fast on his feet and agile, or that he has set up many escape routes that the player never uses.

Father Grigori is mentally unhinged, and can be heard ranting, uttering disjointed biblical references and laughing manically while hunting zombies in Ravenholm. Grigori probably has a form of chronic reactive psychosis, which is not a mental disorder in itself, but psychosis brought on by the experience of a severely traumatic or stressful event.

Grigori appears at various points in Ravenholm, generally standing at a high vantage point from which he proceeds to kill the various zombies in the areas below. Zombies seem to prefer to attack the player when given the choice, except during the final sequence leading up to the mine entrance. Because of the limitations of his weapon, he has to reload frequently, so he is vulnerable to the zombies that can reach his position, such as Fast Zombies, in significant numbers or when operating at ground level.

Like Alyx Vance, Father Grigori seems to have rapidly regenerating health, making him very hard to kill, so players shouldn't generally need to concern themselves if he is attacked, unless the numbers get too large or explosive weapons are used. He will cry out in anguish when he is overwhelmed and requests the support of the player.

The Father tends only to fire at enemies short to mid-range since his weapon does not have a scope, so he will often fire while retreating back from a zombie if they reach his location. Additionally, while his weapon is very powerful and is capable of killing a zombie in a single shot, it must be reloaded every two shots thus hindering its usefulness against large groups.

Father Grigori has also rigged a great number of traps throughout Ravenholm, ranging from spinning blades to flaming pits. These traps are able to be used by the player throughout the town to kill zombies to great effect without expending somewhat rare ammunition.

Father Grigori is the only character in the Half-Life series who uses Annabelle. He fires the Annabelle with great accuracy, almost always hitting the targeted zombie's head. He advises Gordon to to kill zombies quickly also by aiming for their heads. He seems to have large supplies of ammunition, and provides Gordon a shotgun before directing him to the town church. 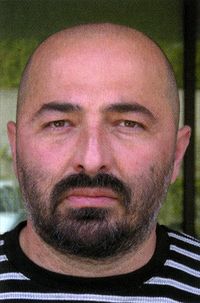 Combine OverWiki has a list of quotes for Grigori.
Retrieved from "https://combineoverwiki.net/index.php?title=Grigori&oldid=430748"
Categories: